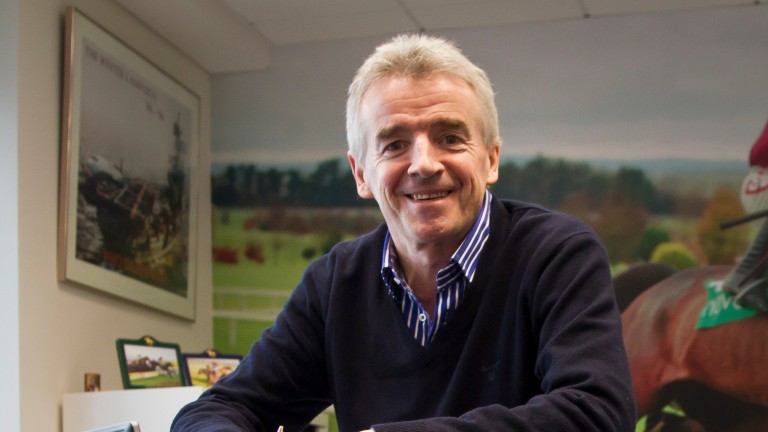 Michael O'Leary: "We must protect Tiger Roll from the idiotic opinion of this handicapper"
Patrick McCann (racingpost.com/photos)
1 of 1
By David Carr and Brian Sheerin UPDATED 6:53PM, FEB 15 2022

Gigginstown House Stud boss Michael O'Leary has laid into the handicapper and declared Tiger Roll will not be handed a shot at equalling Red Rum's record of three Grand National triumphs due to what the powerful owner described as a "ridiculous handicap rating".

O'Leary has blasted British handicapper Martin Greenwood for handing Tiger Roll a rating of 161, labelling the mark "unfair" and "absurd" when ruling Tiger Roll out of this year's race.

He said: "Tiger Roll is now 12. He is clearly not as good as he was at eight or nine, yet the UK handicapper now rates him 2lb higher than his 159 rating in April 2019, when he won both the Boyne Hurdle and the Grand National.

"This rating is absurd and unfair on a 12-year-old chaser. It is a pity that the handicapper won't give Tiger Roll either a fair rating or a fair weight in the Grand National, where he could at least try to emulate Red Rum's three Grand National wins.

"However, the handicapper sets the weights, and even if he is manifestly wrong in the case of Tiger Roll, there is nothing we can do about it other than remove him from the race, since we don't believe it is fair or safe to ask him to carry close to top weight at the age of 12.

"Since the top two horses in the handicap won't run at Aintree this year, Tiger Roll will have to carry either 11st 8lb, or 11st 9lb at the age of 12, which is three years after he carried 11st 5lb at the age of nine to win the great race in April 2019." 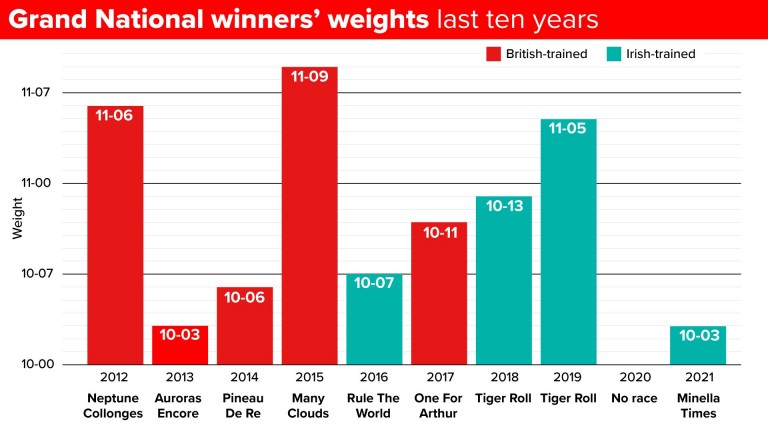 O'Leary added: "Since we are responsible for the welfare of Tiger Roll, we must protect him from the idiotic opinion of this handicapper. We therefore regret to announce that he will not run in this year's Grand National.

"Instead, Tiger Roll will be trained for the Cross Country at Cheltenham and there is every likelihood that win, lose or draw, this will be his last racecourse appearance. He will then return home for his well-earned retirement here in Gigginstown for the rest of his days.

"It's sadly clear from his ratings that this handicapper doesn't want Tiger Roll to run in this year's Grand National, he won't give him a fair chance, and sadly, the race will be the poorer for his absence."

Speaking at the weights launch before O'Leary revealed Tiger Roll wouldn't be running, the trainer said: "We will see how Cheltenham goes but he has got a nice weight so the Grand National could be on the agenda."

"They [Gigginstown] pay the bills and they're entitled to their own opinion," Elliott said of the owners.

"The ground was too soft the last day for him. He is coming to himself at home and we are looking forward to running him back at Cheltenham.

"To have a horse like him is a dream come true but to win two Grand Nationals with him has just been awesome and I'm very lucky to have him. I do think there is still more in him and we are certainly not finished yet.

"He's not getting any younger and it's been a long time between drinks. He's in good form at home but it will be a big ask to go back after three years.

"But Tiger Roll is always a different horse at this time of the year. During the winter he just does what he has to do but when he gets sun on his back and a bit of good ground he's a totally different horse."

Explaining his treatment of Tiger Roll, BHA jump handicappers' team leader Martin Greenwood said: "No doubt some people will accuse me of being too lenient and some will accuse me of being too cautious. The key word is balance, the horse is not getting any younger but you've got to remember that he was very impressive at Cheltenham last year, he hammered some decent horses.

"He was on 166 last year when he chose not to run, which was a disappointment for racegoers, I believe.

"On 161, he's 2lb above his last winning National mark. Some people would argue he's not the force of old but you can't forget that Cheltenham annihilation less than 12 months ago and he put up one of the best performances in modern National history in 2019 – let's hope connections take up the challenge this time."

2022 Grand National: the full list of entries and weights for the Aintree epic

2022 Grand National: key quotes from the trainers as the weights are announced

FIRST PUBLISHED 3:00PM, FEB 15 2022
It's sadly clear from his ratings that this handicapper doesn't want Tiger Roll to run in this year's Grand National