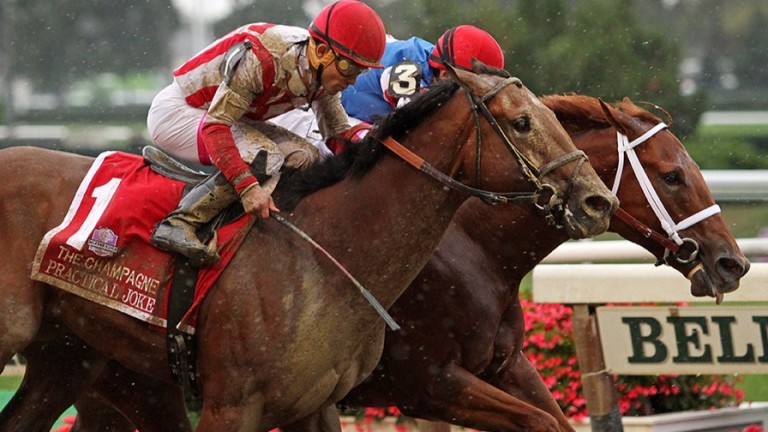 Practical Joke (near side): maintained his unbeaten record by just getting the better of Syndergaard in the Grade 1 Champagne Stakes at Belmont Park
EquiSport Photos/Jessie Holmes
1 of 1
By Nicholas Godfrey 6:00PM, NOV 4 2016

With five horses vying for favouritism, the Breeders' Cup Juvenile has an open look – but don't go thinking that means we are dealing with a substandard bunch of two-year-olds on the dirt.

Given that Pinchin would be happy to finish third, and his representative is Three Rules – who has won each of his five starts by a cumulative total of 31 lengths – then you get some idea of the talent on show.

Admittedly, Three Rules has been beating up minor company in Florida, but he has a flawless record, yet still rates an outsider in an 11-runner field loaded with potential.

There have been five Grade 1s so far this season open to two-year-old males, and all five winners are involved in this $2 million contest, won last year by subsequent Kentucky Derby victor Nyquist.

Grade 1-winning pair Gormley and Klimt head the Californian-trained contingent in a race where home advantage has been a help at Santa Anita.

Klimt represents Bob Baffert, who has won this race three times; he breaks from the rail as he bids to turn around the form with Gormley, who carries the Zenyatta colours for trainer John Shirreffs and benefited from an easy lead when beating the Del Mar Futurity winner over course and distance a month ago in the Grade 1 FrontRunner.

Classic Empire, running for the Tepin team of trainer Mark Casse and jockey Julien Leparoux, easily handled the reopposing Lookin At Lee in the Breeders' Futurity at Keeneland, while front-running Syndergaard just failed to hold off late-running Practical Joke in a ding-dong battle for Belmont's Champagne Stakes.

Dale Romans has been suggesting Not This Time could be the best horse he has ever trained after a runaway Grade 3 success at Churchill Downs, while Theory has won both starts at shorter trips for Todd Pletcher, who also trains Syndergaard.