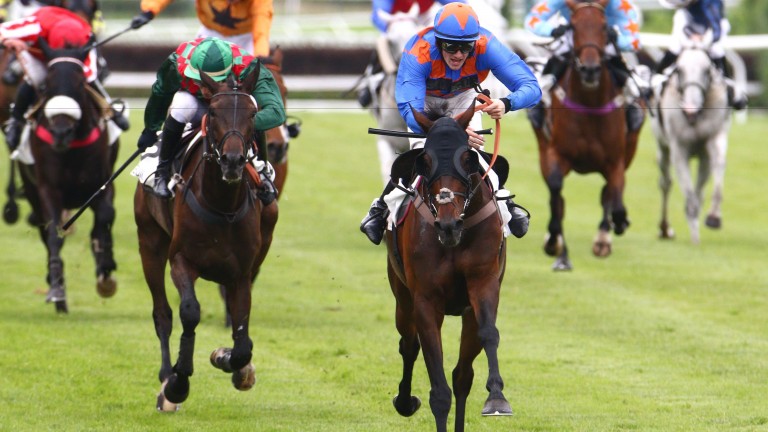 Francois Nicolle is not a man to back down from a challenge and fresh from Alex De Larredya forming part of a Grade 1 double over the two-day meeting at Auteuil last month, the pair arrive at Ascot with a spirit of adventure.

Alex De Larredya had Ptit Zig and Aubusson in behind in the Grand Prix d'Automne and comes into the JLT Long Walk Hurdle in the form of his life.

"He's very well and seems to be very energetic and awake," said Nicolle on Friday, after watching the six-year-old son of Crillon get a feel of the Ascot turf under Daryl Jacob. "The ground is much closer to good than heavy but I don’t see that bothering him. He is slightly better on heavy ground but it won’t be a problem."

The idea of coming to Ascot owes something to the fact that Alex De Larredya is owned by Simon Munir, a man enamoured enough by both Anglo-Irish and French jump racing to maintain a string in all three countries.

Based at Saint-Augustin, north of Bordeaux, Nicolle has trained in excess of 100 winners in each of the last four years, emerging from the shadow of near neighbours Guillaume Macaire and Arnaud Chaille-Chaille.

Nicolle trained Le Curieux to finish 16th in this year's Fred Winter, though with the horse already sold to continue his career in Ireland, that was arguably a less personal venture than with Alex De Larredya.

"It’s great to have a runner and very interesting," he said. "I took a walk around with several of the English trainers and was intrigued by it all. However it all goes at Ascot, I will have more runners in Britain. There is an enthusiasm for the sport here which we don’t have in France and I have been made to feel very welcome. Everything has been done perfectly."

FIRST PUBLISHED 6:00PM, DEC 16 2016
However it all goes at Ascot, I will have more runners in Britain