News MOVING WITH THE TIMES 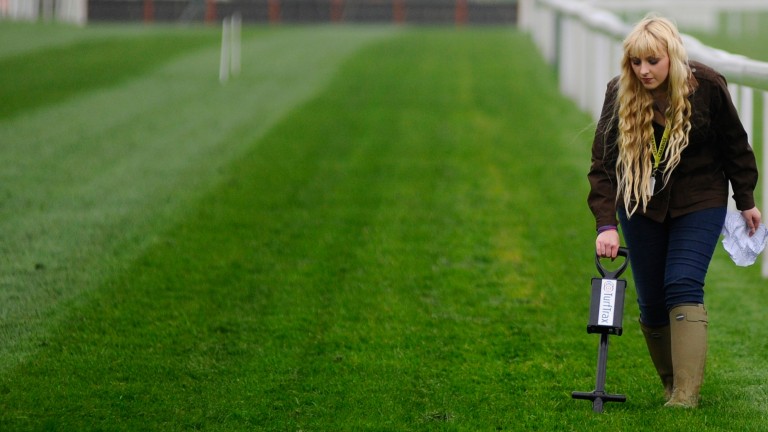 Gowran Park have become the only track in Ireland to use the GoingStick, pictured in operation at Aintree
Getty Images/Alan Crowhurst
1 of 1
By Mark Boylan 7:27PM, AUG 14 2017

Gowran Park has become the first racecourse in Ireland to incorporate the GoingStick, the modern ground assessment gauge commonly used in Britain, but the Turf Club maintains there are no plans to expand the initiative on a nationwide scale.

For the first time in Irish racing, the ground was described as "yielding (7.8 average on GoingStick)" on the official Horse Racing Ireland racing industry Twitter feed, a move that prompted praise from leading figures including trainer Ger Lyons.

"It's a no-brainer," said Lyons. "This will give more definition to going descriptions and I view this as a positive – all of this change is for the best."

Eddie Scally, the general manager of Gowran Park, said: "I'd be very surprised if a lot of tracks don't follow suit, it's the one area where plenty of us get a bit of a kicking on a regular basis.

"We want to give as much information as we can, and I'll make no secret that it will be trial and error early on, but to have something to confirm our opinions and help us make the right decisions can only be positive."

However, Turf Club chief executive Denis Egan erred on the side of caution regarding the initiative, explaining that previous trials had not inspired confidence.

"We trialled them before but the clerks weren't entirely happy, so there's no plan to introduce them at other tracks across the country," Egan said.

"We may review the situation after the results at Gowran but there's nothing in the pipeline at present."

He added: "We had difficulty here before because of the different types of tracks and we just felt it was going to confuse matters. We haven't trialled them for three years. Maybe the newer sticks are better, but we'll monitor what happens at Gowran and review the situation."

Scally has undertaken this measure on the racecourse's behalf, attempting to develop going descriptions through modern methods, but has not had any involvement with the governing body.

"I told them this morning that every report from Gowran will now have the GoingStick reading as well," he said. "It's up to them if they want to use it or not.

"There's been no negative or positive response from the Turf Club. It was discussed a number of months ago but I don't know if anything came of it."

Lyons added: "Often for ground described as good for example, it's not telling us whether it's on the fast or slow side of good – we don't know if we're another shower away from it becoming soft.

"I'd always look at the number when I have runners in Britain – it's a must to give you an idea where you stand."

Scally maintains that the technology can be a comprehensive system to confirm opinions, but admits it is not entirely definitive.

"The biggest fear factor with the GoingStick is that in the UK a number on the reading can be different from one track to another," he said.

"Once we can get to grips with the variances in each track, should others follow suit, it can be an informative system, and for the next 12 months we'll learn as much as we can.

"Before I started I contacted a number of trainers and asked for their opinion and there was no negativity whatsoever. They said, 'Bring it in and we'll learn how it works'."

While Gowran is the first existing track to use the device, Scally pointed out it is not the first in Ireland.

"For the last five years of Phoenix Park the manager, Teddy Tighe, who was generations ahead of himself, used a penetrometer, an old version of what we would call a GoingStick."

FIRST PUBLISHED 7:27PM, AUG 14 2017
I'd always look at the number when I have runners in Britain - it's a must to give you an idea where you stand