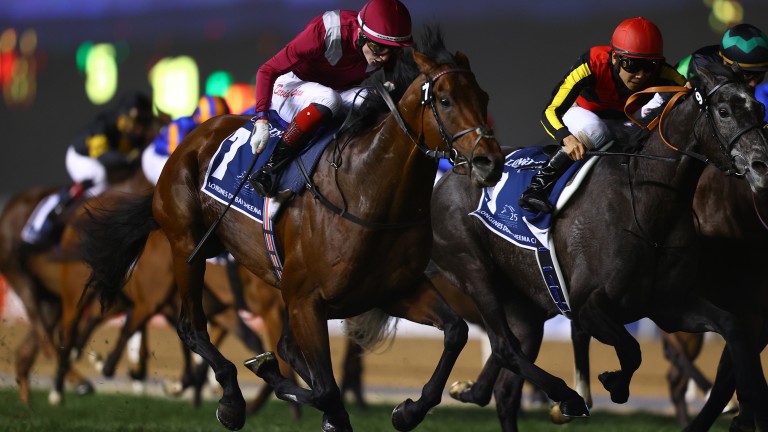 Mishriff cemented his standing as one of the most versatile Group 1 performers on the planet with a seamless transition from dirt to turf, showcasing his rare talent in landing a gripping Longines Dubai Sheema Classic.

The John Gosden-trained four-year-old, who memorably plundered the Saudi Cup at Riyadh last month over 1m1f on dirt, edged out Japanese ace Chrono Genesis in a thrilling finish to provide a first Group 1 victory for jockey David Egan.

"He’s a champion," said the cool-headed 21-year-old, who poignantly offered his condolences to the Maktoum family in the immediate aftermath of this landmark success.

"He's the horse who's going to make my career hopefully. He brought me to that next level by winning the Saudi Cup and this is just the icing on the cake."

He added: "A lot of people were questioning why Mr Gosden and Prince Faisal were running him on the turf over a mile and a half – some said it was the wrong decision not going for the World Cup which he might have been favourite for – but this was the right decision."

The 4-1 victory continued a magic night at Meydan for John and Thady Gosden, who plundered the top-level Dubai Turf with Lord North.

The father-and-son team, also successful in the Lincoln with Haqeeqy, on Friday celebrated their first winner since making their new joint training partnership official.

The pair will now have to contemplate where the remainder of 2021 will take their remarkable globetrotter, open to an array of top-level events on all surfaces and continents.

Paddy Power immediately cut Prince Faisal's pride and joy, who had never previously been tried beyond 1m2½f, to 8-1 (from 10) for the Prix de l'Arc de Triomphe.

The pace didn't appear to be overwhelmingly strong but Egan got last season's Prix du Jockey Club hero relaxed from what had been considered beforehand as an unhelpful draw in stall 10.

Chrono Genesis raced near the centre of the field, but Mishriff's assured pace allowed him to glide into a challenging position approaching the home turn, despite giving away ground by going wide. 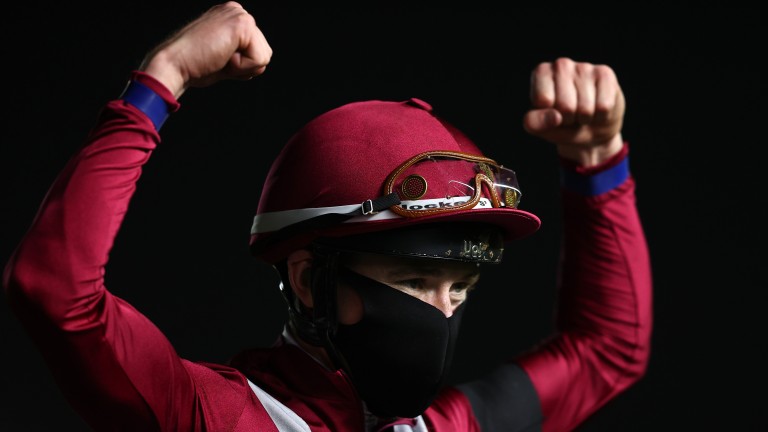 David Egan: has enjoyed the biggest successes of his career aboard Mishriff
Francois Nel

Meanwhile, Ryan Moore lacked daylight on the inner aboard 7-4 favourite Mogul as the business end of the race unfolded and was ultimately unable to engage top gear on the Hong Kong Vase winner's first start of 2021. He was well held in seventh.

The live challenges of the Charlie Appleby-trained Walton Street and front-running US raider Channel Maker began to wane as Oisin Murphy turned up the heat on 25-1 chance Loves Only You.

She surged towards the front and did no favours to fellow Japanese-trained mare Chrono Genesis by leaning left, while Egan gradually began to unwind his mount's gorgeous stride.

The Make Believe colt silenced any doubters about his stamina limitations, toughing it out to win by a neck, while Chrono Genesis (SP 2-1) won the battle for second with Loves Only You, pulling three lengths clear of Walton Street.

"I was just glad I was able to do my job and get him to settle and we know he’s got an immense turn of foot," explained Egan.

"Over 12 furlongs, if he’s ridden with restraint and put in a rhythm, he could be deadly in Europe this year."

Mini jury: Is Lincoln winner Haqeeqy a top-level performer in the making?

In for a big year? Lord North demolishes Dubai Turf opposition under Dettori

'We all adore him' - Williams stalwart Agrapart returns to winning ways

FIRST PUBLISHED 4:24PM, MAR 27 2021
Over 12 furlongs, if he’s ridden with restraint and put in a rhythm, he could be deadly in Europe this year

Mishriff ruled out of a crack at the Breeders' Cup in favour of Saudi Cup trip Fury and frustration but also an abundance of smiles on a vintage Champions Day Next up: key quotes as Mishriff and Adayar head a stunning Champion Stakes Adayar v Mishriff: Graeme Rodway crunches the numbers to reveal who is fastest 'The best year since Frankel' and 'off the charts' - epic Champions Day awaits Who will win the 2021 Champion Stakes based on past trends?