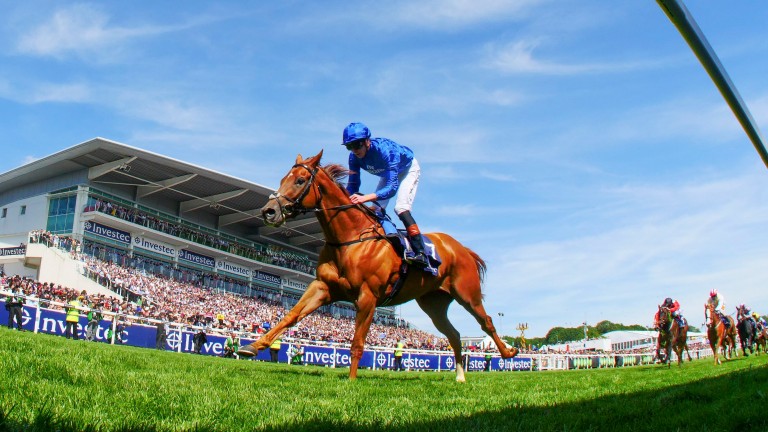 Last year's winner Usherette has not been in the winner's enclosure since that victory, but she represents a trainer, Andre Fabre, who does not miss often with the horses he decides to travel over from France.

A third in the Prix d'Ispahan last time served notice that Usherette is returning to form, and Fabre said: "She acts on good ground and she has been tenderly prepared for this because she was off for a long time.

"I've been quite happy with her last two races and I think she should be close in what looks an open race."

The global appeal of Royal Ascot is on display for this race, but the betting suggests the prize will be staying at home with Laugh Aloud.

As John Gosden's filly passed the line five lengths in front at Epsom last time in the Princess Elizabeth, bookmakers were scribbling down short odds for her chances of a Royal success and Gosden has been happy with her since that win.

He said: "Laugh Aloud has had this on her agenda for a long time and won nicely at both Goodwood and Epsom. She's pleased at home since and the ground and track should play to her strengths."

Racegoers at Lingfield were treated to a Ryan Moore special in the Chartwell Stakes when he plotted his own course en route to a Group 3 victory aboard Mix And Mingle.

Although Moore is not aboard this time, trainer Chris Wall is hopeful William Buick can work his magic instead.

"She's a not difficult filly to ride and hopefully William can provide a similar bit of inspiration," Wall said.

Mix And Mingle is yet to win at a mile, and Wall added: "We ran her over a mile on a few occasions last year and a couple of times she gave the impression she didn't quite get home. Whether that was because, like a lot of stables last year the health of our horses wasn't at the very best, or whether it was a genuine lack of stamina we'll see. If she does stay the mile then I think she'll be very competitive."

How will the South African contingent fare?

There is plenty of interest for South African racing fans, with Smart Call a fascinating contender for Sir Michael Stoute, while one of the country's leading jockeys, Gavin Lerena also rides in the race.

Formerly with Alec Laird, multiple Grade 1 winner Smart Call was being lined up for the Sun Chariot last season at Newmarket before meeting with a setback. She instead made her British debut at York in the Middleton Stakes, finishing a creditable third of four.

Gavin Lerena has swapped South Africa for a stint riding in Britain this summer, and he partners another import, Same Jurisdiction for Ed Dunlop. Like Smart Call, the mare is a Grade 1 winner in South Africa, and showed her best form in three starts for Dunlop last time out when second in a conditions race at Leicester.

Completing the trio of South African interests is Greta G, who runs in the colours of Drakenstein Stud Proprietary Limited, the owners of Same Jurisdiction.

She has joined John Gosden, having been in Argentina, and Gosden said: "She has to run in a weight for age race and there aren't that many options for her."

Furia Cruzada has probably earned herself a nice discount at duty free given how many air miles she has racked up, as she starts out for another new yard on Wednesday.

The Chilean-bred mare began racing in her native country before moving to Argentina. Next were decidedly cooler climates as she swapped South America for Newmarket and the yard of John Gosden.

Her best run for Gosden came in this race 12 months ago when second to Usherette, and she then went from Gosden to Erwan Charpy in Dubai. Now the five-year-old finds herself with Satoshi Kobayashi, who trains in France.

Kobayashi said: "She was second in this race on softer ground last year. It remains to be seen if she is as effective on good to firm. I see her as a mare that will be most effective over 2,000 metres [a mile and a quarter] but this is a stiff track."

Francois Doumen, trainer of Aim To Please
PJ McDonald takes over in the saddle as he is the new owner’s jockey. I don’t feel that being drawn 15 is ideal but I can console myself that she is near Usherette and some other good fillies. She worked well on the Reservoirs last Thursday and Ascot shouldn’t present the same problems as the Dip at Newmarket. This is a high class race but she is a very consistent.

Mick Channon, trainer of Opal Tiara and Summer Icon
I'm very pleased with Opal Tiara, her form's solid and and she'll love the ground. Summer Icon's a big price and the owners are hoping for a good run.

Roger Varian, trainer of Dawn Of Hope
Dawn Of Hope is two from three here and the track clearly suits her. Things didn’t fall her way at Sandown, but her reappearance third under a penalty at Doncaster was a solid effort, and this race has always been the plan.

Jean-Claude Rouget, trainer of Qemah
This race is a test to see if she can recapture the form of last year. She seems well in training and we will see tomorrow. The forecast is for it to be very warm, which isn’t always good for a horse who can be a little nervous like her.

FIRST PUBLISHED 6:00PM, JUN 20 2017
I've been quite happy with her last two races and I think she should be close in what looks an open race

Watch: Royal Ascot preview show featuring Tom Segal and Paul Kealy Can Battaash make it six out of six first time out? Graeme Rodway gives his view Paul Kealy's banker for day one of Royal Ascot Welcome to the week that transports you to places you never thought you could go Dominant duo Moore and Dettori set to extend stranglehold on riding honours Can one-of-a-kind Jim Bolger pull off more Group 1 heroics with Poetic Flare?