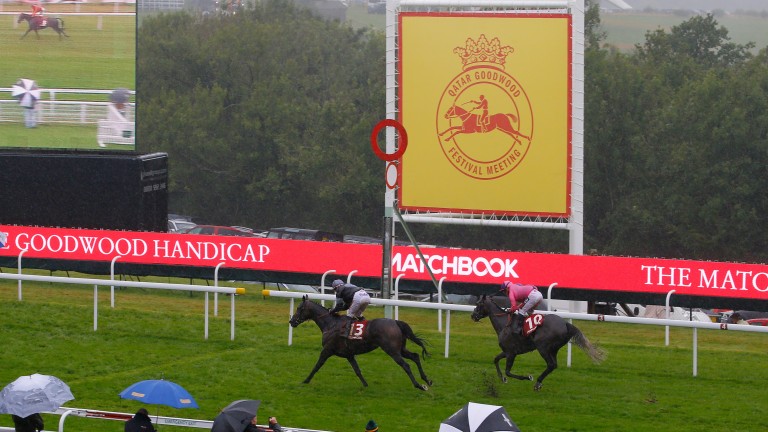 Josephine Gordon will not forget her first Glorious Goodwood winner in a hurry, for the marathon Matchbook Betting Exchange Goodwood Stakes which she won on 25-1 chance Cool Sky was run in conditions so atrocious they must have been almost unprecedented at the meeting.

In as much as they suited any horse, they suited the Ian Williams-trained dual-purpose eight-year-old, who Gordon brought with a long run up the outer to win going away by a length and a quarter from Aurora Gray.

Gordon said: "It's very exciting to get a winner in my first year at Glorious Goodwood. I was a bit concerned five out but in the end he's won quite comfortably. It's the weather for jumping boys – and quite hard work – but I was lucky to be three wide and so I missed most of the kickback."

Williams added: "I very nearly took him out as it was so soft, but I thought at least they'll go through it. Josephine's given him an incredible ride. I had a gut feeling about this. I don't know why really but he reminded me a bit of Teak, who actually won this on fast ground."

Mark Johnston's horses have a reputation for enjoying fast ground, but Londinium confirmed himself an exception when providing the stable with a first winner of the week in the Better Odds With Matchbook Betting Exchange Handicap.

Johnston said: "Joe [Fanning] said he was always travelling very well and was absolutely cantering at the top of the hill, when he was torn between tactics but decided to kick for home.

"He doesn't normally do well away from home, but he's in again on Friday and so might get used to Goodwood."

Johnston completed a double when Exceed And Excel newcomer Threading bolted up in the fillies' maiden, coming home six lengths clear of Newbury runner-up Your Choice in the hands of William Buick, who had suffered Sussex Stakes frustration on Ribchester 35 minutes earlier.

Exceed And Excel's progeny tend to be regarded as best on fast ground, but Johnston said: "I'm a great believer that you can't pigeonhole them after ten runs, never mind before they've run.

"You'd guess from her pedigree she'd be better on a sound surface, but we won't get too carried away. The ground may have inconvenienced the others more than her."

Hollie pick of the Doyles

In a battle of the Doyles it was Hollie who came out on top in the 1m2f fillies' handicap, with the 3lb claimer getting the better of more established namesake James aboard the Richard Hannon-trained Billesdon Bess.

She led from the gate and lured Titi Makfi into challenging her early in the straight before pulling out more to win going away under a lovely teasing ride for a career first win at the meeting.

Hannon said: "She's improving and Hollie gave her a lovely ride –she made all and gets on well with her. She did it the hard way and is versatile on the ground.

"There's improvement to come and I'm pleased for the owners, who are lovely people."

"Thankfully days like this don't happen here too often. I tell people that if you're going to bring somebody from abroad to see British racing you should bring them to Goodwood, because on a nice day it's probably the best spectator track in the world. On a bad day, though, it nearly goes to the opposite extreme, for it's really not geared up for terrible weather"
Goodwood's number one fan Mark Johnston

Finish of the day

Arab races get a bad rep and on a rain-soaked day few wanted one sandwiched between the sixth and seventh races, but it produced the finish of the day when Olivier Peslier got back up on Tayf to deny Derby-winning rider Alan Munro on Ebraz by a nose.

Thought of the day

Another day of Glorious Goodwood, another bloodbath for punters. No successful favourites and winners at 25-1, 20-1,
12-1 and 9-1. At least it will be good for the levy!