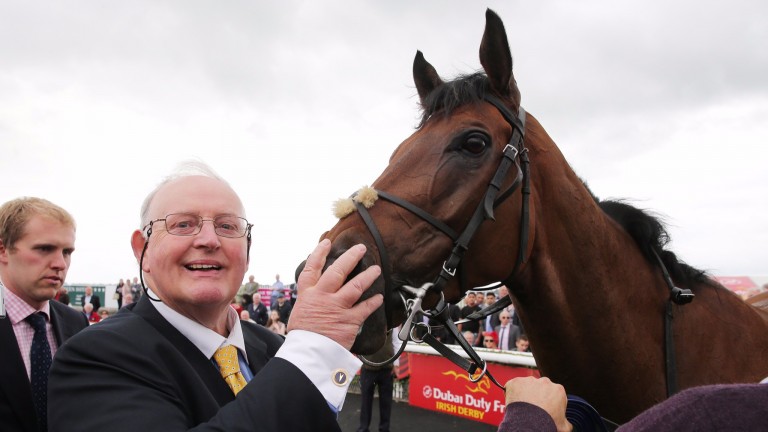 Gordon Lord Byron: races in Qatar for the first time in his career
Caroline Norris (racingpost.com/photos)
1 of 1
By Stuart Riley in Doha UPDATED 5:29PM, FEB 23 2018

Connections of Gordon Lord Byron probably thought his days of doing something for the first time were behind him.

He is ten years old and has raced 83 times – in six different countries. 46 races in Ireland, 19 in Britain, seven in France, five in Hong Kong, four in Dubai and two in Australia have yielded 16 victories. On Friday, for possibly the final first time, he adds Qatar to the list.

And his trainer Tom Hogan, who has been on the incredible journey with him, believes he can make it win number 17.

The three-time Group 1 winner is not quite the force he was in his heyday, when trophies such as the Prix de la Foret, Sprint Cup and George Ryder were on his mantelpiece, but the Dr Cyrus Poonawalla and Morgan Cahalan-owned frequent flyer is still good enough to be top-rated in this $200,000 [£144,016] contest over a mile.

"He's in real good form, he's come here well," said Hogan. "He loves the sun on his back and we hope he'll run a decent race. He loves everything about travelling, he loves getting on planes, we've sharpened him up and it's proper good to firm ground which would be very suitable for him.

"He has a proper chance, he's the highest-rated horse in the race and he's in good form. Billy Lee, who rides him, spent a few months out here and has experience on the track so hopefully we'll get a bit of luck in running."

Gordon Lord Byron is drawn in the middle of the field in stall seven of 14, while further British and Irish involvement comes in the form of Harry Bentley, who rides Black Granite, Martin Harley on Pleaseletmewin and Oisin Murphy, who partners Sir Guy Porteous.