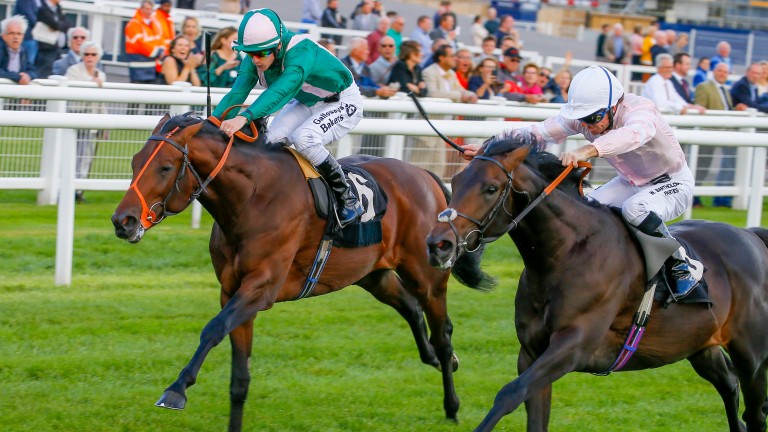 Raheen House, who had his form franked when Shutter Speed and Enable – the fillies he divided at Newbury last month – won Classic trials recently, will go for the EBF Stallions Cocked Hat Stakes at Goodwood next Friday and his trainer reckons a top-level triumph is within range this season.

Always held in high regard by trainer Brian Meehan, Raheen House won his maiden at York before finishing fourth in the Racing Post Trophy last year.

The son of Sea The Stars was second to subsequent Musidora winner Shutter Speed at Newbury on his first outing of 2017, with Enable, who landed this month's Cheshire Oaks, third.

"He's in great form and I thought it was a very good run at Newbury. The fillies in front and behind have both won Oaks trials since and he's bang on for the Cocked Hat at Goodwood next week," Meehan said on Thursday.

"He's in great shape and worked very well this morning. He was fourth in a Group 1 at two and I think he can win one as a three-year-old. We'll see how we go at Goodwood, then take him to Royal Ascot for the King Edward VII and let it develop from there."

A trip to West Sussex is also on the agenda for last year's Cambridgeshire winner Spark Plug, who was third in the Earl of Sefton last time and runs in the Listed Goodwood Festival Stakes on Saturday week.

"He's also in tremendous form and ran well in the Earl of Sefton," Meehan added. "We'll see how he goes and if he can step up."

Spark Plug could also head to Ascot after Goodwood, but Windfast goes straight to the royal meeting.

The Abernant Stakes third is 40-1 for the Diamond Jubilee Stakes and Meehan said: "He ran very well at the Craven meeting but is a difficult horse to keep right, so I don't want to waste any runs with him. He's in great shape and will go straight there. He'd be a big price but he'd have a big each-way chance."