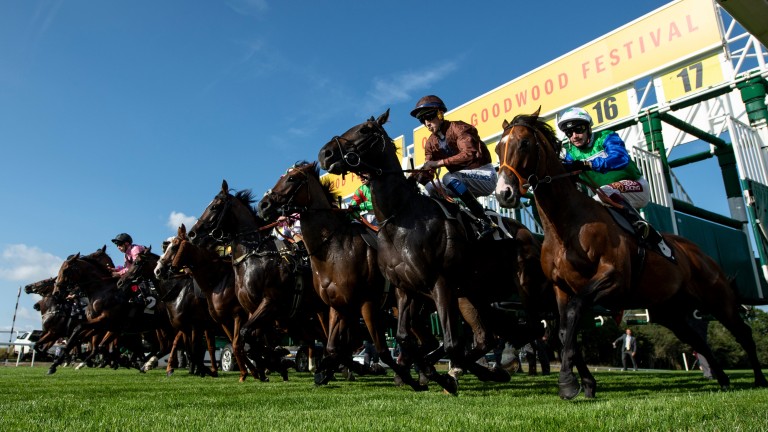 Officials at Goodwood have promised to do everything possible to ensure racing runs to time for the rest of the five-day festival after a series of hold-ups on Thursday led to races clashing with Galway, prompting a wave of criticism on social media.

Only the first race went off on time with the other six races on the card delayed by up to 14 minutes following a succession of incidents during racing.

The Richmond Stakes was delayed when Volatile Analyst needed to be reshod and the same scenario happened before the Nassau Stakes when Maqsad required the attention of the farrier.

However, the biggest contributor to the schedule running late was London Calling arriving at the start for the 7f nursery still wearing a hood, which he was scheduled to wear in the paddock with the permission of the stewards in the knowledge that it had to be removed before leaving the parade ring. London Calling was subsequently withdrawn and trainer Richard Spencer fined £140.

Clerk of the course Ed Arkell said attempts had been made to make up time, but it had proved difficult. He added: “There were three or four incidents which compounded the original situation, which was unfortunate.

“Obviously we’re very concerned with making sure races run to time and will be making every effort to ensure they do for the rest of the meeting.”

FIRST PUBLISHED 7:04PM, AUG 1 2019
There were three or four incidents which compounded the original situation, which was unfortunate

Confirmed runners and riders for Tuesday's Goodwood Cup Glorious Goodwood 2021: essential information for the Flat racing showpiece Poetic Flare odds-on for Sussex as Glorious Goodwood day two fields take shape 'We couldn't be happier' - Battaash in prime shape for Glorious Goodwood What the relaxation of Covid-19 restrictions will mean for racing and crowds