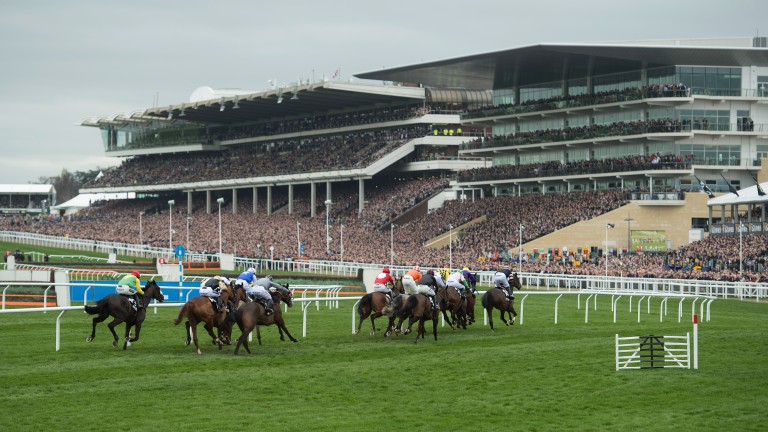 Cheltenham: conditions continued to dry out at the track
Edward Whitaker (racingpost.com/photos)
1 of 1
By Andrew Dietz 11:43AM, MAR 15 2017

The ground for day two of the Cheltenham Festival has been changed to good to soft, good in places (from good to soft) as conditions continued to dry out at Prestbury Park.

There was a suggestion that change might have been made during the day on Tuesday but with jockeys reporting the ground to be "dead", "on the slow side of good" and "hard work" it was left alone.

However, following another dry night clerk of the course Simon Claisse has changed the official description.

"We were delighted with yesterday and the ground has taken it very well," he said on Wednesday morning. "We've had a pretty heavy dew, which will keep the moisture in the ground, but I've just sped it up a little bit on the chase and hurdle courses."

Jockey-turned-TV presenter Mick Fitzgerald has already been out on the track and he said: "It is definitely a fraction quicker than yesterday.

"But there is still plenty of moisture and it is perfect jumping ground."

The Champion Chase card, due to start with the Neptune Novices' Hurdle at 1.30, also features the Glenfarclas Chase on the cross-country course, which has also been changed.

"The cross-country course has dried out a bit to good, good to soft in places [from good to soft, good in places]," added Claisse.

The going on the New course, used on Thursday and Friday, was on Wednesday morning changed to good, good to soft in places (from good to soft, good in places).

The bookmakers shaded it on day one and punters hoping to hit back are expecting another excellent afternoon for Gordon Elliott following the trainer's treble on Tuesday.

Tombstone, who was considered for the Champion Hurdle, has been backed into 4-1 (from 5) at the head of the Coral Cup market and stablemate Shattered Love is into 10-1 (from 14) for the opening Neptune Novices' Hurdle.

Fred Winter favourite Divin Bere has hardened to 9-2 (from 11-2), while Bless The Wings, 12-1 (from 16), has been the subject of each-way support for the Glenfarclas Chase.

There have been some major plunges on horses in the Weatherbys Champion Bumper down the years and the early mover is Cause Toujours 13-2 (from 8).

With Willy Twiston-Davies in hospital with a back injury following a fall on Tuesday, Jamie Bargary takes over on his sole ride Robinshill (2.20), while in the same race Carrig Cathal was the only non-runner on the card at 11am.