Gone but never to be forgotten, Swinburn was a gentle genius 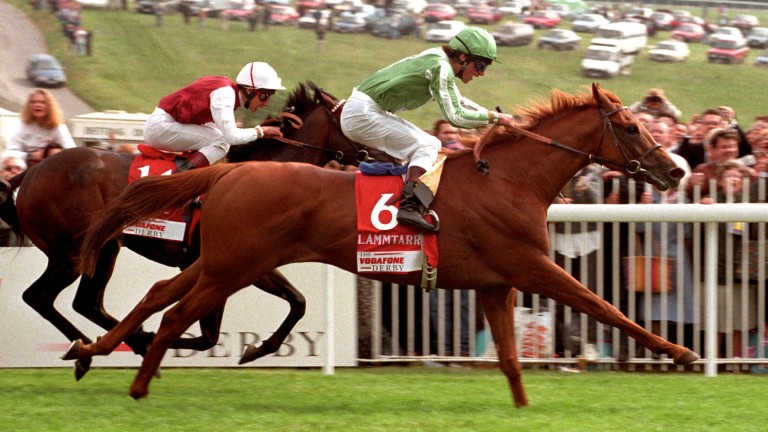 How cruel and how shocking it still feels that Walter Swinburn is dead at 55. To those of us who have lost our racing hero the sadness is intense. To his loved ones the pain will be unbearable.

In a typically beautiful piece on Thursday, Steve Dennis perfectly summed up why the news on Monday evening struck so hard. In our heads and hearts Walter remained the Choirboy. He was, as Steve so eloquently observed, forever young.

Growing up as an avid racing fan my two idols were Peter O'Sullevan and Swinburn. O'Sullevan commentaries were recorded on a cassette, while pictures of Walter in action aboard those many Michael Stoute-trained stars, plus a select few from outside stables, were cut out of The Sporting Life and Racing Post before being pasted carefully into a scrapbook.

It may be that no victory meant more to him than that of Lammtarra in the 1995 Derby. His winning ride highlighted quite spectacularly his understanding of both a raw, inexperienced colt and a uniquely demanding track. Such was the sublime artistry of that performance, and its tragic background given the murder of Alex Scott, there was an enormous sense of injustice to Swinburn losing the mount on Lammtarra in the King George and Arc. It upset his fans and it upset him.

A privilege of working as a journalist covering a sport you adore is the chance to meet your heroes. Neither O'Sullevan nor Swinburn disappointed. Those in the press room who knew Walter far better than I have in recent days written with insight, admiration and affection. Aside from commenting on his genius as a jockey, they have noted his private, sensitive and complex nature. In any dealings I had with him I additionally found him to be kind and helpful but also somewhat fragile. Given what he had gone through it is easy to understand why.

There were many difficult periods in Walter's life, some of them played out publicly, some of them not. To his credit, he was not afraid to speak of his demons, including once in a fascinating 2004 interview with The Guardian's remarkable interviewer Donald McRae.

Walter battled alcoholism and bulimia. He told McRae how from 1986 onwards one had led to the other. It remains a harrowing piece to read but all jockeys who in order to make weight subject themselves to self-induced vomiting, known as flipping, should read every word.

"Eating, for me, was not very pretty," admitted Swinburn, who used the term "bolting" to describe his own flipping method.

"I had it down to a fine art," he said. "The whole idea is that you drank fizzy drinks when you bolted. I knew how to get it back up within minutes. The more dehydrated you were the easier it was to get it up.

"When my good friend Steve Cauthen and Cash Asmussen first came to England from America we'd never seen anything like it. A lot of us young jockeys were . . . 'awe' is not the right word. Let's just say we were very impressionable. We saw that this was their technique to keep the weight down. They looked happy on the outside and they were riding lots of winners. So I copied Steve. That first year, 1986, was great and I won my second Derby. I felt strangely good."

Having related how a "light and floaty feeling" soon turned into a pitiless craving, Swinburn said: "It's nothing like an ordinary hunger pang. My God, when it comes it feels as if you have to eat there and then. You have to get something in you and spew it straight out. It quietens the head down – for a while.

"I was secretive. I was ashamed. And so the drinking started. Alcohol made me feel better about myself."

Earlier in the year we reported a worrying rise in the practice among southern-based apprentices, while an active flipping rider said: “I’ve spoken to doctors and nutritionists and am certain in my own mind it isn’t healthy. It can’t be healthy. It has been very common with the elite jockeys but nobody has ever taken notice of it. Now a few people are pointing it out and it’s a big problem."

It is indeed a big problem, certainly for those who do it. Some will flip without suffering any physical or mental scars. Others will not.

"You can see from their faces which of the lads in the weighing room are flipping, particularly the young lads," he said. "It can't be good for them and it becomes very addictive. I have friends who flip and I've spoken to them about it. They don't want to flip but they can't stop themselves now because it's gone that far and they need to do it."

Racing has long needed to do more to properly tackle the issue. Now, thankfully, there is progress. The Professional Jockeys Association, the Jockeys Employment and Training Scheme and the BHA are all hammering home the message that good nutrition is so important to riders as athletes. Increasingly, those organisations are also stressing the dangers of flipping and poor weight management.

That debate needs to extend to the sport, particularly its medical experts, asking how can it possibly be wise, safe or responsible for racecourse weighing rooms to house saunas, in which jockeys dehydrate themselves –a practice full of negative side effects – a matter of minutes before riding thoroughbreds at 40 miles per hour. There will be many riders who would rather the question is not asked, but asked it must be.

Waging a war on his own body took a toll on Walter Swinburn. For the most naturally gifted jockey of his generation there are no more fights left to fight. All too soon he is gone but the memories he leaves behind will endure.

So many of those memories were crafted on horses prepared by the trainer he referred to as "the boss". It is a measure of their success together that although Stoute has gone on to forge tremendous associations with other jockeys, most notably Kieren Fallon and Ryan Moore, he will always be most closely linked with the man who steered Shergar, Shahrastani and Zilzal through that golden eighties decade.

Unlike Fallon and Moore, the Choirboy never became champion jockey, but certainly not through lack of talent. He was one of the best there ever has been or ever will be.

We have lost him all too soon, but when he was here, when his star soared high and we marvelled at how a human could be so at one with a horse, the great and gentle W R Swinburn was a rare and wonderful joy to behold.

Gratitide goes with the goodbye as Channel 4 Racing ends

As this is the last Monday column of the year it is the final opportunity on this page to mark the end of Channel 4 Racing.

It is difficult to conceive of the sport without Channel 4 in it, but with the concluding Saturday broadcast now completed and just two more afternoon programmes and one edition of The Morning Line left to be screened, the end is in sight.

Putting together Sunday's Big Read, tracing the 32 years of Channel 4 Racing, was akin to an evocative meander down memory lane.

We all have a long history together, back to when Raleigh Gilbert handed over to Graham Goode in the grandstand, John Oaksey regularly broke into fits of laughter at things said by John Francome, Tommo linked to the picture puzzle and Big Mac came out of a commercial break with the words: "It's great to have you back with us." The word "you" would always be emphasised.

To all of them, to those in front of the camera and those whose faces viewers never see, I am hugely grateful, because since 1984 Channel 4 Racing has provided a connection to the sport we love, bringing us special days with heroes such as Desert Orchid, Kauto Star and Frankel. Many of us found saying goodbye to racing on the BBC a wrench. Now, four years on, this is, too.

Those responsible for Channel 4 Racing have given to the programme, and to those who have watched, their enthusiasm, dedication and a vast amount of hard work. Without them, racing would have been much the poorer.

FIRST PUBLISHED 12:20PM, FEB 10 2017
Stoute went on to forge tremendous associations with Fallon and Moore, but he will always be most closely linked with the man who steered Shergar, Shahrastani and Zilzal

Leading Oaks fancies Teona and Noon Star set for Musidora clash at York Can anyone stop Aidan O'Brien's recent domination of the Dee Stakes? Can Queen Power make it a magnificent seven for super Stoute? Chester clues in abundance on a busy morning on both sides of town