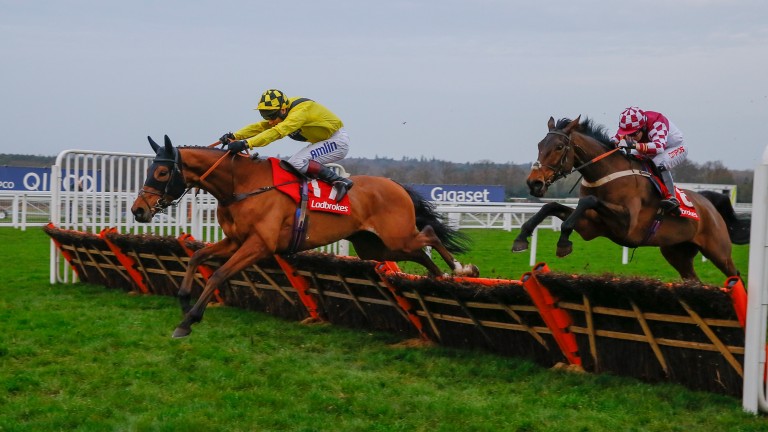 Sternrubin leads Jolly's Cracked It over the last 12 months ago before the pair dead-heated
Mark Cranham
1 of 1
By Graham Dench 3:01PM, DEC 17 2016

Feather-weighted Golden Spear leads a three-pronged challenge from Tony Martin for an ultra competitive handicap that features no fewer than three previous winners of the race.

Flat and jumps, Martin has regularly plundered our biggest handicaps since She's Our Mare took the 1999 Cambridgeshire, and he has frequently left the bookies squealing.

Golden Spear, a 16-1 chance when today's race was first priced up, has plenty going for him as an unexposed last-time-out hurdles winner carrying just 9st 12lb with his jockey's allowance.

That last win was admittedly 454 days ago, but nobody should doubt his well being as last time out he took the valuable Tote November Handicap on the Flat at Leopardstown with a performance which suggests he is potentially very well in here.

Stable mates Quick Jack, a former Galway Hurdle winner, and Pyromaniac, who was in the headlines before the latest running of that race, provide strong back up to Golden Spear, and the trio are joined by another respected Irish challenger in Noel Meade's recent Fairyhouse winner Waxies Dargle.

Last year's dead-heaters Jolly's Cracked It and Sternrubin meet again, with the former, who has not raced since, now 4lb better off.

Willow's Saviour is the line-up's third former winner. He gave Dan Skelton a major prize early in his first season three years ago.

Nicky Henderson won three of the first six runnings of the former Ladbroke Hurdle but has not been successful since 2008. Like Tony Martin, he is three-handed, with Brain Power, Consul De Thaix and Hargam.

This nearly always goes to an improver and five of the last ten winners won last time out. None had finished outside the first three.

Nicky Henderson, trainer of Hargam, Brain Power and Consul De Thaix
Hargam is doing well in his work and will love the ground but it will be difficult to give weight all round. Brain Power went up 7lb for his Sandown victory so is 4lb worse off at the weights with Consul De Thaix which obviously makes his task a little harder, but he's still a very progressive animal who has lots of talent. Consul De Thaix has improved plenty for Sandown. I'm not sure how many maidens have won this but he's in good form and his last run would suggest he'd be bang there. I'm looking forward to him and I hope Barry Geraghty has made the wrong decision to partner Modus! He would be my pick of the three if you had to nail me down.

All three are in good order. Pyromaniac and Quick Jack haven't run over hurdles since the Galway Hurdle in July when they both ran well despite not having the clearest of runs. We're claiming 7lb off Quick Jack as he has plenty of weight. Golden Spear is the least experienced of the three over hurdles and hasn't run over hurdles since winning at the Listowel festival last year, but he won nicely on the Flat last time and has his chance off bottom weight. The better the ground, the more it will suit all three.

Alan King, trainer of Who Dares Wins
My 2011 winner Raya Star had just 10st 1lb and Who Dares Wins has to carry 11st 11lb, but he is a decent horse who won the Gerry Feilden in style. He has gone up 9lb since Newbury so will need a career-best performance to win, but he deserves his chance and is likely to get the fast-run two miles he needs.

Harry Fry, trainer of Jolly's Cracked It
He's been off since dead heating a year ago and it's a very competitive race for his first run of the season. However, he's as well as we could have him at home, he's got a very good record at Ascot, and he goes well fresh.

Paul Nicholls, trainer of Modus and Diego Du Charmil
Modus ran really well in the Greatwood at Cheltenham, and was only beaten half a length. The ground will be ideal for him. I ran Diego Du Charmil too soon after his win at Chepstow. He’s well, but this is a tough race for four-year-olds.

Oliver Sherwood, trainer of Rayvin Black
He would love it softer and is a bit of a law unto himself, but he's going chasing soon and I couldn't find anything else suitable.

Philip Hobbs, trainer of Sternrubin
Good to soft is probably ideal and the track suits him very well. He's only 2lb higher than when he won there on his reappearance and should have a decent each-way chance.

Dan Skelton, trainer of Meet The Legend and Willow's Saviour
Meet The Legend has been laid out for this and I'm really happy with him. He's got a chance in a really competitive race. Willow's Saviour has more on than when he won this race three years ago, but Bridget Andrews takes 3lb off and I think he'll run nicely. He'll probably stay hurdling this time.

Stuart Edmunds, trainer of Wolf Of Windlesham
He's none the worse for his fall at Cheltenham and we were very pleased with his run on the Flat the other day. He won off this mark as a juvenile.

Seamus Mullins, trainer of Fergall and Chesterfield
Fergall is very consistent in this grade and is off the same mark as when a close fourth here last time. It's a big shout for Chesterfield coming off a long lay off, but he had the form before he suffered a tendon injury with John Ferguson and is working and schooling well.