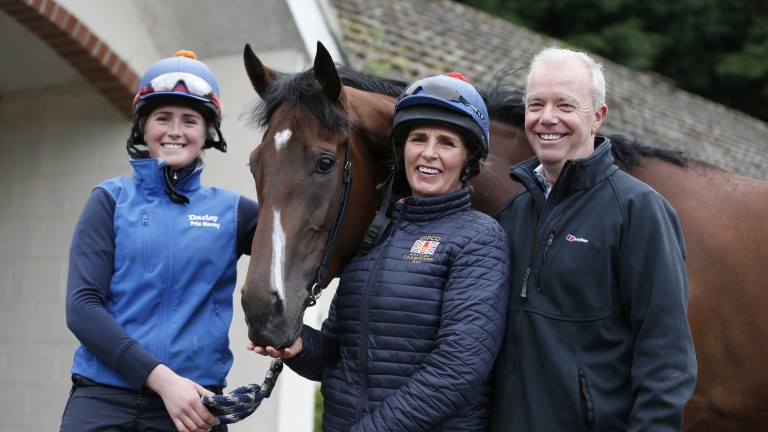 She is the filly that money cannot buy, despite the best attempts of the deep-pocketed ones amongst us, with Laurens labelled ‘priceless’ by doting owners John and Jess Dance.

That intangible value is an understandable one given the four-year-old filly with the distinctive off-centre white streak has provided immeasurable joy for those closest to her over the past couple of years.

Already a five-time Group 1 winner, including the Prix de Diane, Laurens sets out on what connections hope will be another dream season with the increasingly popular filly.

“I’m definitely excited to see her back on the track,” John Dance said. “I’ve said that it’s felt like a particularly long winter to the extent that I’ve bought a couple of jumps horses so that next winter feels a bit shorter than this one!

“We’ve had such huge support for her from the general public with kind messages from people and also from all sections of the media. We feel a certain amount of responsibility with her as a result to justify that support and that’s why her Sun Chariot win last year was my favourite race because she came back and delivered at home when expected to.”

Laurens has landed each of her top-level successes against her own sex and was heavily defeated the only time she took on the males in the QEII Stakes at Ascot on Qipco Champions Day last year, albeit that came at the end of a long season.

“She was over the top by Ascot,” Dance adds. “I’m fairly relaxed about the Lockinge as it’s her first run of the season against match-fit rivals and what will be will be. People are saying it’s an open race and there is no standout, but there are a lot of quality horses she’s taking on.”

Having been the dominant force with his three-year-olds so far this season, trainer Aidan O’Brien is in town again with two leading older horses.

Le Brivido heads O’Brien's bid for a third win in the Lockinge, which he captured with Hawk Wing in 2003 and Rhododendron 12 months ago, while I Can Fly is a highly talented second string for the yard.

Winner of the Jersey Stakes for Andre Fabre in 2017, Le Brivido was third in the Gladness Stakes at Naas last month on his first start from Ballydoyle, and O'Brien said: "Le Brivido seems in good form. We were pleased with his run at Naas and we've been happy with him since." 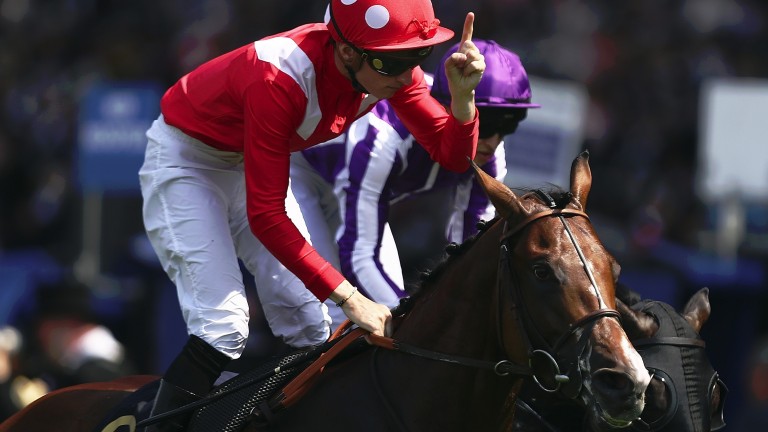 Ryan Moore, successful in the race for the first time last year, rides Le Brivido while Wayne Lordan partners I Can Fly, who ran Roaring Lion to a neck in the Queen Elizabeth II Stakes last season.

"I Can Fly was a bit disappointing in the Dubai Turf at Meydan last time but she was slowly away and we're hoping she'll leave that effort behind her," O'Brien added.

Once again Beat The Bank has moved serenely through the lesser Group-race foothills and stands just below the Group 1 peak he has tried to conquer before without success.

Beat The Bank has won six times from seven starts in Listed, Group 3 and Group 2 contests for Andrew Balding and King Power Racing, yet he has had six attempts at Group 1 level and come up short every try.

The five-year-old landed the Group 2 Sandown Mile last time out and Balding believes he is arriving at Newbury with a horse at the top of his game.

"He hasn't scored at Group 1 level but I think he’s as good as at any time since he has been with us," the trainer said. "Conditions should be ideal and I would hope he'll run well. At least he has had a run, so his fitness won't be a concern.

"He’s drawn in stall one and there doesn't look to be a huge amount of pace but he’s fairly versatile. We have huge respect for Laurens, and she'll be tough to beat if anywhere near her best, but our horse is in a good place."

Neither Lord Glitters or Without Parole were able to stop Japanese superstar filly Almond Eye in the Dubai Turf when they were last seen in action in March.

That said, Lord Glitters perhaps gave Almond Eye more to think about than expected, travelling up smoothly on the bridle before eventually claiming a creditable third behind the winner and fellow Japanese runner Vivlos.

"It was a fantastic run in Dubai last time," trainer David O’Meara said. "Almond Eye was brilliant and Vivlos is very good around there. He was conceding 5lb to them, being fillies, and we were very pleased with him.

"We’ve had the Lockinge in mind since and his work has been good. He’s maybe slightly better on slow ground but he’s versatile and it was quick in Dubai. Neither the track or big field should be a problem for him." 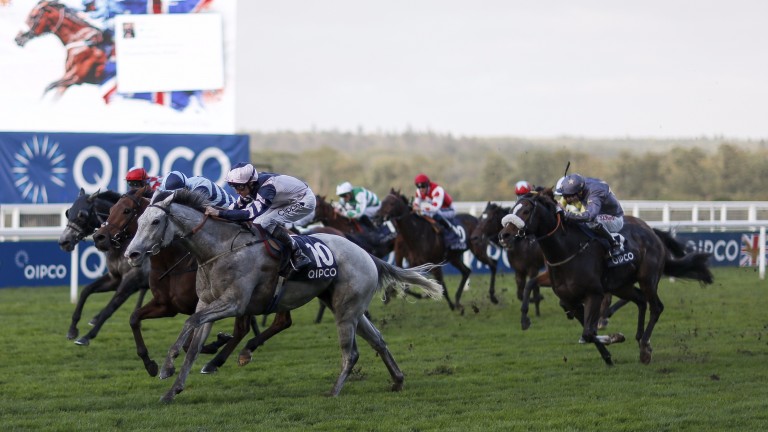 O’Meara, who trains the grey for owners Geoff and Sandra Turnbull, added: "You need a little luck on your side and things to go right in the Group 1 races. I think he’s capable of winning one somewhere along the way and hopefully it will be at Newbury on Saturday."

Without Parole was four and a half lengths behind Lord Glitters in sixth, and his trainer John Gosden swaps cheekpieces for blinkers.

Gosden said: "He ran well behind the brilliant Japanese mare Almond Eye in Dubai and came out of that in great shape. This straight mile should suit him well with the option of stepping him back up in trip later on."

Without Parole
Pro Blinkers go on, a trick the trainer used well with another son of Frankel in Cracksman
Con Struggled since winning at Royal Ascot last year

Eve Johnson Houghton, trainer of Accidental Agent
He’s going to need it. He’s in really good form, and he'll run a good race, but he'll come on for the run. He had a couple of chips in his front ankle, which he probably got before he went to Deauville, but they never showed up at the time. He wouldn't let himself down properly because of them, but we've taken them out and he's now fine. In fact he’s moving as sweetly as I've ever known him to move.

Sir Michael Stoute, trainer of Mustashry
He gave the 5lb away at Newmarket last time and a model of consistency. It’s a very tight race but I think he’s in great shape. The Newmarket run intimated that he’s as good as ever this year, so we go there hopeful. It’s a tough race, a little bit of luck in running here or there will make all the difference as a lot of them are rated very similarly. 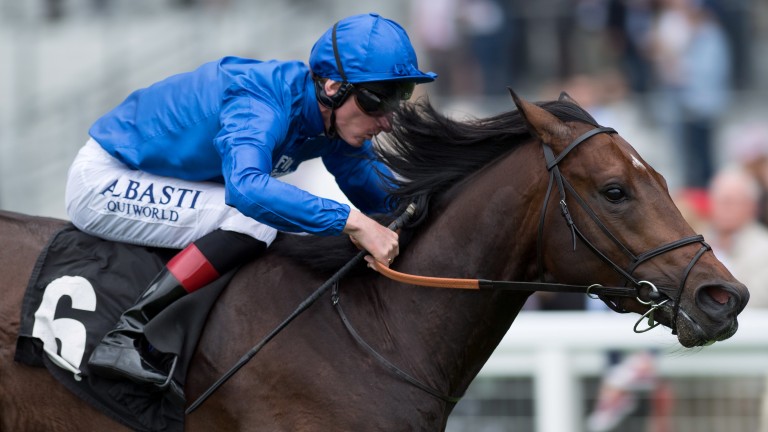 Mythical Magic: has been targeted at the Lockinge by connections
Edward Whitaker

Charlie Appleby, trainer of Mythical Magic
Mythical Magic produced two good performances out in Dubai over the winter, including a very good win in the Zabeel Mile, and comes into this race fresh and well. He didn’t run on Super Saturday or Dubai World Cup night as there weren’t any options over seven furlongs or a mile on the turf, so we decided to keep him for the Lockinge. If he runs up to the level of his Zabeel Mile performance, he should be very competitive in what looks to be an open race.

Simon Crisford, trainer of Ostilio
His reappearance race at Saint-Cloud was disappointing but he has been in good form since and is working nicely so hopefully he can bounce back to his good form of last year, when he just kept on an upward curve.

Ken Condon, trainer of Romanised
It was a nice comeback run, he didn’t have a hard race, he didn’t get the clearest of runs and he needed it, but he went to the line strongly. As he was attempting to give away 5lb we had to be very pleased. He’s come out of the race very well. He's in good shape and that race would have brought him forward again. He’s a big price but I think the conditions should allow him to maximise his abilities – a straight track, a good strong pace and decent ground. 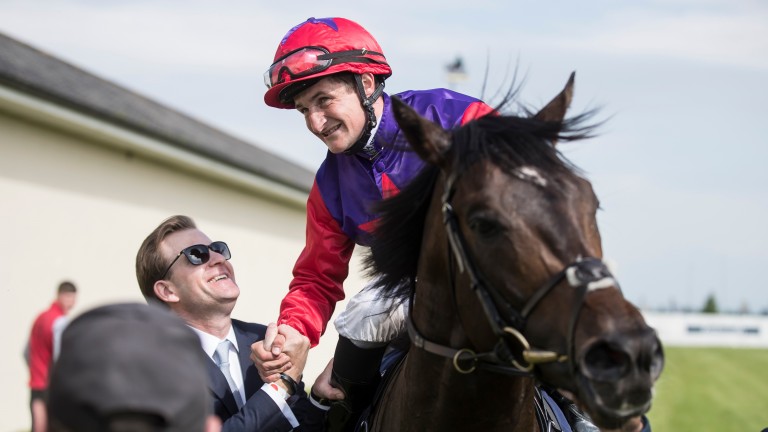 Romanised: warmed up for Newbury by running at Naas
Patrick McCann

Roger Varian, trainer of Sharja Bridge
We were disappointed not to win at Sandown but it was a career-best and showed he’s up to this grade. He’s in great condition and I think a straight mile in a truly-run race on a flat track will bring out the best in him. He will have his optimum conditions. He’s getting better with age and has every right to be in the field. He’s going to need everything to go right for him to win a Lockinge but I can see him holding every chance going into the final quarter and then let’s see what happens.

Richard Hannon, trainer of Billesdon Brook
I don’t think she handled the Dip all that well last time because it was pretty quick ground and she got tired on her first run. She’ll be much sharper and while she’s a big price, that doesn’t worry me.

Get exclusive insight from the track and live tipping withRaceday Live - our up-to-the-minute service onracingpost.com and the Racing Post mobile app

FIRST PUBLISHED 6:00PM, MAY 17 2019
People are saying it?s an open race and there is no standout, but there are a lot of quality horses she?s taking on