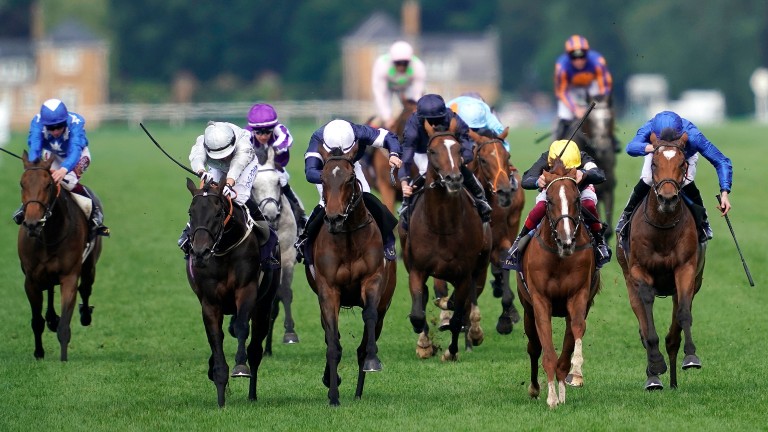 Punters fuelled by Frankie Dettori fever helped increase betting turnover on Friday at Royal Ascot last week by 30 per cent compared to the same day last year, according to figures recorded in Ladbrokes and Coral shops.

The firm released those details on Tuesday when revealing the Gold Cup – the main race at Royal Ascot – had cemented its status as the most popular with punters for the second year running.

Saturday's Diamond Jubilee Stakes kept its position in second in the retail-inspired list, but the Coronation Stakes and King Edward VII Stakes, which both took place on Friday, were new entries in the top five, leaping to third (from seventh) and fifth (from 23rd). 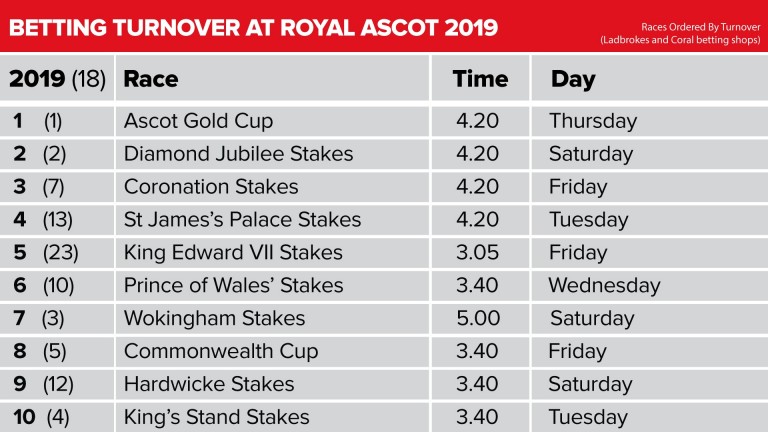 That helped drive betting turnover on the high street that day, when punters were still basking in the glow of Frankie Dettori tearing the layers to shreds by winning the first four races on Thursday, which included the Gold Cup on evens favourite Stradivarius.

Simon Clare, Ladbrokes Coral's PR director, said: "The Gold Cup was once again the biggest betting race of the week, but the turnover-boosting presence of hot favourite Stradivarius was then turbo-charged by Frankie riding the first three winners on the day, which saw a 25 per cent increase in stakes versus last year's race.

"The presence of short-priced, big-name favourites also proved a catalyst for turnover growth on the Coronation Stakes with Hermosa, and the King Edward VII Stakes with Japan, but the incredible events of the day before with Frankie's four-timer will also have contributed to an overall turnover surge on Friday, which saw numbers on the day increase 30 per cent year on year – by far the biggest over the five days." 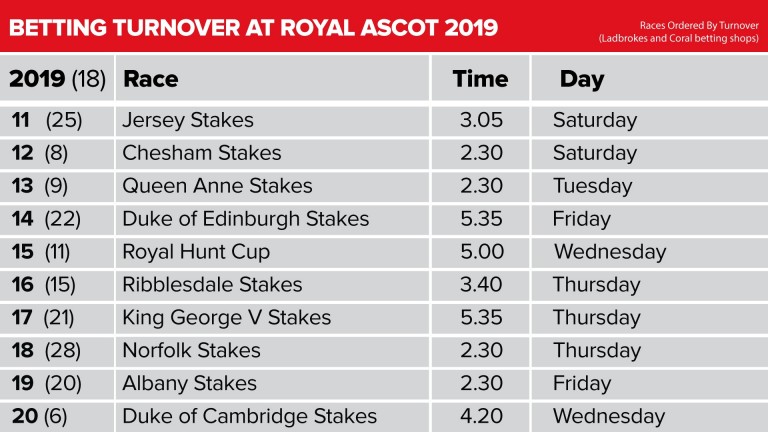 The Jersey Stakes was another big improver, jumping from 25th in last year's list to 11th – a benefit of moving from the last race on Wednesday to the second on Saturday.

Ascot's feature races are slated for 4.20 – the fourth slot on each day – and the St James's Palace Stakes completed a full house in the top four, an improvement from 13th.

The Prince of Wales's Stakes – Wednesday's highlight that was moved to 3.40 to accommodate Japanese interest in Far East raider Deirdre – still performed well, although the Duke of Cambridge Stakes, which took its prime position, did not, falling to 20th from sixth 12 months ago.

Clare went on to say turnover was assisted by having no major football tournament as competition and by the reduction in maximum stakes on FOBTs, but questioned if some of the royal meeting's key handicaps, which take place at 5.00, are staged too late in the day. 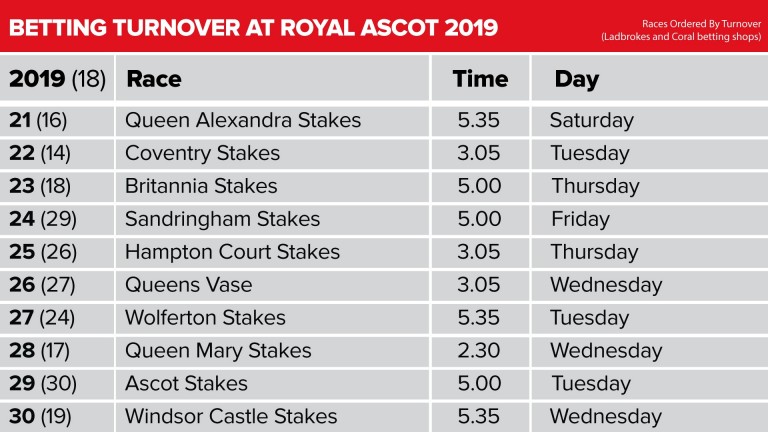 He added: "What is slightly perplexing is the relative poor performance of some of the big-field handicaps – the Britannia, Sandringham and Ascot Stakes. On an average Saturday any three of those races would be the biggest betting race of the day, but they don't generate what one might expect given their competitiveness.

"Perhaps the 5pm start time and position as the fifth race on the card is a factor, and they might perform better earlier as support acts to the quality feature races."

That off-time had been viewed as being particularly betting friendly, and Clare continued: "The Wokingham Stakes belies that time slot even if it dropped a few places this year to seventh from third, although a 5pm start time on a Saturday may not have quite the same impact on turnover as it would on a midweek day when people are leaving work and travelling home.

"It's certainly one betting aspect of the meeting that is worth a look at."

In response, Ascot's director of racing and communications Nick Smith said: "All these things will be considered in the fullness of time, including with our own on-course betting patterns."

FIRST PUBLISHED 6:22PM, JUN 25 2019
What is slightly perplexing is the relative poor performance of some of the big-field handicaps