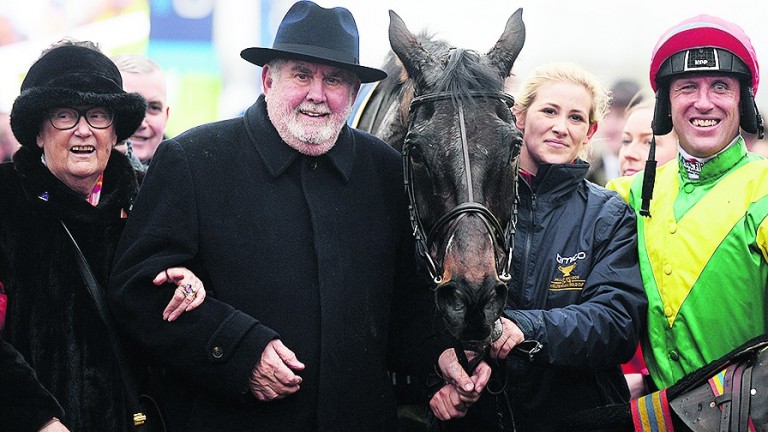 Alan Potts: horses like Sizing John will continue to race in his colours until they retire, according to Jessica Harrington.
Harry Trump/Getty Images
1 of 1
By David Jennings 8:09PM, MAR 29 2017

Robbie Power enjoyed a fantastic Cheltenham Festival capped by Sizing John in the Gold Cup, a winning ride that has earned him a coveted new job as retained jockey to powerful owners Alan and Ann Potts.

The upgraded association begins at Taunton on Thursday, but much bigger fish await at Aintree next week, where Power will be aboard Finian's Oscar and Queen Mother Champion Chase runner-up Fox Norton, at the expense of Tom O'Brien and Aidan Coleman.

Power gave the husband-and-wife Potts team their proudest moment when steering Sizing John to success in the Gold Cup, and Alan Potts was so impressed by what he witnessed that he wants the 35-year-old on all his horses.

Jessica Harrington will still have first call on Power's services, but whenever available Power will ride for Potts, starting at Taunton – a track where he has never ridden – where he will partner Sizing Granite and Sizing At Midnight, both trained by Colin Tizzard.

Power will then head to Tizzard's Dorset yard on Friday morning to get to know Finian's Oscar and Fox Norton.

Alan Potts told the Racing Post on Wednesday: "Robbie will be my number one and will ride for me whenever he's available.

"He'll ride Finian's Oscar, Fox Norton and Supasundae for me next week at Aintree. My other runner at Aintree will be Sizing Solution in the Foxhunters', but that's obviously for amateur riders.

"Unfortunately Finian's Oscar had to miss Cheltenham, but he's back fit and firing again and he heads to Aintree in great form. Fox Norton made up a lot of ground late in the Queen Mother, and perhaps if he was a bit closer he might have won it."

'I was very impressed'

He added: "The thing that impressed me most about Robbie was that he told us what he was going to do before the Gold Cup and he went out and did it. I was very impressed by what he did at Cheltenham."

Power's season goes from strength-to-strength. He had never won the Irish Gold Cup (formerly the Hennessy) or the Cheltenham Gold Cup before Sizing John came along.

Indeed, his only previous Cheltenham success before this month was on Bostons Angel in the 2011 RSA Chase. Now he has four festival winners on his CV following the victories of not just Sizing John but Supasundae (Coral Cup) and Rock The World (Grand Annual). 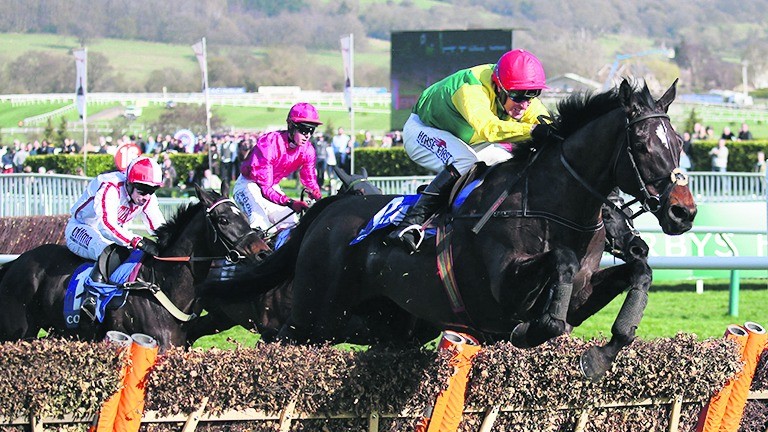 Power heads to victory in the Potts colours on Supasundae in the Coral Cup
Harrington will continue to have first call, but Power's new role will open up many more doors for the hugely popular County Meath native, who won the 2007 Grand National on Silver Birch for Gordon Elliott.

Power said: "It's a fantastic opportunity and I have some very nice horses to look forward to.

"It's been a fantastic couple of weeks for me and let's hope we can continue at Aintree the way we left off at Cheltenham. I've always been quite a positive person and always believed something good was around the next corner.

'Jessica will still have first call'

"Jessica will still have first call on me and I'm still her number one, but I will ride for Alan and Ann whenever I can. I'm really looking forward to Aintree, and Finian's Oscar, in particular, looks really exciting."

Joe Tizzard, assistant trainer to father Colin, has no qualms with the owners' decision to make Power their new number one and is happy for him to ride their high-profile horses at Aintree.

Tizzard said: "Robbie's record speaks for itself. We'll be more than happy to have him on the horses. He's going to kill two birds with one stone by riding at Taunton and then schooling for us on Friday.

"Aidan [Coleman] and Tom [O'Brien] will be disappointed, but Alan had retained jockeys before and it's something top owners do."

Mar 17
Enjoys biggest success of career on Sizing John in the Cheltenham Gold Cup, before landing the festival-closing Grand Annual on Rock The World

Mar 29
Unveiled as retained jockey to Alan and Ann Potts

Mar 30
Set to ride for first time at Taunton

FIRST PUBLISHED 5:05PM, MAR 29 2017
The thing that impressed me most about Robbie was that he told us what he was going to do before the Gold Cup and he went out and did it