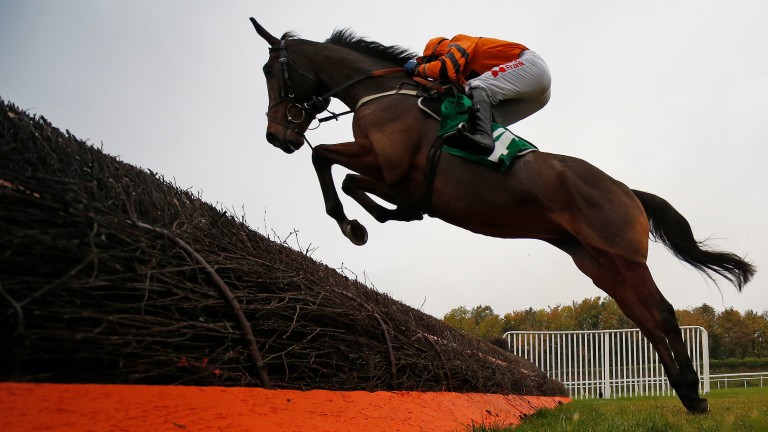 Tom Scudamore and Thistlecrack en route to a spectacular winning debut over fences at Chepstow
Alan Crowhurst
1 of 1
By Graham Dench 1:59PM, NOV 12 2016

Racegoers should be in for a treat when Ryanair World Hurdle winner Thistlecrack gets his first look at Cheltenham's fences in the mallardjewellers.com Novices' Chase. Unfortunately Channel 4 viewers will have to wait for a recording, as live transmission will not begin until after the race is over.

If Thistlecrack negotiates Cheltenham anything like so brilliantly as he jumped the two long lines of fences at Chepstow on his chasing debut last month, his three opponents will be racing strictly for place money. And if he wins in a similar style it is likely his already cramped odds for the Timico Cheltenham Gold Cup will contract still further.

A best-priced 4-1 with Bet365 for a Gold Cup in which previous winners Coneygree and Don Cossack can both be backed at double figures, he is also just a 6-1 chance for the 32Red King George VI Chase, in which only his stablemate, the 2015 winner Cue Card, and Douvan are shorter.

While trainer Colin Tizzard insists that the King George is just an option at this stage, he gave a strong hint that it could easily come into the reckoning if Thistlecrack impresses again.

"I wouldn't say we are committed to the King George. At this stage it's just an option, but I entered him because I didn't want us getting to the middle of December and thinking it looks really winnable and him not being in it. I had to put him in."

Thistlecrack has won his last six races, four of them at Grade 1 level, and seven from eight since his association with Tom Scudamore began. He has not been seriously tested since he was beaten by Killultagh Vic in a Grade 1 novice hurdle at Punchestown 19 months ago.

Tizzard knows just what Thistlecrack needs now, and no fences have been jumped since Chepstow. He confirmed: "He hasn't jumped at all since Chepstow. He didn't need to. I don't think it would have done the horse any good, and it mightn't have done me any good either. You don't have to do it all the time, and he had done plenty before he went to Chepstow.

"We've just trained him as we train him all the time. He's got his own routine and takes plenty of work. He's just a lovely horse and that race tightened him up. With a clear round he'll take all the beating."

Marinero has won only one of his eight races over fences, but there was a lot to like about last month's Galway second to smart Monksland, where his jumping was outstanding and he was worn down only on the extended run-in after jumping the last clear.

If Marinero were to beat Thistlecrack his trainer Henry de Bromhead could be excused if he took a special delight in it, having recently lost to Tizzard so many good horses he trained for Alan and Ann Potts.

De Bromhead said: "Marinero seems in good form and has plenty of experience over fences, so we're hoping for a good run."

Aqalim has had a rear view of Thistlecrack on four of his last five starts, but the Chepstow second on just his second run over fences was a big step in the right direction and there is method in trainer Tim Vaughan's madness.

Vaughan explained: "He can go to Cheltenham with no pressure and hopefully pick up some nice prize-money. He didn't jump great on his first try over fences at Bangor, so we went to Chepstow with him knowing that Thistlecrack would put a lot of others off and he could go and learn his job.

"He was brilliant that day and is going the right way. There'll be a nice day for him down the road somewhere."