Tizzard hoping star will be back in action by Christmas 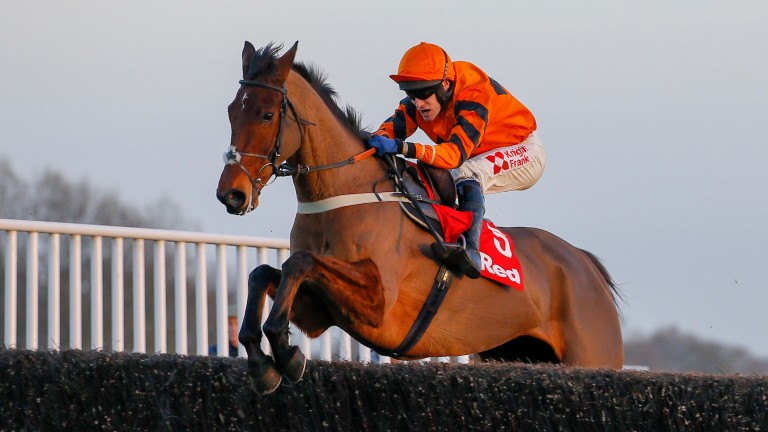 Colin Tizzard expects his sidelined superstar Thistlecrack to be back in action by Christmas but could not mask his disappointment on Tuesday after the 7-4 ante-post favourite for the Timico Cheltenham Gold Cup and the festival's biggest star was ruled out with a tendon tear.

The stable still holds two potent aces in the shape of Native River and Cue Card, who were last night vying for favouritism.

Tizzard broke the news of Thistlecrack’s defection to the Racing Post at lunchtime on Tuesday, having first become concerned on Monday evening.

“Thistlecrack was a bit sore last night at evening stables but these things are sometimes nothing and by the morning horses are fine as they have just given themselves a bit of a knock,” said Tizzard.

“But we were definitely not happy with him this morning and the vet was in doing some routine jobs and he scanned him there and then and found the problem which is a little tear in a tendon.”

Tizzard stressed that the problem is not career threatening and that he expected the nine-year-old to be back in action next season.

He said: “It's not very bad - it's not like breaking down - it's just a bit of heat. The vet said he should be absolutely fine by Christmas and we'll have him back on the racecourse then. I'm sure as I can be, we trotted him up this morning and he was fine, he's not lame."

Although still a novice over fences, Thistlecrack took the senior chasing division by the scruff of the neck when routing his rivals in the King George VI Chase at Kempton over Christmas, before suffering his first defeat of the season when going down narrowly to the ill-fated Many Clouds in the Cotswold Chase at Cheltenham in January.

Stablemate Native River has replaced Thistlecrack as 3-1 market leader for chasing's most important prize with Betfred, Paddy Power and Boylesports. Another Tizzard charge, Cue Card, was initially cut to 4-1 but was soon trimmed further into a general 7-2.

“They [Native River and Cue Card] have been doing a wonderful job in last week or ten days,” said Tizzard. “We've all seen it happen, we all dread it when you train racehorses. It's just so disappointing for everyone, everyone wanted to see him run at Cheltenham.”

Liam Glynn of Boylesports, who offer both at 3-1, said: "Sadly Thistlecrack will miss the Gold Cup and we will leave it up to punters to decide between Cue Card and Native River which one they want to make the clear favourite but at present we cannot separate the Colin Tizzard pair."

In a clear demonstration of the strength in depth in Tizzard's yard, Betway offer just even-money about the Dorset trainer saddling the winner of the Gold Cup in Thistlecrack's absence.

Paddy Power also announced that they would be refunding all ante-post bets on Thistlecrack struck before they went non-runner, no bet on the race, in the form of free bets. Unibet, who also refunded single bets, said accumulators including Thistlecrack would stand with the injured horse removed from the bet.

Champion trainer Paul Nicholls, who on Tuesday hosted a morning to talk the media through his festival team and revealed Saphir Du Rheu to be on course for the Gold Cup, said: "It's a blow to everyone and we're all disappointed. It's a nightmare. You're always on the edge with them."

"But I’m sure he'll be back," added Nicholls. "It's not ideal aged nine and with a leg injury I'm sure they'll take their time and won't rush him back to after Christmas and look to run him in next year's Gold Cup when he'll be ten. You can still win it at ten.

"It's still going to be a very good Gold Cup, but he added intrigue, being a novice. It won't be the last one [to get injured] before Cheltenham, but it’s sad when it happens."

The Gold Cup has been hit especially hard in what has been an extraordinarily injury-plagued festival this year.

Thistlecrack, the ante-post favourite virtually since the market was created, joins the last two winners Don Cossack (subsequently retired) and Coneygree on the injured list.

Ryanair Chase winner Vautour, who tragically died in a freak accident at home before the season got into full swing, had also been fancied as a Gold Cup contender this time around.

FIRST PUBLISHED 12:57PM, FEB 21 2017
He had heat in his leg last night. The vet scanned him this morning and it's a slight tendon tear