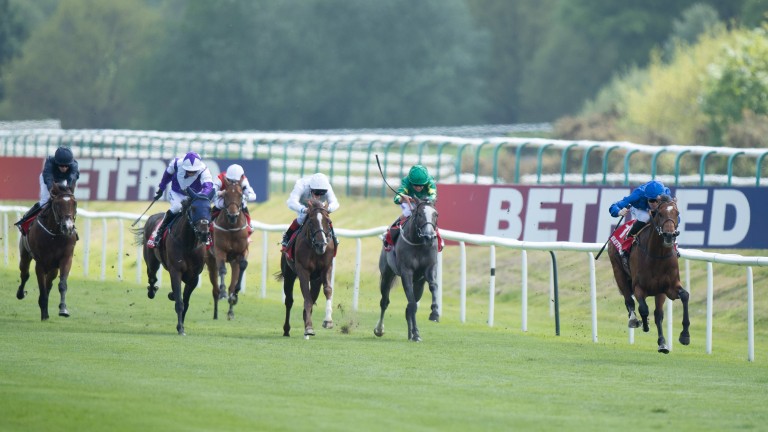 Best Solution and Pat Cosgrave storm clear to win the Derby Trial
Edward Whitaker
1 of 1
By Jon Lees 5:31PM, MAY 13 2017

What happened to Thunder Snow in last weekend's Kentucky Derby may never be satisfactorily answered, but Godolphin trainer Saeed Bin Suroor was given a more welcome Classic dilemma when Best Solution, another colt who has dabbled on dirt, captured the Betfred Derby Trial.

A week ago Thunder Snow, the UAE Derby winner Bin Suroor believed could end Sheikh Mohammed's long quest for victory at Churchill Downs, was pulled up after after exiting the stalls bucking and kicking.

Best Solution had finished 38 lengths behind his stablemate in the UAE 2,000 Guineas at Meydan but returned to turf, on which he was Group 1-placed last year, he made a strong bid for Epsom consideration with a three-and-quarter-length victory.

Bin Suroor will test another Investec Derby contender Benbatl in the Betfred Dante Stakes at York next Thursday, but in beating the slow-starting Glencadam Glory – himself three lengths in front of Tartini – Best Solution made a strong case for his inclusion in the Classic.

He was cut to between 10-1 and 16-1 (from as big as 33) for the Derby and Bin Suroor said: "Best Solution didn't handle the dirt in Dubai but this was the ground for him.

"He's had a break since Dubai and I'm sure he'll improve a lot for this race too. The way he works in the morning showed he needed a mile-and-a-half trip.

"More than likely he'll be running in the Derby. He won this really well and showed class for the future. I think he'll handle Epsom."

Thunder Snow, now back in Newmarket, will get another chance to prove himself up to European Classic standard.

"It was hard to understand, but the horse is back and today he trained in Newmarket," said Bin Suroor. "He was absolutely flying before the race. I thought he'd be first or second in the race.

"What happened in the stalls, who knows. After the race there was nothing wrong with him at all. More likely we'll take him to the Irish Guineas and keep our options open.

"I've never seen anything like it in my life. On the plane back I had so many questions but no answer."

Glencadam Glory, who lost five lengths at the start, could also head to Epsom, but not stablemate and third home Tartini, according to John Gosden.

"They've both run well," he said. "Tartini goes for the Vase [at Royal Ascot], and Mr Hillman would like to run Glencadam Glory in the big one [the Derby].

"The trainer has no problem with that – he just has to get him to leave the gate with the others rather than a number of lengths behind. Last time it was 20 lengths, so we're improving.

"But he's a grand horse and he's learning, and the winner has Group form. I just have to tidy him up at the gate. We've ironed a lot of things out with him, we just have to iron this last one out."

Ballydoyle hope Sir John Lavery could manage only sixth, beaten 16 lengths, and was pushed out to as big as 33-1 for the Derby (from around 10), though jockey Ryan Moore said: "He was only just ready, he got a bit tired; I wouldn't lose faith in him."

FIRST PUBLISHED 2:47PM, MAY 13 2017
He’s in the Derby and the Irish Derby and the longer trip will suit him. Epsom is more likely