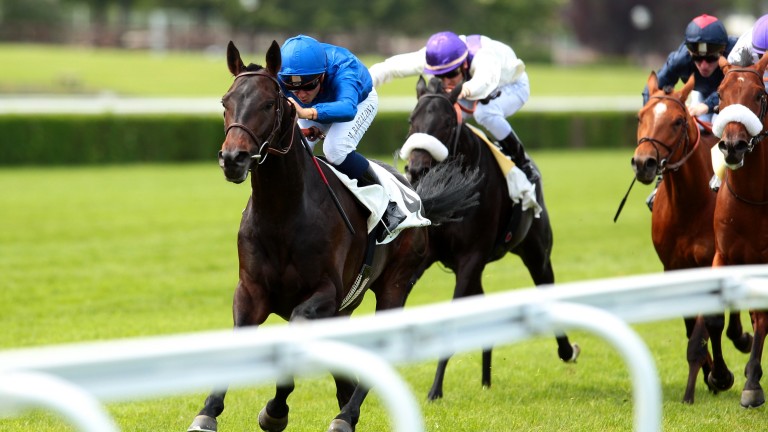 Cloth Of Stars and Mickael Barzalona held off the late charge of Zarak to just come out on top in a Prix Ganay in which both principals had to overcome a troubled passage.

Neither colt had previously succeeded at Group 1 level and it was Andre Fabre’s four-year-old who won the battle, though not conclusively the war, given that this was only the first shot in Europe’s middle-distance encounters for the season.

The result crowned a fine day at Saint-Cloud for Fabre, who also took the Group 2 Prix du Muguet with Jimmy Two Times as well as unveiling Straight Shooter, a hugely exciting three-year-old son of Frankel.

"Cloth Of Stars would have liked a faster pace but that is certainly his best form," said Fabre, who considered him talented enough to tackle last season’s Derby, the only time he has finished out of the first three in 11 starts.

Last season there were difficulties in getting the son of Sea The Stars to settle in two attempts over a mile and a half and Mickael Barzalona believes the four-year-old’s growing maturity has been instrumental in his development.

Barzalona said: "Today he showed the best of himself. He's become easier to manage and has grown up a lot. He's very gifted and, now he settles, you can ride him a little more positively."

Godolphin's winner is between a 7-1 and 10-1 chance for the Prince of Wales’s Stakes, while he is a best-priced 11-1 for the Coronation Cup.

Fabre would not commit to future targets but observed: "I think now he needs to go back up to a mile and a half."

Despite the commercial consolation of the winner providing a new Group 1 winner for a stallion who stands at the Aga Khan’s Gilltown Stud, there was evident frustration in the camp of Zarak, who failed by a short neck to reel in Cloth Of Stars after Christophe Soumillon had to wait for an opening, then lost his whip inside the final furlong.

Trainer Alain de Royer-Dupre is also looking at a mile and a half for the first racing son of the great Zarkava.

He said: "It's a good pointer for the future. He showed he could stay 2,400 metres and the Grand Prix de Saint-Cloud isn’t out of the question."

Silverwave edged out Erupt for third, with Hawkbill further adrift in fifth.

Hawkbill's trainer Charlie Appleby was successful later on the card when Wolf Country made all to land the Listed Prix de l’Avre, after which he said of Hawkbill: "He travelled well but is showing he wants a mile and a half now."

Erupt pleased Francis Graffard on his first start since the Japan Cup and is likely to stay at a mile and a quarter, with Alan Cooper, racing manager to the Niarchos family, suggesting the Prince of Wales’s Stakes and Belmont’s Manhattan Handicap would come under consideration.

Jimmy Two Times was cut to a general 14-1 chance for the Queen Anne Stakes after instantly repaying Godolphin’s investment in the Prix du Muguet.

Fabre said he is considering a supplementary entry for the Al Shaqab Lockinge Stakes after the four-year-old once again showed the benefit of being stepped up to a mile this season.

The trainer said: "The extra distance has helped him. Now he has to go up to Group 1 and Newbury is an option for him."