Godolphin raider Wuheida the 'one to beat' after skipping Nassau 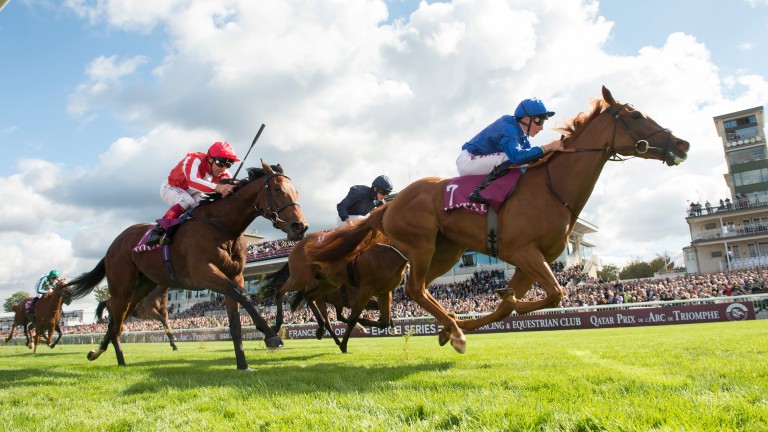 Wuheida: daughter of Dubawi was second in the Falmouth last time
Edward Whitaker
1 of 1
By James Burn 12:46PM, AUG 5 2017

A leg injury denied Godolphin's Wuheida a crack at Classic glory in Britain, but trainer Charlie Appleby is hoping she can make up for lost time in Sunday's German Oaks, which carries a first prize of £256,410.

William Buick's mount won the Prix Marcel Boussac on her final start at two and had been aimed at the 1,000 Guineas and Oaks, but she suffered a stress fracture to her right hind leg in the spring.

She returned with a fine second to Roly Poly in last month's Falmouth Stakes, but the rain at Goodwood meant she skipped Thursday's Nassau Stakes.

Appleby, who is seeking his first winner in Germany, said: "I was delighted with her in the Falmouth and that form got a nice boost with Roly Poly going on to back it up in the Group 1 Prix Rothschild.

"She's come out of the race very well and it was always our plan to step her up in trip in time, and with the ground going the way it is and missing the Nassau this was our next opportunity.

"She's given every indication she'll appreciate stepping up in trip. She did it on the front end or close to the pace in the Boussac over a mile as a two-year-old and we've always viewed her as an Oaks filly. We'd have liked it to be the English Oaks, but that didn't materialise after her setback."

He added: "I couldn't be any happier with the way she looks and how she's prepped going into the race. It's all positive, and we have a nice draw [stall two] as well.

"It's a tightish track, so we'll need some luck in running, but on the book she's the best filly in the race and they've got her to beat.

"The Germans can produce good horses, especially those who want a trip as well, but it's generally Group 2/Group 3 form over there and she's already a Group 1 winner – nothing else in the field has been competitive at that level yet."

The main home challenge looks likely to come from Tusked Wings and Lacazar, who had a host of Sunday's rivals behind them when winning Group 2 and Group 3 trials.

Wohler, who predicted the ground would be on the soft side after rain at Dusseldorf on Saturday, confirmed Prima Violetta as his likely leading contender.

"She's the filly Eduardo Pedroza has chosen," he said. "She's run only twice and won first time out at Dusseldorf, then had a long break because the race she was meant to run in was cancelled. She was second in a Listed race last time, which was good, and she's improved since.

"Megera had some decent form before her last race, where she didn't like the heavy ground at Hamburg. That aside, she's a really nice filly with good form, while I've always liked Shy Angel. She didn't like the very soft ground at Hoppegarten either, so hopefully it'll be better for all three, but it'll be tough against Wuheida, who is the one to beat."

FIRST PUBLISHED 12:46PM, AUG 5 2017
It's a tightish track, so we'll need some luck in running, but on the book she's the best filly in the race and they've got her to beat

Can one-of-a-kind Jim Bolger pull off more Group 1 heroics with Poetic Flare? One trainer, one jockey, one horse and one race to note on Royal Ascot day one 'It's been a great week' - Charlie Appleby's amazing run of success continues 'I like fast things - as well as Adayar I like to partner planes out of Duxford' Charlie Appleby reveals next step for Derby hero Adayar with Arc on the horizon 'I'd work another 15 years as hard as I could to have one more day like that'