The BHA will wait until Friday lunchtime to decide whether racing can go ahead at Leicester next Tuesday, despite the city being locked down after a surge in new cases of the coronavirus.

Leicester's meeting this Tuesday was cleared by local health officials and the BHA just hours before the first race but drew widespread criticism, with several trainers opting to withdraw their runners.

On Monday evening, health secretary Matt Hancock announced that non-essential businesses and schools would have to close in the city.

It was initially reported by Sky News on Wednesday that similar localised measures could soon be implemented in a matter of days in up to 36 'at risk' areas, with several racecourses falling in zones mentioned, but a confused picture later emerged over how much testing data local authorities were receiving.

The BHA will speak to industry leaders regarding the challenges arising from local lockdowns and their impact on future meetings and has taken entries as normal for Leicester's meeting on Tuesday. There were a total of 157 entries made across the eight races scheduled on the card.

A spokesperson said: "Yesterday’s meeting was held with the approval of the local authority and Public Health England under the strict protocols agreed before sport's resumption behind closed doors.

"The lockdown effectively reinstated restrictions as they were on June 14, in the view of local officials, when racing was permitted in accordance with UK government guidelines.

"Given local lockdown measures may still be evolving, it’s important that dialogue continues ahead of any future events in Leicester. Our industry colleagues will be briefed on this dialogue and will consider any potential impacts on racing. Our focus continues to be on making sure racing behind closed doors takes place as safely as possible."

Officials at Leicester City have said they can safely play their Premier League fixtures at the King Power Stadium, which is near the city centre. The racecourse is on the outskirts of the city in Oadby. 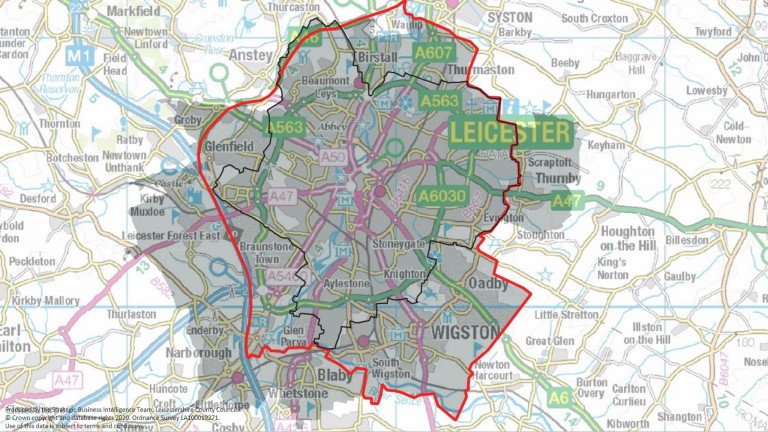 The area affected by the lockdown includes Oadby, where the track is situated

Leicester stewards were forced to hold an inquiry before racing on Tuesday morning, when they decided the meeting could go ahead using flip starts, as only four stalls handlers reported for duty.

Due to the late notice there was not enough time for Racetech, which employs the stalls handlers used at most tracks, to find replacements to make up to the mandatory team of 11 to operate the stalls.

"It was disappointing not to be able to provide the required number of stalls handlers to cover yesterday’s meeting at Leicester," said Racetech's Kate Hills. "However, we respect that several members of the team felt uncomfortable to work following the government’s announcement to reimpose lockdown measures in the area.

"We are engaging with all our stalls team members to ensure we have adequate cover for the next meeting at Leicester on June 7.

"For any future incidences of lockdown being reimposed in areas with racecourses, we will give as much notice as possible to ensure we have staff who are willing to attend and can plan accordingly."

'Those attending any meeting are in a safe environment'

George McGrath, chief executive of the National Association of Racing Staff (Nars), issued a statement via social media on Wednesday afternoon to reassure members who will be attending meetings.

He also suggested Nars was not consulted during the last-minute decision for racing to take place at Leicester on Tuesday.

The statement, written in response to members calling for the meeting to be cancelled online, read: "We have no authority to tell the BHA how, where or when to hold a race meeting.

"While I acknowledge the environmental health officer for Leicester gave approval for the meeting to take place, I would have appreciated the chance to offer a staff perspective.

"Our members need to be considered. Having spoken with the BHA this morning, from this point onwards, Nars will be part of any decision-making process when there is a localised lockdown.

"Regardless of the fact there was a spike in Leicester those attending any race meeting are working in a safe environment. The same protocols that have kept staff safe at the track from June 1 when the whole country was in lockdown are still in place today."

Nars and the National Trainers Federation (NTF) agreed before the resumption of racing that any members of staff who did not feel comfortable attending a meeting would not be required to do so.

Owners set to return to racecourses in time for 'sensational' weekend

FIRST PUBLISHED 1:13PM, JUL 1 2020
Given local lockdown measures may still be evolving, it’s important that dialogue continues ahead of any future events in Leicester