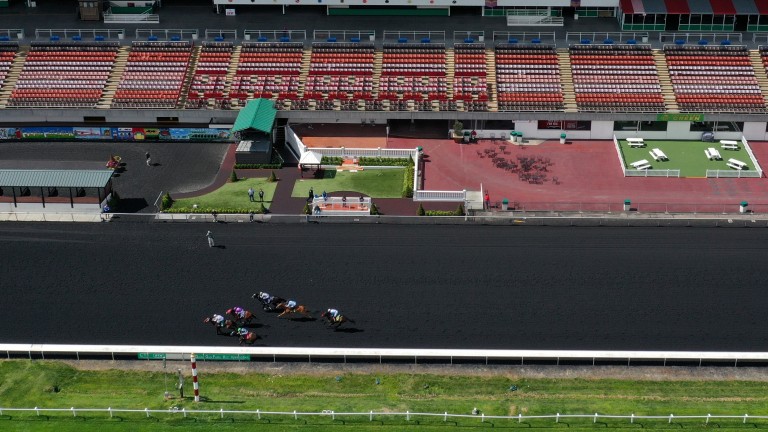 Horses continue to race on the Tapeta surface at Golden Gate Fields in front of empty stands while the coronavirus crisis goes on
Justin Sullivan
1 of 1
10:36AM, APR 7 2020

Located beside San Francisco Bay in Berkeley, Golden Gate Fields has been providing racing to the Bay Area since 1941 but it is a modern innovation that makes it stand out from other US racecourses with its dark Tapeta surface, installed in 2007, being a rarity Stateside where most venues race on dirt.

Like the majority of US tracks, Golden Gate has two tracks, in this case a synthetic Tapeta track of one mile outside a sharper turf course (7f). The Tapeta course is used far more frequently than its grass counterpart.

As for track bias, the Tapeta track at Golden Gate Fields is one of the most punter-friendly and does not favour a specific racing style, although running close to the rail around the turns remains an advantage.

The turf course favours those who race prominently, with the slingshot approach when swinging off the sharp final bend rarely put to use.

Small fields are often the order of the day and the same jockeys regularly feature in the majority of races. Juan Hernandez is the clear standout rider at the track, having won the last two jockeys' titles. Catalino Martinez and Silvio Amador are also high up the pecking order, while 50-year-old Hall Of Fame rider Kent Desormeaux, who holds the record of most races won in a single year (598, 1989) now plies his trade at the venue.

As regards trainers, there is only one man who dominates the winner's circle and that is Jonathan Wong, who is especially good at improving recently claimed horses.