Gigginstown and Elliott out on their own as Ireland dominates again 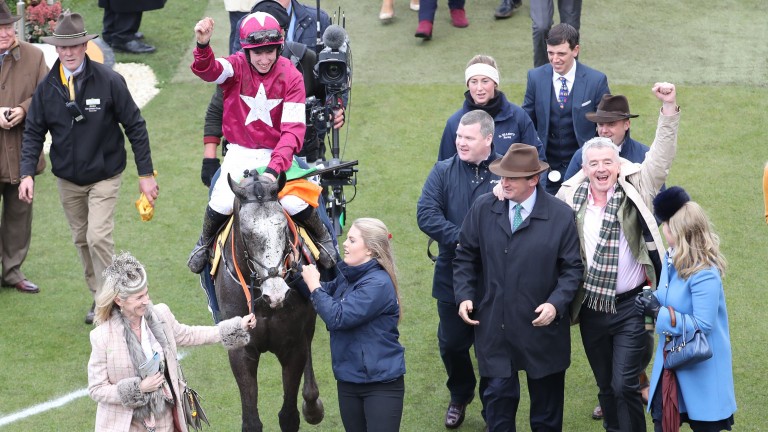 It was all Ireland over the four days and that was reflected in the champions of the festival, with Michael O'Leary's Gigginstown House Stud leading owner, Gordon Elliott again top trainer and Davy Russell edging out Jack Kennedy for the jockeys' title after both rode four winners.

O'Leary, in a state of shock after his seventh winner with Blow By Blow in the Martin Pipe followed Farclas earlier in the Triumph, said: "It's absolutely surreal. Two or three winners would have been a fantastic week. I thought we'd have nothing today given we had three yesterday and five already in the week.

While Gigginstown were a furlong clear of other owners, with JP McManus having to settle for the Champion Hurdle and Grand Annual from his legions, the trainers' title went to the wire for the second year running.

Elliott and Willie Mullins had another ding-dong battle, despite Elliott having a winless first day.

A double on the final day took his score to eight, to match the record high for a festival set by Mullins in 2015.

Mullins had the consolation of taking over, by 61 winners to 60, from Nicky Henderson as the winningmost trainer at the meeting.

Elliott said: "This is great, it's brilliant to win it. Willie Mullins is the man so it's nice to train more winners than him. I can't believe we've had eight, I'd have taken one coming over."

In the Holland & Cooper Clothing-sponsored leading jockey title Russell edged compatriot Kennedy, who rode the first winner on the card for the third day running when landing the Triumph on Farclas.

They finished four apiece, with Russell's one second deciding it, and the winner said: "I gave every horse 100 per cent and got the rub of the green.

"It's great as this is a special place for the family – my dad has been coming here for years and built it up as a fairytale place with all the great riders. It's nice to be in the same category as some legendary names."

The BetBright Prestbury Cup was retained by Ireland comfortably by 17 winners to 11, Colin Tizzard and Paul Nicholls registering last-day doubles to lend Britain some respectability in what had looked like being an embarrassing scoreline.