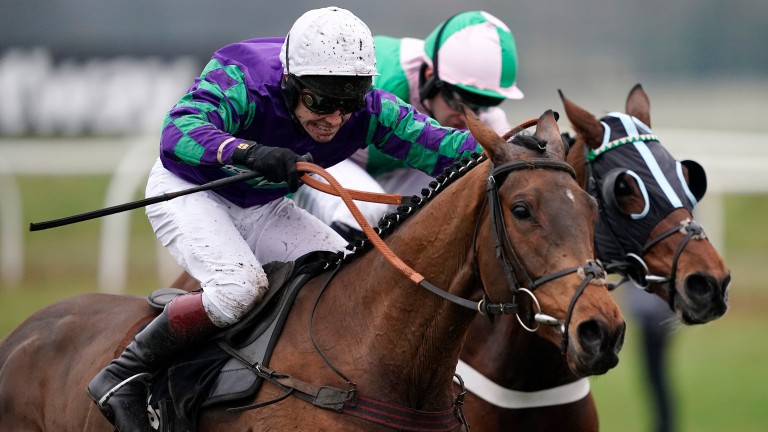 Richard Johnson (left) faces a big weekend in his bid to close on Brian Hughes in the jockeys' title race
Alan Crowhurst
1 of 1
By David Baxter UPDATED 9:51AM, FEB 29 2020

Imagine last month you broke your arm. In order to stabilise the fracture you had a metal plate inserted into said arm. Then, 37 days later you were riding several tons of horse flesh at high speed over hurdles in a race.

If this sounds like madness personified then the career of a jump jockey is not a profession worth exploring. But for those brave, and arguably slightly unhinged, men and women serious injury is an accepted hazard of the job of riding racehorses.

Champion jockey Richard Johnson was left with a broken arm after falling at Exeter last month, but determination and mind-boggling fortitude meant while most of us would still be recuperating from such an injury, he was back in the winner's enclosure at Musselburgh on Thursday not once, but twice.

In Johnson's absence Brian Hughes had pushed ahead in his quest to win a maiden title, but with the four-time champion immediately trimming the deficit to 18, and then to 17 with a winner on Friday, a race that was already simmering nicely could boil over in the next couple of months.

Hughes was in London on Thursday trying to aid his chances of keeping ahead of Johnson but it will be a role reversal on Saturday as Johnson stays in the south with six rides at Newbury, while Hughes will be north of the border with six chances at Kelso.

The Scottish track has been a productive source of winners for Hughes, with nearly 50 winners in the last five seasons, and it is easy to make a compelling case for all of his rides.

For Johnson, the winners do not look as obvious, but it would be folly to write off the four-time champion as he attempts to make further inroads into Hughes's lead.

Definitly Red on the National trail at Kelso

At this stage of the season most roads lead to Cheltenham, but with the festival nearly upon us the majority of those who will be competing at Prestbury Park next month are safely tucked away in their stables awaiting their respective dates with destiny.

But once the dust has settled at Cheltenham focus will swing north towards Aintree and the Randox Health Grand National. Saturday could shed some light on who has realistic aspirations of denying Tiger Roll a third consecutive victory, with Kelso a fine starting point for such discussions.

The Listed William Hill Leading Racecourse Bookmaker Premier Chase (3.22) was successfully used as a stepping stone to the National by Ballabriggs in 2011 when run over a furlong shorter, and this season it will be the setting for another northern hope.

Brian Ellison has mapped out Definitly Red's season to culminate at teatime in Liverpool on Saturday, April 4, and the 11-year-old has the profile of a horse who can flourish in the National.

Kelso's race will likely not provide enough of a stamina test, though the ground should be pretty demanding, but it is all about being primed for Aintree and Ellison is confident Definitly Red can better his 2017 effort when pulled up behind One For Arthur.

Over at Doncaster, the Grimthorpe is a race that has also historically acted as an Aintree marker, though this year it may lend itself as a form guide for alternative Nationals.

Amberleigh House finished fifth on Town Moor in 2004 as a tune-up to his tremendous Grand National victory the same year, and more recently The Last Samuri, winner of the Grimthorpe in 2016, finished second to Rule The World at Aintree.

But of this year's 11-strong field only Definitly Red and Saint Xavier hold entries for the Grand National and Kelso is the first preference for that pair.

However, with last year's winner Chidswell and the hat-trick seeking pair of Fortified Bay and Worthy Farm among the declarations there is no shortage of quality, while some of the runners could emerge as Scottish or Midlands Grand National hopes.

FIRST PUBLISHED 6:00PM, FEB 28 2020
Saturday appears a golden opportunity for Nicholls to close the gap or even turn the tables as he has declared 15 runners to Henderson's two

Our top tipster fancies an upset in decent Newbury contest The Placepot: two bankers to help you pinch a part of the Newbury pot 'I'd dearly love to win it' - Bailey gunning for glory in memory of old friend Allayaali shows Classic bloodlines run strong in debut win for Charlie Hills Dobbin eyeing another Borders National bid with Do No Disturb