Geraghty: now it's time for Yanworth to pass the jumping test 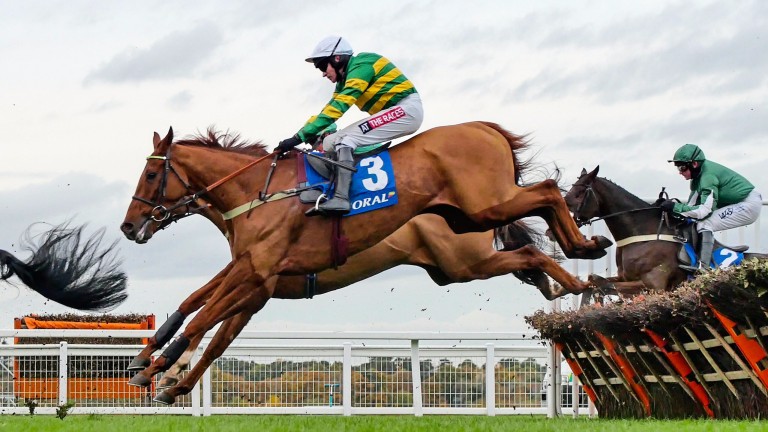 Yanworth is currently the principal British-trained challenger for the Champion Hurdle
Mark Cranham
1 of 1
By David Jennings 7:17PM, JAN 30 2017

All eyes will be on Yanworth on Saturday for what Barry Geraghty is describing as a key test of his jumping – and it may need to be in tip-top shape for the Champion Hurdle as Willie Mullins issued an upbeat bulletin on Faugheen on Monday.

Faugheen missed Sunday’s Irish Champion Hurdle with a muscle issue, but the chances of him making the Stan James Champion Hurdle have improved, with Mullins hoping to have him being ridden out later this week.

An injury to last year’s winner Annie Power and the prolonged absence of 2015 Champion Hurdle winner Faugheen have seen Yanworth halve in price in to as short as 3-1 since victory in the Christmas Hurdle, vying for favouritism with the Mullins star.

The Alan King-trained seven-year-old is now seen as the best chance of a British Champion Hurdle winner since 2012, but first he must excel in Saturday’s Contenders Hurdle at Sandown in what will be his final test before Cheltenham.

'Faugheen's not out of it yet'

Geraghty, whose mount could face fellow Champion Hurdle hope Brain Power on Saturday, said: “Faugheen's not out of it yet and he's still the one to beat until he loses a race or is ruled out.

“But it’s an open race and Yanworth's going at the weekend, so I'm looking forward to him. You'd hope there's more to come from him.

"He needs to brush up on his jumping from Kempton, but if that's the case I'd say he can have a big say [in the Champion Hurdle].

"Brain Power was very impressive at Ascot and he's improving, so he'll provide a good test [on Saturday]."

Faugheen tweaked a muscle behind and was announced an Irish Champion Hurdle non-runner on Saturday afternoon. That news prompted Betfair to push him out to 3-1 for his Cheltenham assignment, but he was back into 5-2 with that firm on Monday.

Mullins said: "Faugheen is a lot better today. He walked out much better this morning and hopefully he'll be back riding out in a few days."

The threat to Faugheen comes from close to home too, though, with the two men who know Petit Mouchoir best both believing he is good enough to win the Champion Hurdle.

David Mullins has branded the six-year-old "a bit special" after his all-the-way success in the Irish Champion Hurdle at Leopardstown, while Bryan Cooper, who was on board for his Ryanair Hurdle triumph at the track over Christmas, has hailed him "Ireland's best hurdler right now".

Despite Sunday's success, Petit Mouchoir was pushed out to 6-1 from 9-2 for the Champion Hurdle by Paddy Power, but Mullins says he was much more impressive than official margin of victory over Footpad suggests.

Mullins said: "I thought he was brilliant and he's a bit special. To be able to gallop a seven-time Grade 1 winner like Nichols Canyon into the ground is some feat.

"We went some speed the whole way and, even after losing momentum at the last, he was able to pick up again on the run-in. Not a lot of horses can do that."

The rider added: "His jumping was absolutely brilliant, apart from the last. He has a great attitude too and he is already an Irish Champion Hurdle winner, so why could he not win the Champion Hurdle at Cheltenham?

"We haven't seen Faugheen in a long time and Petit Mouchoir is improving fast. If Faugheen does not make it, he'll take some stopping I'd say."

Mullins was deputising for Cooper on Sunday and Gigginstown's number one, who continues his rehabilitation from a fractured pelvis, cannot wait to get back on board Petit Mouchoir in the Champion Hurdle.

"I thought Petit Mouchoir was very good on Sunday and he's proved himself to be Ireland's best hurdler right now," Cooper said.

"There was no hiding place and the only reason Footpad got so close was because he was ridden to be placed and stayed away from the speed duel between Petit Mouchoir and Nichols Canyon.

"The Champion Hurdle picture is very murky at the moment but Petit Mouchoir has now won two Grade 1s and has proved himself at the top level.

"I'm not sure whether Yanworth's jumping is good enough over two miles, and who knows whether Faugheen will be there or not? It is wide open right now and Petit Mouchoir is improving quicker than anything else. I have never ridden a Champion Hurdle winner, but he's certainly going in that direction."