George to skip rematch with Orange in favour of autumn campaign 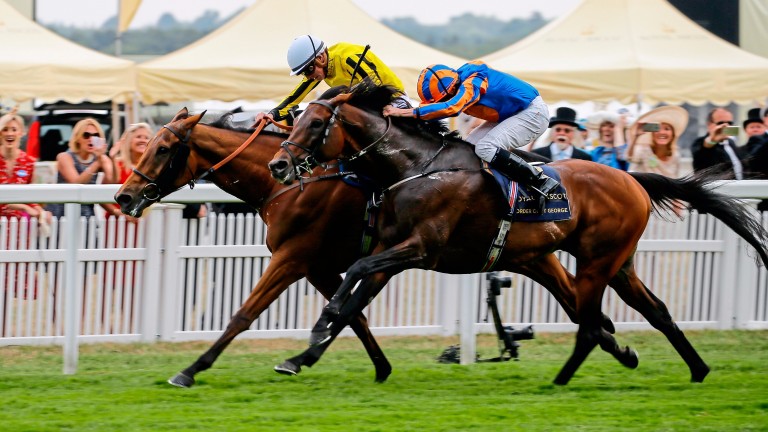 Big Orange's task of winning a third Goodwood Cup – and the first renewal under its new Group 1 status – was made vastly easier on Monday when Aidan O'Brien revealed Ascot Gold Cup victim Order Of St George will not line up in the new day-one feature of next month's Glorious meeting.

Michael Bell's stable star beat Quest For More by a neck in the 2015 edition of the Qatar-sponsored two-mile contest and Pallasator by a length and a quarter in last year's renewal before reaching new heights at last month's royal meeting with a first Group 1 win.

Shortly after Frankie Dettori confirmed the news he would be back in the saddle for Goodwood, having missed the Ascot Gold Cup through injury, O'Brien revealed his main market rival would not be lining up in opposition with an autumn campaign now the plan.

"He won't run," said O'Brien, speaking over the phone at the media launch of the Glorious Goodwood festival. "The plan now is to run US Army Ranger as Order Of St George won't go. He's going to have a midsummer break with an autumn campaign in mind – we'll hopefully bring him back for races like the Irish St Leger."

Order Of St George has run in the last two editions of the Curragh Group 1 contest, winning the Palmerston House Estate-sponsored race in 2015 by 11 lengths but going down by half a length to Wicklow Brave last year.

While there was a shock surrounding Order Of St George missing the race, Bell revealed everything was firmly on track for the favourite.

"He's very much bang on track," said Bell. "It's a shame, we were looking forward to the rematch, but I'm sure there will be plenty of others there to take him on.

"It would be a huge deal if he could do it. It's very significant prize-money, but it would be just incredible to win the race for a third time."

FIRST PUBLISHED 3:49PM, JUL 17 2017
He's going to have a midsummer break with an autumn campaign in mind – we'll hopefully bring him back for races like the Irish St Leger