George not worried about going the extra yards with God's Own 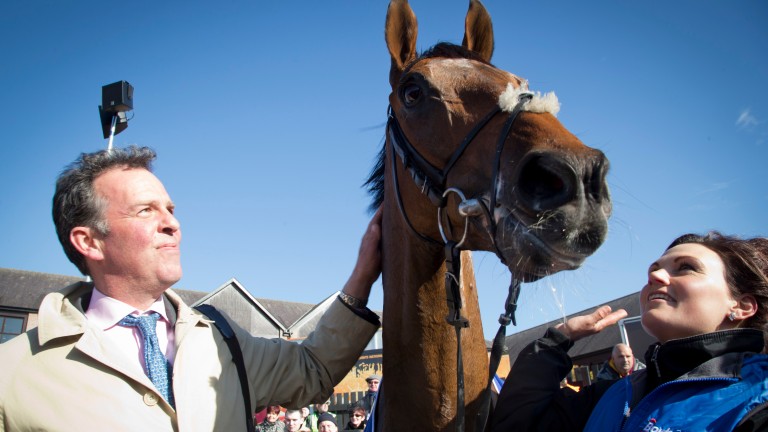 God's Own rounded off last season with Grade 1 successes at Aintree and Punchestown
Patrick McCann
1 of 1
By Scott Burton 6:00PM, NOV 18 2016

Form students shouldn't have to search too hard to unearth the key piece of evidence, with four of the first five home from last month's Old Roan Chase at Aintree reopposing.

On that occasion Third Intention just held the late charge of God's Own, with Vibrato Valtat and Royal Regatta following that pair home.

Last spring Tom George really found the key to God's Own – he might have been involved at the business end of the Queen Mother Champion Chase but for a sloppy jump at the last – winning Grade 1s at Aintree and Fairyhouse.

Paul Nicholls has made clear his feeling that 2015 Champion Chase winner Dodging Bullets is ready for a step up to this sort of imtermediate distance, a thought that seemed to be borne out by his third-placed effort in the Haldon Gold Cup over an extended 2m1f

Stablemate Vibrato Valtat has never won over further than the Haldon trip but was a decent second to Clarcam over 2m4f as a novice and looked fully effective at the trip in the Old Roan.

Kylemore Lough escapes a Grade 1 penalty for his novice success at Fairyhouse last season and was one of the most progressive chasers to emerge from the second half of the campaign.

The classy Eduard is making his first start since finishing fourth to Uxizandre in the 2015 Ryanair Chase.

Royal Regatta has course form figures at Ascot of 26123

Tom George, trainer of God's Own
He's probably a bit further forward than he's been in previous seasons. We were delighted with him at Aintree, where he did everything right. He was a bit unlucky when he got stopped in his tracks three out before running on well. A Grade 1 penalty is never easy but you can’t say he doesn’t deserve. It's the furthest we have run him over but we’re not worried about the trip.

Kerry Lee, trainer of Kylemore Lough
I've been very pleased with his preparation and it was lovely to get the Grade 1 win with him last season. This is a step up again and is a Grade 2 in name only with God’s Own, Vibrato Valtat and Dodging Bullets in there. My horses seem to be needing the run first time out but I'm very happy with him.

Philip Hobbs, trainer of Royal Regatta
On official ratings we’re not well in but he does produce his best performances around Ascot. He doesn’t want very soft ground so hopefully it doesn’t get too deep and he would have a chance of at least picking up some nice prize-money.

Colin Tizzard, trainer of Third Intention
Under the conditions of the race he's going to have to run up to his very best, but it's a good pot and not a big field. He was very progressive last time he ran and beat several of these, so he'll be thereabouts I'd have thought.

Paul Nicholls, trainer of Vibrato Valtat and Dodging Bullets
It was a decent comeback for Vibralto Valtat because he needed the run a bit and he got to the front soon enough as he travelled so well. I’m sure this trip will suit him better and he'll strip fitter for the run. Dodging Bullets will be fitter for his run, the ground is softer and the extra distance should suit. He has a nice chance if he runs to his best.

FIRST PUBLISHED 6:00PM, NOV 18 2016
He will be fitter for his run, the ground is softer and the extra distance should suit. He has a nice chance if he runs to his best