George hoping Shuffle will enjoy himself and make amends 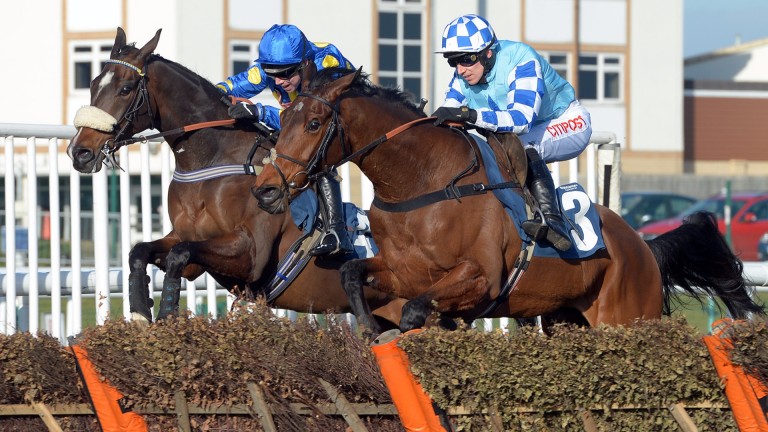 Tom George is hoping a change in tactics was to blame for a very disappointing effort from Double Shuffle when the six-year-old was fancied for the BetVictor Gold Cup at Cheltenham 13 days ago.

Double Shuffle had improved out of all recognition as a novice last season and had made a highly encouraging reappearance, but he was never seriously involved that day and was eventually pulled up.

This is not such a strong race, but it is a decent one nevertheless, as befits a £50,000 Newbury handicap.

Stilletto, who was withdrawn on the day at Cheltenham, is a very interesting contender on his debut for Johnny Farrelly, while San Benedeto, a  stablemate of Stilletto's when that rival was with Paul Nicholls, is another obvious one for the shortlist.

No race for favourites
No outright favourite has won this in the last ten years, but equally it is not a race for rank outsiders as the longest-priced winner in that period started at 14-1.

Making a Splash
Splash Of Ginge returns to the scene of his career-highlight win in the 2014 Betfair Hurdle. He ran off 134 that day and is back down to a mark only a pound higher after peaking at 153 over fences.

Tom George, trainer of Double Shuffle
We got the tactics wrong at Cheltenham as we decided to drop him in and let him switch off – and he switched off too much and never got into the race. This time we'll ride him how we've usually done – have him handy and let him enjoy himself. He's a fresh horse, as he didn't have a hard race there, and if you put a line through that run he'd have a good chance.

Johnny Farrelly, trainer of Stilletto
He seems in good form at home and he'll like the ground. If he gets into a rhythm with his jumping he'll hopefully have every chance.

Paul Nicholls, trainer of San Benedeto
He ran a nice race at Ascot, where the cheekpieces got him jumping and travelling better and he stayed on really strongly. He's run really well at Newbury before and I always thought he was better on a flat track. I've had this race in mind for a while and it looks an ideal opportunity.

Nigel Twiston-Davies, trainer of Splash Of Ginge
He's getting much better handicapped. He ran very well first time out this season but not so well the next. I don't know why that was, but he seems in very good heart and we're looking forward to this.

Evan Williams, trainer of Aerlite Supreme
He should have won last time but didn’t want to. Adam [Wedge] did nothing wrong, it was the horse who lost the race, so we're trying a pair of sheepskins this time. He has the ability to win off this sort of mark and he's run very well at Newbury before.

FIRST PUBLISHED 6:00PM, NOV 24 2016
We got the tactics wrong at Cheltenham and he switched off too much. This time we'll have him handy again