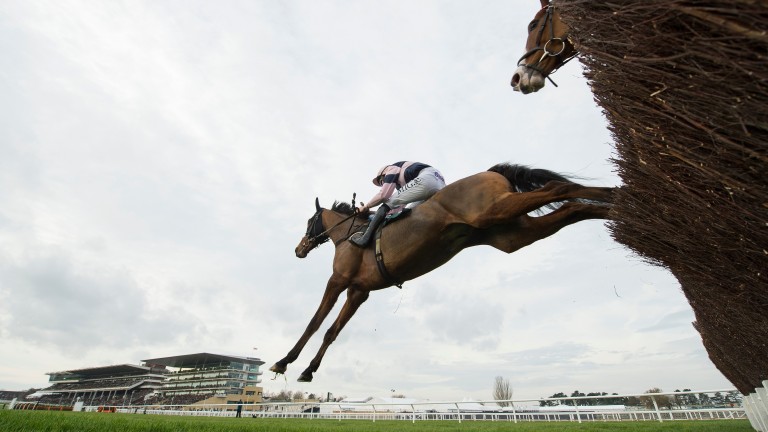 Singlefarmpayment: will be bidding for a third course success
Edward Whitaker
1 of 1
By Maddy Playle UPDATED 12:11PM, NOV 17 2018

Tom George is hoping Singlefarmpayment, who has become a frustratingly frequent bridesmaid, can finally gain a third course win after some notable near misses.

With course form figures of 11B22P52, Singlefarmpayment was a short-head second to Un Temps Pour Tout in the Ultima Handicap Chase at the Cheltenham Festival in 2017 and filled the same position behind Cogry the following October.

Things didn't pan out for him thereafter, as he fell in the Ladbrokes Trophy at Newbury and also failed to complete when upped in class in the Cotswold Chase at Cheltenham.

He again found himself on the wrong end of a photo-finish with Another Hero back at the track in April, but the son of Milan gets his optimum conditions and appears to be well handicapped.

George, who enjoyed success with Bun Doran at the track on Friday, said: "He loves the track and has had some great runs there. He's had a few near misses but hopefully things will fall his way and we can go one better."

The trainer will be hoping a change of jockey aids his chances, with Noel Fehily taking the ride for the first time. It is worth taking note when the pair combine, as they have a +£8.21 profit from a £1 level stake.

He looked to have the world at his feet following a demolition job in the 2015 Cheltenham Gold Cup as a novice but, now aged 11, Coneygree has a point to prove.

Pulled up in the Charlie Hall Chase and Ladbrokes Trophy on his two starts last season, he has to give away weight to his 15 rivals but has had a wind operation since he was last seen and also wears a tongue tie for the first time.

Sam Winner proved it was possible to win under top weight when scoring in 2014 and Midnight Chase hauled 11st 9lb to victory in 2010, and if Coneygree can conjure up his best the reception he will get won't be far away from the one he received three years ago.

Dan Skelton, trainer of Virgilio
He's been a great horse for us but he's very high in the handicap. The trip and ground will be fine for him.

Fergal O'Brien, trainer of Perfect Candidate
He loves Cheltenham and won this race last year but the heavens have opened, so it's different ground this time. He still has quite a high handicap mark but hopefully he'll take his chance. We were very happy with him in October [on his reappearance], so fingers crossed.

Joe Tizzard, assistant to Colin Tizzard, trainer of Royal Vacation
For whatever reason it didn't really happen for him last season but the season before he was a Grade 1 winner. He seems in very good form and if he bounces back to his best he would have an obvious chance. He does need to bounce back but we think we're getting him back to something like his best.

Nigel Twiston-Davies, trainer of Calett Mad and CogryCalett Mad is a good old stayer who should do a good job. Cogry was only beaten a whisker at Cheltenham last time and the extra distance he gets here will help. They both have good prospects.

David Pipe, trainer of Daklondike
He's done well for us and is still only six. The ground won't be as soft as he likes but we've got to start him somewhere. He'll stay well.

Neil Mulholland, trainer of The Young Master and Doing Fine
We’ll see how The Young Master is after his run [on Friday]. He’s had a couple of mishaps early in races before, so we wanted to have this as an option. We’ve stuck a visor on Doing Fine to help him as he’s not been running as well as we’d have hoped.

Nicky Richards, trainer of Looking Well
He was unlucky not to win that big handicap chase up at Musselburgh. He's in good fettle, he stays well and will like the ground. If he can get into a good rhythm we'd be hopeful of a good run.

FIRST PUBLISHED 6:00PM, NOV 16 2018
He loves the track and has had some great runs there. He's had a few near misses but hopefully things will fall his way