Geoff Wragg among leading figures to pay tribute to owner-breeder 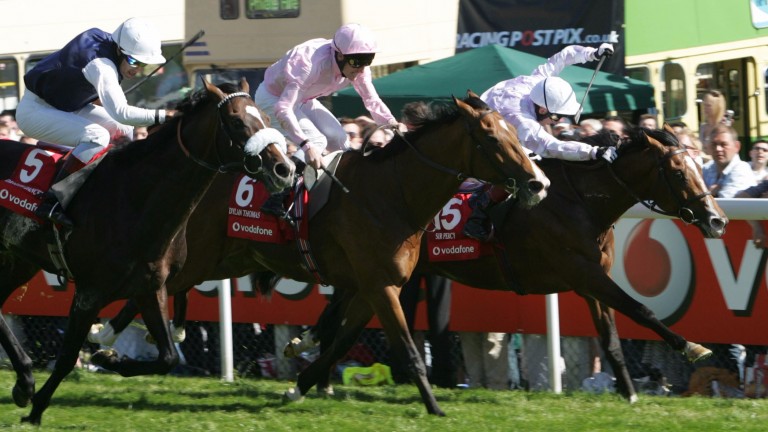 Former trainer Geoff Wragg was on Wednesday among those to pay tribute to late owner-breeder John Pearce, who died last week aged 98.

Wragg recalled how Pearce was invited up to the Queen's box at Royal Ascot after Arcadian Heights had landed the Gold Cup in 1994.

"In those days when you won something at Ascot you picked it up from the weighing room on your way home, there was no presentation," said Wragg.

"We were asked whether we would like to receive the Gold Cup from the Queen in the Royal Box. John, my wife Patricia and I went up there, and the Queen was virtually on her own."

Wragg also trained Dragon Dancer for Pearce, who came agonisingly close to fulfilling the owner's lifelong dream of winning the Derby when beaten a short head by Sir Percy in 2006.

"I thought he'd won," admitted Wragg, who took over training for Pearce after being recommended by friend and former neighbour Lord Huntingdon.

Wragg said: "William [Hastings-Bass, now Lord Huntingdon] and Sue invited us over to supper with John Pearce. We weren't meant to know but John was looking for a new trainer and he wanted to look us over.

"We had hardly got through the first course when he looked at me and asked me to train his horses. There was great celebration and it was a partnership that lasted until I retired in 2008."

Kirsten Rausing boarded Pearce's mares for more than 30 years and she recalled how owner and trainer had marked Dragon Dancer out several months before paying 200,000gns for the son of Sadler's Wells.

"Mr Pearce's ambition was always to win the Derby," said Rausing. "One year he realised his own yearlings wouldn't be suitable so he asked if I had one that might one day become a Derby horse. I said to him, 'As a matter of fact I have two, a chestnut and a bay'.

"He and Geoff Wragg came to Staffordstown in County Meath, where we keep the yearlings. We looked at his own homebred yearlings and then mine. I showed him the chestnut colt and the bay colt.

"They made no comment and it was never mentioned again. The bay was a very nice horse by Sadler’s Wells and was sent to Tattersalls that October, the first year Sheikh Mohammed didn’t buy Coolmore-sired yearlings.

"This only became apparent as the sale got under way and he went in within about an hour and a half of the start of the sale. Rather to my surprise, Geoff Wragg appeared and bought the horse with one bid. The horse was Dragon Dancer and I turned out to be wrong in my prediction, though only by half an inch, when he was beaten by Sir Percy."

Pearce served first as a club steward and then an honorary steward at the Hong Kong Jockey Club, where his father Thomas 'Tam' Pearce was chairman at the outbreak of war in 1941.

Engelbert-Bresges said: "John was present on many occasions to present the trophy for the race in his father's memory. We remember him well, and extend our condolences to his family and friends.

"He resided at the Mandarin Oriental for decades and absolutely loved going racing at Sha Tin."

FIRST PUBLISHED 6:25PM, JAN 18 2017
The horse was Dragon Dancer and I turned out to be wrong in my prediction, though only by half an inch, when he was beaten by Sir Percy