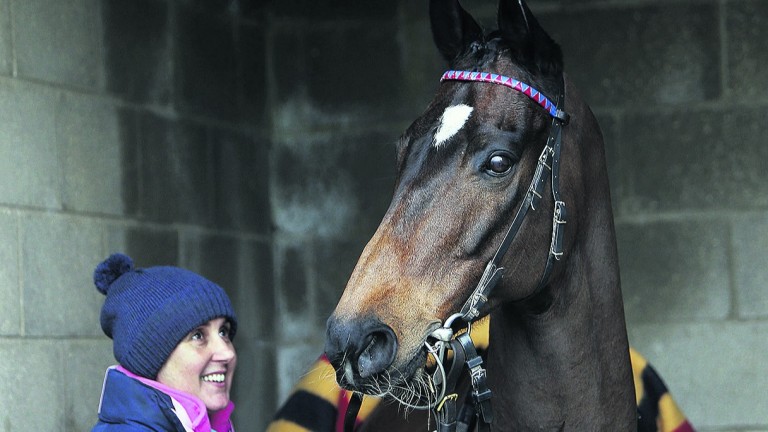 General Tufto joins a 100 club with a difference on Tuesday when the 11-year-old races for the 100th time at the same racecourse.

The chances are that the 11-year-old is the founding member of this particular club. Running for the 188th time, he first ran at Southwell on December 10, 2008, and over the intervening eight years has gone back 98 times to win 14 races at the Nottinghamshire venue.

General Tufto will be kicking down his stable door to get on the horsebox to make the 40-minute journey from the Wellingore yard of trainer Charles Smith in Lincolnshire.

"It's quite an achievement for the old boy to race there 100 times, and he loves going there," said Smith.

Neither Smith nor owner John Theaker was ruling out General Tufto rising to the occasion in the first division of the mile 0-55 handicap.

'He looks a picture'

"You never know with him," said Smith, who bought the then three-year-old out of Roger Charlton's stable for 4,000gns two years after the Hascombe Stud's homebred colt had failed to reach his reserve as a yearling with a bid of 200,000gns.

"We're hoping for a big run – his last two races he's run really well, last time from 9lb out of the handicap and staying on into sixth in a better race.

" I think he's as well as he's ever been – he looks a picture so we're keeping our fingers crossed."

In-running punters probably already know the tell-tale signs of what is coming in General Tufto's races.

Smith explained: "They can't go fast enough for him. If he's travelling for the first half-mile they aren't going fast enough in front – if he's off the bridle and chased along, that's what suits him.

Genera Tufto doing what he does best, winning at Southwell, back in 2010
MARTIN LYNCH
Smith, whose daughter Rebecca does everything with General Tufto at home and will be leading him up as usual at Southwell, continued: "He's a family pet and a pleasure to deal with. He's a moderate old horse and we know that, but to us he means the world."

The local postman will attest to that affection being felt much further afield.

Smith, who has sent out three winners this year, one short of last year's total, added: "He gets plenty of fan mail and receives parcels of apples and polos, not just from locals. There's a lady in Golders Green in London who sends him a parcel regularly."

General Tufto will have his usual fan club crowding around as he steps off his box and probably makes his dive for the track before being saddled, wanting to turn right on to the Fibresand rather than the saddling boxes to the left.

He has bragging rights

Not many older handicappers facing 11 rivals have run nearly as many times as all their rivals put together. In General Tufto's case today his 188 previous races is only nine fewer than all his rivals put together and, facing six maidens, he has bragging rights on the wins front, his 18 comparing to eight achieved by the other 11 combined.

Mark Clayton, executive director at Southwell, said: “General Tufto has become a cult hero for the racegoers here. He has a real strong legion of followers who'll back him every time he runs.

"Everyone here at Southwell is very proud to be playing a part in his achievements.”

The all-weather might not be everyone's cup of tea but, unsurprisingly for the amount of use it gets, whether on Fibresand, Polytrack or Tapeta, it brings horses back time and time again.

Western Command could be wondering what all the fuss is about as he racked up 127 races between 1998 and 2005 on the all-weather, but trainer Norma Macauley split the now 20-year-old's endeavours between Southwell and Wolverhampton.

Almaty Express made it to 91 runs at Wolverhampton for trainer John Weymes before his retirement aged 11 in 2013.

Elusive Warrior got to 88 at Southwell, with ten wins, before retiring two years ago, while General Tufto's year-younger stablemate Alpha Tauri, who is three races short of joining the 100 club, has run more than half his races at Southwell.

General Tufto may face a rival to his achievement as there is a mere six-year-old Shabra Emperor building his own reputation at Dundalk, still going strong after 53 visits.

. . . and a couple of interesting also-rans!