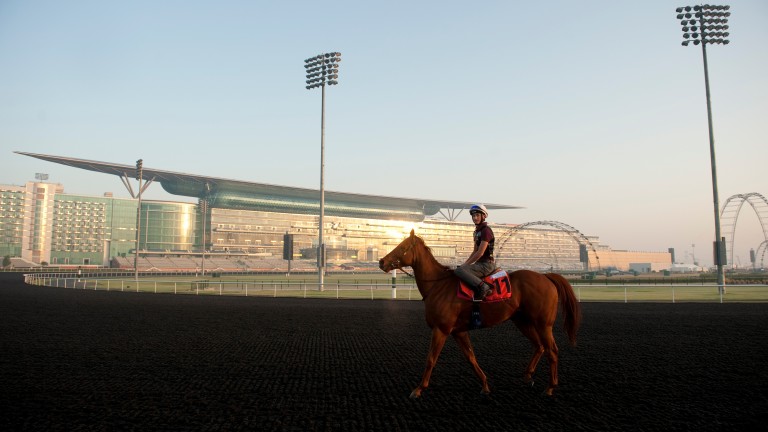 Given the proliferation of runners from Britain and Ireland in the 5f turf handicap at Meydan on Thursday, you could be forgiven for thinking you were looking at a Royal Ascot contest.

However, four of the nine British representatives in the field of 14 are course-and-distance winners, including Medicean Man, trained by Jeremy Gask and again ridden apprentice David Parkes.

The evergreen 11-year-old scored under Parkes two weeks ago for his third Meydan victory, having also won over 5f in 2014 before following up over six on the old Tapeta surface.

Gask said: “He's come out of his last race in great form and we're hoping for a big run, but we'd have been happier with a higher draw as stall one is probably not ideal.”

Medicean Man was drawn 12 of 13 when victorious last time, leading home a 1-2-3-4 for Britain completed by Sir Maximilian, Harry Hurricane and Line Of Reason, who all reoppose here.

There are 23 British and Irish runners on the card and Eddie Lynam runs Sole Power in Medicean Man's race and Moviesta in the Group 3 6f Al Shindagha Sprint. Ireland is also represented in that dirt dash by Wild Dude, who finished well ahead of Moviesta when third in the Listed Dubawi Stakes over course and distance three weeks ago.

Muarrab looks the one to beat here ridden by Jim Crowley for his boss Hamdan Al Maktoum.

In the second round of the 1m1½f Al Maktoum Challenge, Le Bernardin bids to follow up his first-round success under Tadhg O’Shea.

The UAE champion jockey said: “He's in great shape at home and does stay this trip but we've the worst possible draw, widest of all in nine.

“We might need some luck from there but the run should tell us where we should be aiming next – back to a mile or this kind of longer trip.”

Lindo Amor will have plenty of supporters having gone into many notebooks when staying on to be third behind Le Bernardin in the first round.

Trainer Mike de Kock said: “We were delighted with that run, his first for us. His best form in Argentina, at Group 1 level, was over ten furlongs so this trip should suit.”