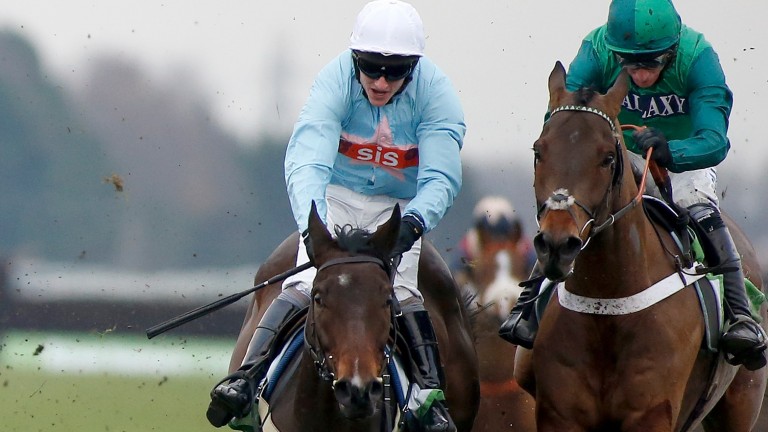 Clyne (left): one of two significant Betfair Hurdle market movers on Wednesday
Alan Crowhurst
1 of 1
By Richard Birch 10:18AM, FEB 9 2017

Song Light, third in the Greatwood Hurdle on his latest start in November, was on Wednesday a notable market mover for Saturday’s Betfair Hurdle at Newbury.

“He’s the plucky underdog who always runs well in these kind of races,” said James Mullins, assistant to his father. “He’s flying at home. All the signs are encouraging.”

Clyne, winner of four of his last five starts for Evan Williams, was also a mover on Wednesday, being cut generally into 5-1 (from 7) and challenging Ballyandy for favouritism. Betfair Sportsbook went the biggest price of 6-1.

Consul De Thaix drifted to 8-1 (from 11-2) and is a doubtful runner, according to owner JP McManus's racing manager Frank Berry, who had already identified Movewiththetimes - set to be ridden by Barry Geraghty - and De Name Escapes Me as intended runners.

Warren Greatrex, who will run Boite in the Betfair Hurdle with his son Tom taking 7lb off, is hoping his exciting five-year-old Western Ryder can follow in the hoofprints of Ballyandy by landing the Listed Betfair-backed bumper on the Newbury card.

Western Ryder created a fine impression when winning a similar race at Ascot in December by two lengths from Imperial Eloquence.

“He’s in serious form and the plan is to run at Newbury,” said Greatrex. “He has progressed again since Ascot and has the best form in the race. We’ll see on Saturday whether he’s up for the Weatherbys Champion Bumper at Cheltenham.”

Traffic Fluide, who has very low mileage after just six runs in Britain, was last seen at Ascot more than a year ago when he finished third to Un De Sceaux in the Grade 1 Clarence House Chase.

“He runs and I’m very happy with him,” said Moore. “He’s a very decent horse, and I certainly hope there’s more to come. He hasn’t had many races and is very well in on Saturday.”