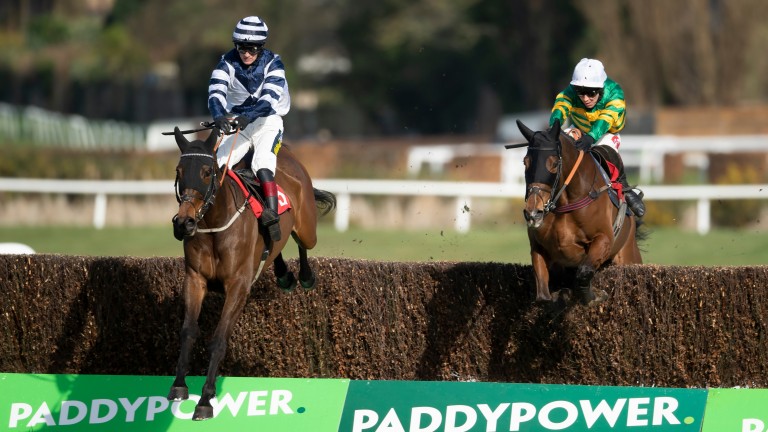 The race that replaced the Grand Military Gold Cup due to the current exclusion of amateur riders turned into a procession of its own when the gambled-on Grey Diamond powered home under Sam Twiston-Davies.

Backed from 7-1 in the morning into 3-1 at the off, the seven-year-old tracked a decent pace set by regular front-runner Antunes for most of the 2m novice handicap chase, which was run over a mile shorter than the race it replaced.

When the leader capitulated approaching the Pond fence, Grey Diamond took up the baton and powered up the hill to master Dostal Phil in a race in which three of the six runners were pulled up.

Winning trainer Sam Thomas said: "This looked the right race for Grey Diamond but I don't think we'll be overfacing him at present. We could look at Aintree or Perth for his next race or maybe even France. He'll be a nice horse next year."

Gillard in the pink with first double

Sandown kicked off its penultimate jumps meeting of the season with two replacement races, starting with a 2m hurdle for conditional jockeys in which Gericault Roque initiated the first double of Fergus Gillard's career. 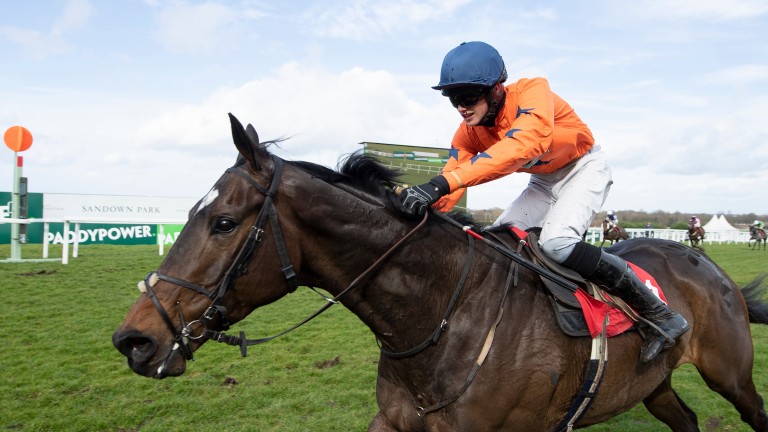 Not many jumps horses wear a red hood in the paddock but that certainly did the job settling the eventual winner, as did the lack of spectators at the track.

Anchored off a generous early pace by 5lb claimer Gillard, Gericault Roque came through to take command after the second-last.

Gillard, who is attached to David Pipe, said: "He had the hood off in the race today but they went a decent clip which helped him settle."

Gillard and Pipe bookended the meeting in similar style when Sexy Lot ran away with the closing 2m4f novice handicap hurdle. The double moved Gillard on to 20 winners for the season. He said: "It's days like this you live for and it's great to ride my first ever double at a Grade 1 track."

Richard Johnson may have been reeling from the loss of Thyme Hill from his book of rides at Cheltenham a few hours earlier but you would not have known it judging from the way he steered Orbys Legend to success in the 2m novice hurdle.

Nicky Henderson has a tremendous record in the race and he looked set to add to it when favourite Lecale's Article showed ahead turning for home, but a mistake at the second-last cost him dear.

The winner is owned by one of the jumping syndicates of Highclere Thoroughbred Racing, which is an emerging side of the Flat-driven operation run by Harry Herbert.

He said: "Orbys Legend did that nicely and he could go further next time but is very much a chaser in the making. The owners have been very supportive even though they can't yet go racing. I dare say there would have been a nice picnic in the car park during normal times."