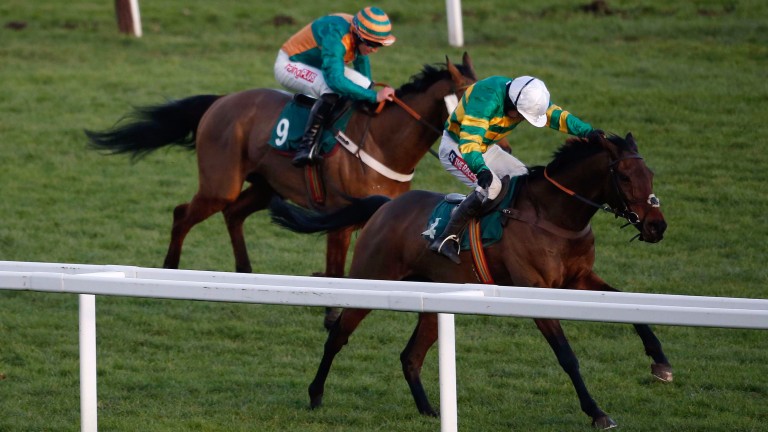 Unowhatimeanharry stays on too strongly for Cole Harden to win the Cleeve Hurdle at Cheltenham
Alan Crowhurst/Getty Images
1 of 1
By Stuart Riley 3:44PM, JAN 29 2017

Harry Fry has prepared a defending champion for one of the Cheltenham Festival's four feature championships, yet the rising star of the training ranks is certain preparing Unowhatimeanharry to justify favouritism in the Sun Bets Stayers' Hurdle represents the biggest challenge of his short career.

Unowhatimeanharry heads to Cheltenham on the back of an eighth consecutive win in Saturday's Cleeve Hurdle and is the 15-8 favourite with Sky Bet and Betfair to follow up at the festival.

"It's undoubtedly the biggest moment of my career," said Fry. "We were very lucky in our first season to have Rock On Ruby finish second in a Champion Hurdle as the defending champion, but Hurricane Fly was around then and here we'll be going to the festival with the favourite for a championship race.

"I'm not a bookmaker so the price is not my worry. All I'm concerned about is getting him to the track in the best form possible to do himself justice. The Cleeve's been a good stepping stone in the past so hopefully that can be the case again."

Fry also reported the nine-year-old had come out of his one and three-quarter length success on good terms.

"He ate up and was fine this morning, which is what's most important - and especially poignant after what happened to poor Many Clouds yesterday," said Fry.

"My heart goes out to Trevor Hemmings, Leighton Aspell, Oliver Sherwood and his entire team. He was a true credit to the sport, a fantastic racehorse and the sort anyone in racing would be overjoyed to be associated with, so it's very sad."

Fry wants slow ground if he is to run his star novice Neon Wolf, for whom the Neptune would be his preference, although the Supreme is also under consideration.

"We'll make a decision nearer the time," said Fry. "He's a hugely exciting horse and it's all ahead of him.

"It's all about what he does over fences in the years to come, but if it comes up slow I'd look forward to taking him there. At this stage I'd probably slightly favour the Neptune."

Ease in the ground is also on the wishlist for impressive recent Warwick winner American, who is being aimed at the RSA rather than the JT McNamara National Hunt Chase, which he also holds an entry for.

FIRST PUBLISHED 3:44PM, JAN 29 2017
I'm not a bookmaker so the price is not my worry. All I'm concerned about is getting him to the track in the best form possible to do himself justice