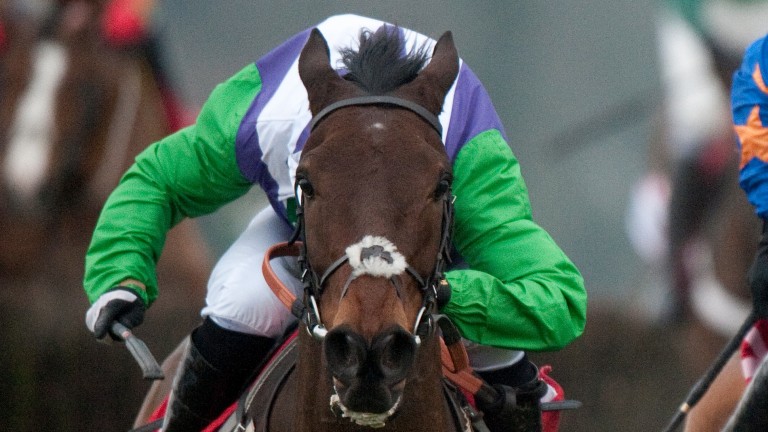 Harry Fry is entering a new chapter after Noel Fehily bowed out with a winner at Newbury on Saturday with the promising Get In The Queue, but reminders of days gone by remain.

The popular Opening Batsman has been a part of Fry's stable since October 2012, and has played a big part in his ascendance through the training ranks.

A memorable triumph came with Fehily aboard in what is now the Grade 3 888Sport Handicap Chase at Kempton in 2013.

The 2m4f handicap chase (3.15) at Wincanton could be the 13-year-old's final racecourse appearance, and Fry is hoping the veteran can get back into the winners' circle to see his career off in style

The trainer, who has stable stars Unowhatimeanharry, If The Cap Fits and Bags Groove on track for Aintree, said: "He's not getting any younger and has been going down in the weights. This will be his last season and it would be nice to get his head in front; if he were to win I think it would be the plan to retire him straight after.

"He's been a great servant for us over the years, especially when winning at Kempton, and he's given The Twelfth Man Partnership some great days."

A winner over course and distance in February 2015, Opening Batsman has finished third and fourth in these conditions on his last two starts, and will be making his ninth appearance at the course.

Fry added: "If he could bow out on a high that would be great, especially considering it's our local track."

Although down to a career-low mark, the nine-time winner looks set to have his work cut out with fellow course-and-distance winner Quite By Chance, the Charlie Longsdon-trained mare Nightfly and the eight-year-old Deauville Dancer all set to line up.

Morrison hoping sprightly Sleepy is on his best behaviour

Naming horses can be tricky, but effervescent dual-purpose performer Not So Sleepy has always lived up to his name according to trainer Hughie Morrison.

The seven-year-old registered a first victory over hurdles at Wincanton last month, and will bid to follow up in the 1m7½f novice handicap hurdle (4.15) over the same course and distance.

Not So Sleepy, who won the Listed Dee Stakes at Chester as a three-year-old, enjoyed a fruitful Flat campaign in 2018, headlined by a second-placed finish in the November Handicap at Doncaster.

Morrison, who is better known for training Flat horses but has enjoyed plenty of success with his jumpers, said: "Schooling him isn't a pleasurable experience as he likes to do everything quickly, but he did school well the other day.

"He's very wound up, but it's all for show else he wouldn't do so well on the racecourse. It's almost like he's pretending."

Explaining the decision to send Not So Sleepy over hurdles, the trainer added: "We'd been banging our head against the proverbial brick wall with him in handicaps and he isn't the type to retire.

"Beat Hollow is a good sire of jumpers and the owners didn't want to sell him. He's a strong horse and fairly sound."

Tate is hoping cheekpieces hold the key to Mirage

James Tate is hoping a switch of track and the addition of cheekpieces do the business for Distant Mirage in the 6f Ladbrokes-sponsored handicap (6.45) at Wolverhampton.

The topweight just got up to land a similar event over this trip at Kempton on her penultimate start, but then disappointed when third in her attempt to follow up at Lingfield earlier this month.

The daughter of Toronado is set to be ridden by David Allan and faces ten rivals, including Saturday's late Lingfield absentee Griggy.

Tate said: "Distant Mirage may not have handled the track at Lingfield last time but Oisin Murphy, who rode her that day, didn't think she was putting it all in, hence the cheekpieces.

"She's rated 71 but I had seen her as an 85-type horse so hopefully there is more to come."

Griggy, trained by John Butler, was taken out not long before racing at Lingfield at the weekend after being 'declared in error', a move which cost connections a fine of £500.

FIRST PUBLISHED 6:00PM, MAR 24 2019
He's very wound up, but it's all for show else he wouldn't do so well on the racecourse. It's almost like he's pretending