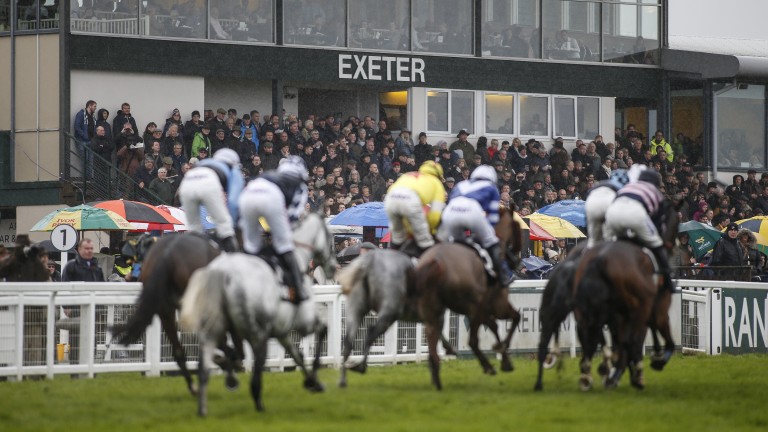 This afternoon's meeting at Exeter will go ahead after the track passed a third morning inspection.

Temperatures plummeted to well below zero at the track last night but officials' confidence that warmer conditions this morning would lead to the necessary thaw proved correct.

The ground is described as soft, good to soft (in places) for a seven-race card that gets under way at 1.10pm.

Naas has been forced to cancel its Grade 1 Lawlor's Of Naas Novice Hurdle fixture on Sunday, with the track described as "frozen solid" after an extremely cold spell across Ireland this week.

The disappointing news didn't come as a major surprise to the track, with plans already in place since Friday to ensure the fixture can be held on Wednesday.

Original entries will stand for all races with the exception of the top-level feature, which will revert to entries after forfeit.

Fresh declarations will need to be made by 10am on Monday, and the time of the first race on Wednesday will be 12.50pm.

Speaking via the IHRB's Twitter feed, clerk of the course Brendan Sheridan said: "We won't be racing tomorrow because the track is frozen solid.

"It got down to very low temperatures last night and, having spoken to Met Eireann, the temperatures aren't going to rise through tonight and tomorrow. The track is frozen and the meeting has been cancelled."

He added: "The meeting will now be scheduled for Wednesday, with further updates to follow as we go forward."

The meeting's original declarations had no shortage of star quality, with exciting novice hurdler Bob Olinger on course to face the Willie Mullins-trained Blue Lord in the €80,000 highlight.

There was also a cracking 2m novice chase in prospect, with potential Sporting Life Arkle contenders Captain Guinness, Energumene and Blackbow primed to lock horns ahead of next month's Dublin Racing Festival.

The IHRB also issued an update on this weekend's point-to-point action, with the course at Tinahely remaining unfit for racing at the Shillelagh & District fixture scheduled for Sunday. This meeting will now take place next Saturday.

The Muskerry fixture at Aghabullogue on Sunday has also been abandoned due to operational reasons and there are no plans to reschedule.

FIRST PUBLISHED 3:52PM, JAN 9 2021
Warmer conditions this morning have led to the necessary thaw for racing to go ahead