Frontiersman back in distance for Deauville adventure 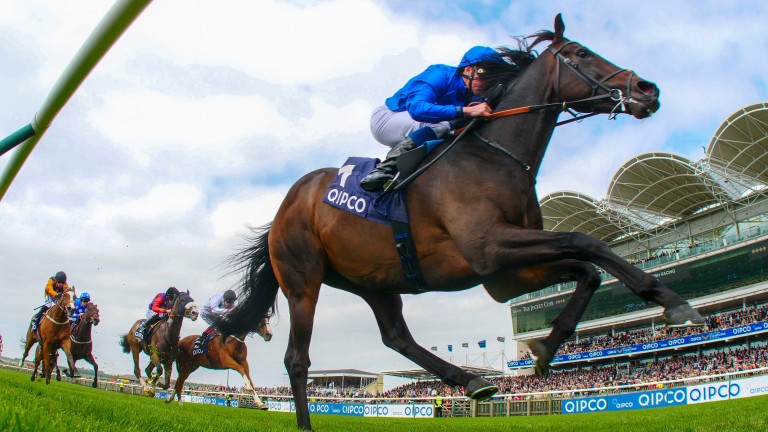 Eight days on from a disappointing run in the Geoffrey Freer Stakes at Newbury, Frontiersman heads back into more familiar territory aiming to finally deliver on the promise of his Coronation Cup second.

Godolphin trainer Charlie Appleby has decided an extended mile and five furlongs was a trip too far for the colt who is back over a mile and a half for the Group 2 Lucien Barriere Grand Prix de Deauville.

In June, Frontiersman, the half-brother to Derby winner Australia, stepped out of handicap company to chase home Highland Reel at Epsom and ran another solid race when edged out by stablemate Hawkbill in the Princess of Wales's Stakes.

He started second favourite for the Geoffrey Freer but after briefly hitting the front could finish only third, over four lengths behind Defoe.

Appleby said: "Hopefully, going back on a sound surface and back to around a mile and a half will suit him. It was a slow ground at Newbury and I think he might not have seen the trip out that day."

There are also two Group 3 prizes on the card, including the 6f Prix de Meautry Barriere in which the unbeaten Lahore takes a significant hike in class.

The colt began his career in March with victory in Doncaster maiden and then won a Windsor handicap last month on his only run since.

He will be up against Group 1 winner Signs Of Blessing, winner of last year's Prix Maurice de Gheest and fifth in the race this year, Group 3 winner Fas and the Fabre-trained Aiming For Rio, winner of his last three.

Lahore's trainer Roger Varian said: "This is a steep rise in class, but he's done nothing wrong and we'll get a better gauge of his ability here."

Fas finished last in the Maurice de Gheest on his first run since April and trainer Pia Brandt said: "He's been really well since the Maurice de Gheest, when he needed the race and I think was a bit surprised to be racing against top sprinters. I have thought for a while he might need blinkers and he's worked well in them."

Godolphin France racing manager Lisa-Jane Graffard said of Aiming For Rio: "She has shown herself to be very tough and consistent this year. She has stepped up on each of her performances and we have been looking for the right race to step her up again."

Graffard said: "Graphite is a making a mini-comeback, having not run since April. Hopefully, Sunday’s race will set him up for a nice autumn campaign, but we would just like to see him run a good race."

FIRST PUBLISHED 6:00PM, AUG 26 2017
It was a slow ground at Newbury and I think he might not have seen the trip out that day