Those closest to Don Cossack pay tribute to the star 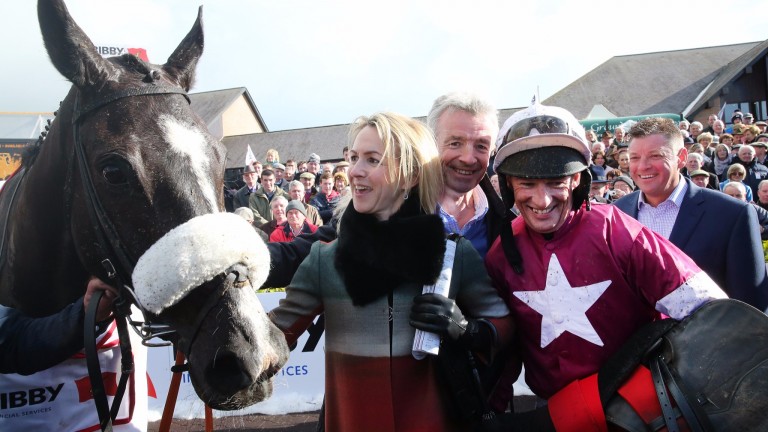 Paul Carberry, who won the 2015 Punchestown Gold Cup on Don Cossack
I rode him once and it wasn’t a bad time to get on him as he gave me my last Grade 1 win of my career in the Punchestown Gold Cup. I rode lots of good horses in my career but he was definitely up there with the best of them. After I won on him at Punchestown it probably confirmed to everybody that he stayed the Gold Cup trip and everyone started to dream about the Gold Cup for the following year.

Dessie Scahill, who called Don Cossack home for the majority of his wins
It is always sad to see any horse's career end prematurely and a lot of people had high hopes that he may have been able to defend his crown. It's a shame, as it would have been a marvelous race between Don Cossack and Thistlecrack. He struck me as a horse who would have been capable of winning two or three Gold Cups, but at least he realised his connections' dream and nobody can ever take his Gold Cup away.

Robbie McNamara, who rode Don Cossack on his racecourse debut at Punchestown in 2011
I rode Don Cossack in his first race on a racecourse and somehow managed to get him beat! He got loose before the start that day at Punchestown, to be fair to him, but he ran a nice race and he was just the most gorgeous horse to look at, even as a four-year-old. My earliest memories of Don Cossack were when Eddie Hales brought me to have a look at him in his stable. Eddie was absolutely mad about him, and as time has gone by the horse has proved him right. It’s always upsetting when a horse is forced to retire due to injury but he has gone on and fulfilled his potential and achieved what 99.9 per cent of other horses don’t. He was a real superstar for connections and did Gordon Elliott and Bryan Cooper proud.

Ciaran Murphy, who did most of the recuperation with Don Cossack this summer
He was just a gentleman to deal with here at Charlestown Stud and it’s just a shame he didn’t make it back. We did lots of roadwork and flatwork with him while he was recuperating and we thought he would make it. Connections have made the right decision for the horse and he will get a fantastic retirement in Gigginstown House Stud alongside War Of Attrition and company.

Nina Carberry, who won three bumpers on Don Cossack
He won three bumpers for me and it was fantastic to see him go on and achieve all that he did. Even as a four-year-old he was a fantastic big imposing sort and never really looked weak. He was one of the best I have ridden.

Eddie Hales, who sold Don Cossack to Gigginstown
Kevin Power rode him for me in a schooling bumper and when he got off him he just said 'this is the real deal'. From the moment he walked into our yard we knew he had it. I swear to you, the one season Gordon had him fully developed and matured, he went and won the Gold Cup. It’s such a pity as I think he was just approaching top gear in his career. That’s horses, though, and now we will try to find the next Don Cossack. It will be a very hard thing to do but we will keep trying.

FIRST PUBLISHED 3:40PM, JAN 11 2017
I rode lots of good horses in my career but he was definitely up there with the best of them