From the Galway Plate to Yeats: awesome O'Brien show rolls on 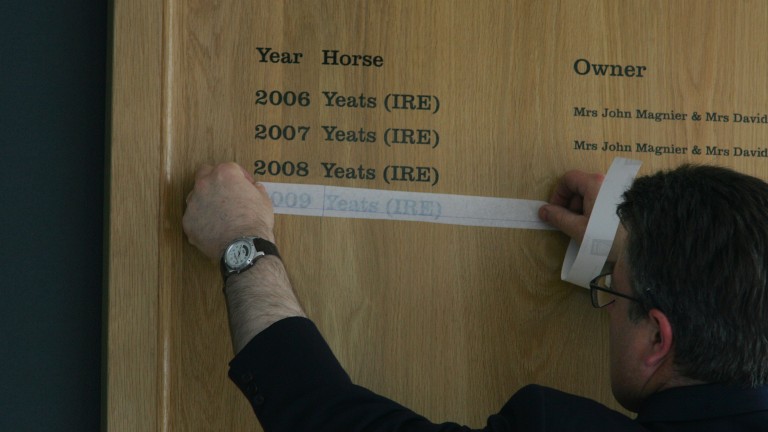 When Saxon Warrior landed the Racing Post Trophy at Doncaster it meant Aidan O'Brien had set a new record for Group/Grade 1 wins in a year, overtaking US great Bobby Frankel, who saddled 25 in 2003. We take a look at some of O'Brien's other achievements. . .

No trainer has saddled more than O'Brien, who secured this milestone across both Flat and NH codes in June when Highland Reel outpointed Decorated Knight and Ulysses in the Prince of Wales's Stakes at Royal Ascot.

O'Brien, of course, had to surpass someone to become the most prolific top-level trainer and that man was Australian legend TJ Smith, whom the Ballydoyle maestro overhauled in 2016 thanks, again, to Highland Reel in the King George VI and Queen Elizabeth Stakes. Unsurprisingly, the Coolmore cashpoint is the highest money earner O'Brien has trained.

Australia's victory in the 2014 Derby – following on from Ruler Of The World and Camelot – meant O'Brien became the first man to win the Epsom Classic three times in a row since its inception in 1780.

O'Brien might not be one for personal achievements, but surely he will never forget being at Chantilly on the first Sunday of October in 2016 when Found led home stablemates Highland Reel and Order Of St George for a barely believable 1-2-3 in arguably the world's greatest race. That was an achievement that drew parallels with Frankie Dettori's magnificent seven and Michael Dickinson's famous five in the Cheltenham Gold Cup.

It is not just the Arc and Irish Derby O'Brien has had clean sweeps in, excelling in last year's 1,000 Guineas, the 2007 Irish Champion Stakes and the Galway Plate in 1995, when the thought of Flat supremacy may have seemed some way off.

No-one has enjoyed more Gold Cup success than O'Brien, who stands on seven, largely thanks to priming the mighty entire Yeats for four years in a row from 2006-2009. As a result, eight top trainer titles at Royal Ascot have made their way back to Ballydoyle.

Royal Ascot is not the only high-profile Flat meeting O'Brien has been a force at – his 11 victories at the Breeders' Cup put him behind US racing royalty D Wayne Lukas and Bob Baffert as the fixture's leading operators.

A born winner who embodies spirit of Ballydoyle