From Balmerino to Sakhee: Dunlop's most notable horses 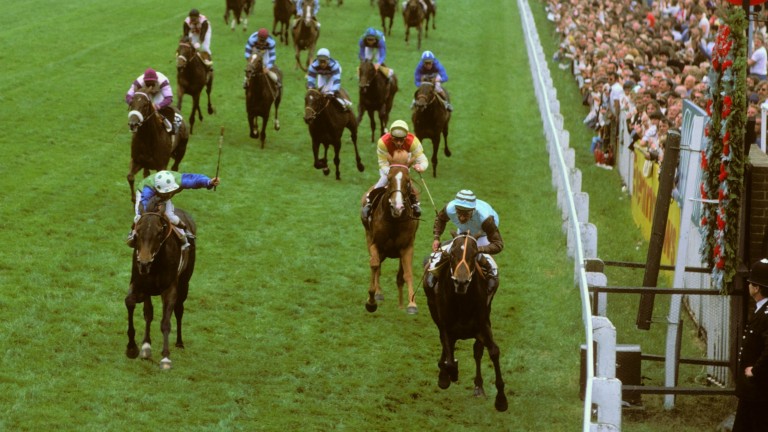 An outstanding champion in New Zealand and Australia, Balmerino never won a Pattern race for Dunlop but his second place in the 1977 Prix de l’Arc de Triomphe was arguably the best single performance by any horse he trained.

This globetrotter won 14 of his 18 races as a three-year-old, including the New Zealand 2,000 Guineas and Derby in 1975. He also took the Brisbane Cup and Air New Zealand Stakes.

He arrived at Arundel from California in August 1977, and in his first two races for Dunlop won the Valdoe Stakes at Goodwood and proved himself Europe’s champion older horse with a fast-finishing second behind the great Alleged in the Arc.

Balmerino then finished first in the Group 1 Gran Premio del Jockey Club but was demoted to second for causing interference. In 1978 he won the Clive Graham Stakes at Goodwood and was second in the Coronation Cup and Eclipse.

This dual Derby hero was one of the toughest as well as classiest winners of Dunlop’s career, gaining both his Classic victories by a head.

Home-bred by the Earl of Halifax, Shirley Heights won the Royal Lodge Stakes as a two-year-old and the Dante Stakes in the spring of 1978.

In the Derby he seemed to have an impossible task two furlongs out, but he had the good luck to find a clear run after Greville Starkey switched him to the rails, and produced a tremendous burst to catch Hawaiian Sound in the last couple of strides. In the Irish Derby he scored narrowly from Exdirectory and Hawaiian Sound.

The son of Mill Reef was injured after the Irish Derby and never ran again. He was rated below King George winner Ile De Bourbon, whom he had beaten at Newmarket in May.

Shirley Heights proved the most successful of all Dunlop’s horses at stud, surpassing Pitcairn, Efisio, Bahri and Sakhee.

Perhaps the best champion of either sex Dunlop ever had, Habibti disputes with her sixth dam Mumtaz Mahal the distinction of being the fastest filly ever trained in Britain.

Having won the Lowther and Moyglare Stud Stakes as a two-year-old, and come third in the 1,000 Guineas and ninth in the Irish 1,000 Guineas in 1983, she proved a flying machine in her last four races that season.

Habibti was the decisive winner of the July Cup and Sprint Championship (as the Nunthorpe was called that year), delivered an awesome performance with a seven-length victory in the Haydock Sprint Cup, and followed up in the Prix de l’Abbaye. In all four of those triumphs her jockey was Willie Carson and her closest pursuer was popular favourite Soba.

Habitat’s daughter was not as dominant as a four-year-old but still won the King’s Stand Stakes.

The only one of Dunlop’s horses to win five Group 1 races, Salsabil landed the Prix Marcel Boussac at two and became a special filly in 1990 by achieving a unique four-timer in the 1,000 Guineas, Oaks (by five lengths), Irish Derby and Prix Vermeille.

Hamdan Al Maktoum’s daughter of Sadler’s Wells, ridden by Willie Carson, was the first filly to win the Irish Derby for 90 years, although very few of her sex had run in the race. She was a late withdrawal from the King George, disappointed when favourite for the Arc on her final appearance, and was not clearly the champion three-year-old filly – In The Groove also had strong claims to the title.

Dunlop said: “She doesn’t like being cosseted, and if you make a fuss of her in her box she’s quite likely to take a lump out of you.”

The best horse to pass through Dunlop’s hands, Sakhee was a Derby runner-up and dual Pattern winner during his time at Arundel, and became a great champion after being transferred to Godolphin.

His parents, Bahri and Thawakib (Ribblesdale Stakes), were big-race winners for Dunlop, and in 2000 Hamdan Al Maktoum’s colt won the Sandown Classic Trial and Dante Stakes, and came second in the Derby.

At Epsom he led over three furlongs out but was caught in the last 100 yards and beaten a length by Sinndar. They pulled well clear of their rivals, and were among the best pairs of colts ever to come first and second in the Derby.

As a four-year-old, for Godolphin and trainer Saeed Bin Suroor, Sakhee proved a giant of the turf with victories in the Juddmonte International by seven lengths and the Prix de l’Arc de Triomphe by a record-equalling six lengths.

The most notorious horse of Dunlop’s career was one who never even raced – Snaafi Dancer, who fetched a world record sum as a yearling in 1983, at the height of the Keeneland sales bubble, and became a laughing stock.

The son of Northern Dancer cost Sheikh Mohammed $10.2 million after a bidding duel with Robert Sangster, but proved so slow on the Arundel gallops that a racecourse venture would have resulted in certain embarrassment.

Dunlop said of him: “Rather a sweet little horse actually, but unfortunately no bloody good . . . After his first winter Snaafi Dancer really was bitterly disappointing. The writing was on the wall by spring.” Jeremy Noseda, his assistant, stated: “The older he got, the worse-looking he got. In fact even when he arrived he didn’t look that good. And by spring he was a horrible-looking brute.”

At stud in Canada he got only a few mares in foal.

FIRST PUBLISHED 2:05PM, JUL 7 2018
Dunlop said of him: rather a sweet little horse actually, but unfortunately no bloody good