From Arkle to Coneygree - six greats to land ultimate prize 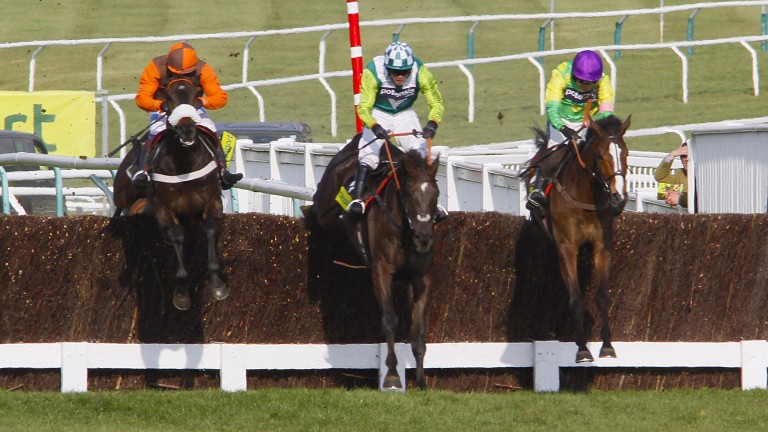 The middle of Arkle's three Gold Cup triumphs, for which he was sent off the 3-10 favourite. He dished out a 20-length drubbing to Mill House, the same rival he had defeated the year before when avenging his defeat in the 1963 Hennessy Gold Cup.

A year later, he went off at an astonishing 1-10 and the horse described as a freak of nature by Sir Peter O'Sullevan now takes pride of place overlooking the parade ring at Cheltenham in statue form.

Being a mare and the only horse to complete the Champion Hurdle and Gold Cup double, Dawn Run's 1986 success would have been historic enough in itself.

As it turned out, her win came in one of the most thrilling finishes the race has produced, with Jonjo O'Neill coming up trumps with a ride defined by sheer determination. For a moment, it looked like Wayward Lad had done enough but then, as Sir Peter O'Sullevan cried: "The mare's beginning to get up", Dawn Run entered racing folklore.

There is Arkle and there is Best Mate. Only two horses have won three consecutive Gold Cups and in 2004 Best Mate wrote his name into immortality.

Plenty knock the form of all three wins, but subsequent years have shown this was a victory of longevity for trainer Henrietta Knight. Just a look at this year's festival absentees shows what an achievement simply lining up three years in a row was, let alone winning it.

Rarely does racing garner genuine interest from the general public outside of the Grand National but when superstar stablemates Denman and Kauto Star locked horns in 2008, seemingly everybody in Britain and Ireland had picked a side.

The reigning champion Kauto Star was sent off the 10-11 favourite but Denman, under Sam Thomas, put up an awesome display to win by an astonishing seven lengths. Subsequent Grand National hero Neptune Collenges took third for good measure to complete a wonderful afternoon for trainer Paul Nicholls.

One of the greatest racing images of all time is that of the grand old warriors Kauto Star and Denman in the air simultaneously with new kid on the block Long Run as they battled for supremacy in 2011.

Then aged just six, Long Run found plenty up the hill under his amateur rider Sam Waley-Cohen to overcome his 11-year-old rivals in a victory that had the unmistakable feeling of marking the end of a glorious era for staying chasers.

'Gather ye rosebuds while ye may,' wrote the poet Robert Herrick, a sentiment that perhaps inspired the Bradstocks to forgo the RSA Chase and go for Gold Cup glory with their talented but fragile novice Coneygree two years ago.

Partnered by Nico de Boiville, Coneygree made virtually every yard of the running, jumping spectacularly to defeat a field that featured the first five home from the year before and become the first novice since 1974 to win the race.

FIRST PUBLISHED 12:38PM, MAR 17 2017
Her win came in one of the most thrilling finishes the race has produced, with Jonjo O'Neill coming up trumps with a ride defined by sheer determinati