Top of the charts: the races with the biggest betting turnover at the festival 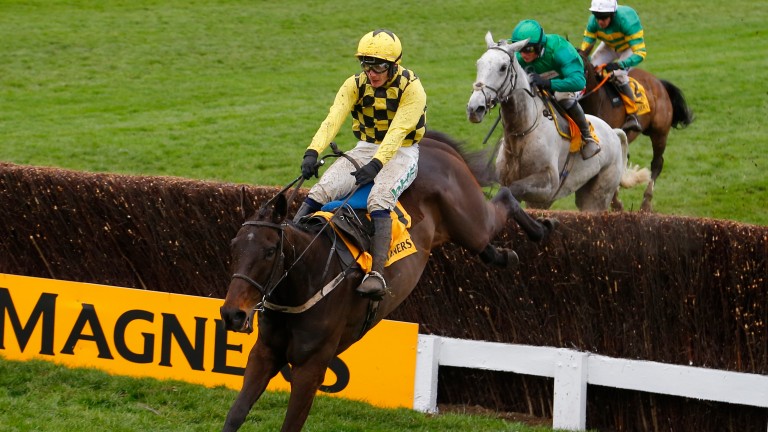 Al Boum Photo on the way to winning the Cheltenham Gold Cup, still the undisputed number one turnover race with Ladbrokes Coral at the festival
Mark Cranham
1 of 1
By Bruce Jackson UPDATED 5:13PM, MAR 17 2019

It was a case of 'that Friday feeling' for Cheltenham Festival punters, with turnover figures released on Sunday for Ladbrokes and Coral shops underlining the huge popularity of the final afternoon of the four-day meeting.

All seven of Friday's races appear in the top ten of the 28 races run at Cheltenham, with the Gold Cup retaining its undisputed number one spot. 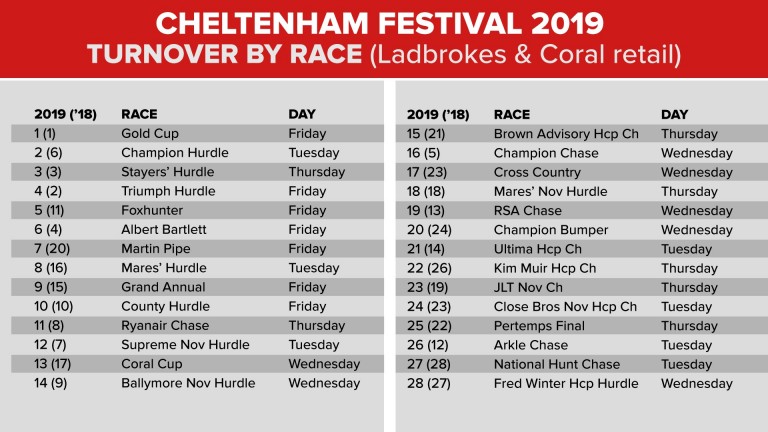 The switch of the Martin Pipe Conditional Jockeys' Handicap Hurdle to the getting-out stakes, replacing the Grand Annual as the last race of the festival, led to it rocketing to seventh in the turnover table, having languished in 20th last year.

The Grand Annual, which preceded it, rose in the ranks to ninth from 15th despite, like the Martin Pipe, not being shown on ITV, while the Foxhunter Chase rose six places to fifth spot.

Simon Clare, Ladbrokes Coral PR director, said: "The significant upturn in betting turnover on Gold Cup day compared to the first three days of the festival is evidenced by all seven Friday races featuring in the top ten betting races of the festival, including two non-ITV televised contests.

"This trend is consistent with previous years, as a new recreational betting audience traditionally joins in on Gold Cup day to complement those that bet across all four days. However, the punter-friendly results on Thursday will also have swelled punters' betting coffers, which fuelled even greater betting activity on the final day."

Clare added: "The Foxhunter's rise to fifth from 11th is even more remarkable given how few of the jockeys and horses regular punters would be familiar with, yet just by following the biggest betting race of the meeting punters still get fully involved in the race in their droves."

Altior, who went off at 4-11, was blamed for the Champion Chase plummeting in the table to 16th having been fifth last year, when Nicky Henderson's star chaser took on the same number of rivals but had started even money.

Clare added: “The Champion Chase was a poor betting performer this year, with Altior sent off at such prohibitive odds. As a result the Coral Cup proved the biggest betting event on the Wednesday, which may be the first time a handicap has been the best betting race on a festival day."

Punters seemingly followed the females as the Emma Lavelle-trained Stayers' Hurdle winner Paisley Park and Frodon, partnered to Ryanair victory by Bryony Frost, were the two worst results of the meeting for Ladbrokes Coral on a dismal Thursday.

Clare said: "Thursday saw our worst festival daily losses since Best Mate won his third Gold Cup, but then Friday swung massively back in our favour, delivering one of the best days in recent history anchored around a very bookie-friendly result in the Gold Cup won by Al Boum Photo."

FIRST PUBLISHED 4:25PM, MAR 17 2019
The Champion Chase was a poor betting performer this year falling to 16th from fifth with Altior sent off such prohibitive odds