'The Commonwealth is the plan, assuming we're allowed to travel over for it' 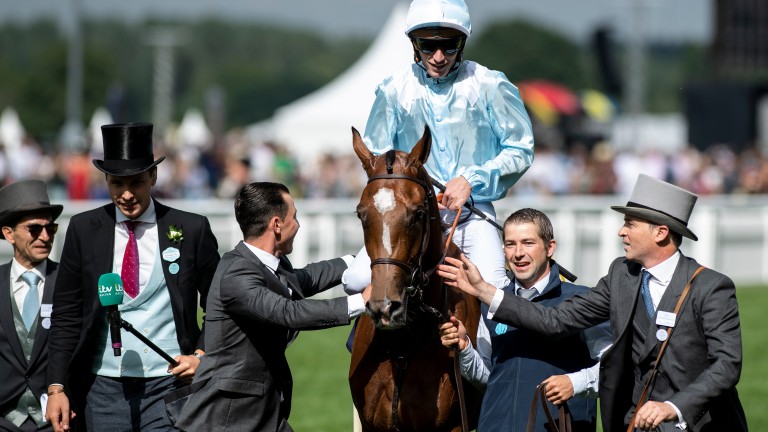 Francis Graffard (right) trained his first British Group 1 winner with Watch Me at Royal Ascot last year and is eager to return if conditions allow
Edward Whitaker
1 of 1
By Scott Burton UPDATED 1:51PM, MAY 19 2020

Francis Graffard is hoping that France's headstart over Britain and Ireland in the reopening of racing operations can bear fruit as he formulates his squad for Royal Ascot.

The meeting is scheduled to start just 16 days after the planned British resumption and Wooded, an impressive winner of the Group 3 Prix Texanita, and Plumatic, who made a pleasing first start for Graffard when second at Chantilly on Monday would have race-fitness on their side, assuming the meeting is open to foreign-trained runners.

Plumatic was bought out of Andre Fabre's yard at the end of last season to race in the colours of Australian owner Gerard Ryan.

A former winner of Salisbury's Sovereign Stakes, Plumatic cruised into contention in the Prix Bertrand du Breil but was unable to produce a second burst of acceleration and had to settle for second behind the impressive Pretreville.

"He ran very well because it is not at all easy to make up ground from behind on fast ground like that," said Graffard. "He got almost too good a run into the straight and Christophe felt he probably got going to soon. He just cracked a little late on but he is a six-year-old and he was a bit rusty."

A rematch with the winner in the Prix Muguet at Saint-Cloud on June 28 is a possibility, though Graffard admits he is tempted by the Queen Anne Stakes.

"He has taken the race well and I'm very satisfied," said Graffard, who registered his first British Group 1 when Watch Me took the Coronation Stakes at Ascot last June. "There is the Muguet here in France but we'll also look at how the Queen Anne Stakes is shaping up at Ascot."

Wooded put daylight between himself and his rivals in the Prix Texanita, confirming himself a three-year-old sprinter to be reckoned with.

"The Commonwealth is the plan for him, assuming it goes ahead and we are allowed to travel over for it," said Graffard.

Wooded is a 12-1 chance with William Hill and Coral in a race where Pierre Lapin is vying for favouritism with the currently sidelined Earthlight.

FIRST PUBLISHED 1:49PM, MAY 19 2020
There is the Muguet here in France but we'll also look at how the Queen Anne Stakes is shaping up at Ascot