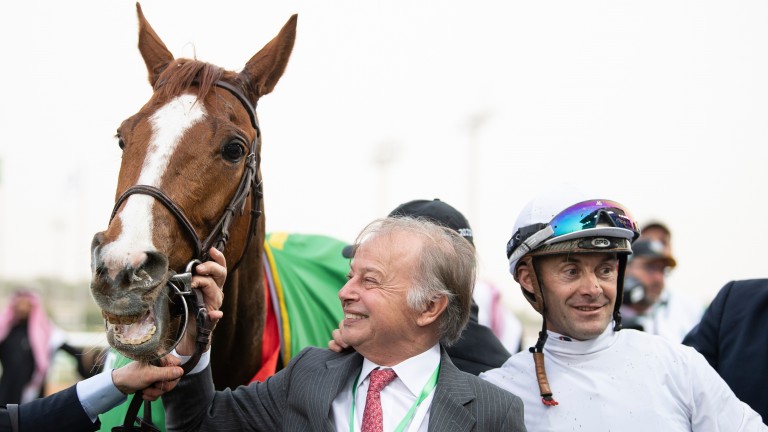 Call The Wind with a delighted Freddy Head and Olivier Peslier after success in Saudi Arabia in February
Edward Whitaker (racingpost.com/photos)
1 of 1
By Scott Burton UPDATED 5:47PM, MAY 24 2020

Call The Wind produced a performance of class and determination to get the better of Holdthasigreen under a perfectly judged ride from Olivier Peslier to land the Group 3 Prix de Barbeville.

It was a performance worthy of note since most of Europe's top Flat horses have been distinctly underemployed this spring, Call The Wind has already completed two trips to the Middle East, most recently for the abandoned Dubai World Cup meeting.

Tony Piccone set out to dictate a steady pace aboard Holdthasigreen but Peslier was alive to the danger and racheted up the pressure on the turn for home, before attacking half way up the short Deauville straight.

"I wanted to hide him away but we barely went a hack canter and he is a horse with a great long stride on him, so I decided to help him relax by letting him move forward," said Peslier. "I didn't want to get caught for a turn of foot and it's hard for staying horses when a race turns into a sprint.

"He won today but he probably didn't show the same class as last time [in Riyadh]. Today he found it harder."

Trainer Freddy Head has always been somewhat reluctant to send Call The Wind to Ascot for the Gold Cup but, with Britain and Ireland's top stayers all forced to run in the toughest staying test in the calendar without a prep run, said he will at least discuss the option with owner-breeder George Strawbridge.

"He is a formidable horse who is always involved in the finish, and wonderful for a trainer to be involved with," said Head. "The race didn't play to his strengths today as he prefers to come from behind off a strong pace. Today they only raced for the last 1,000 metres [five furlongs].

"I don't know about the Gold Cup, we'll have to see. I've always been slightly nervous of it for him but I'll think about it and will talk to George as well. There is also the Group 2 [Prix Vicomtesse Vigier back at Deauville."

Holdthasigreen showed no signs that he is over the hill at eight and produced a fine effort in attempting to give 7lb to the winner.

"It was a very nice comeback run and itwas a good battle between two good horses," said traner Bruno Audouin. "We'll perhaps look at the Vicomtesse Vigier in the middle of June next."

FIRST PUBLISHED 5:23PM, MAY 24 2020
The race didn't play to his strengths today as he prefers to come from behind off a strong pace. Today they only raced for the last 1,000 metres

Suesa sparks Ascot dreams for Rohaut and Peslier as Ubettabelieveit disappoints Top stayer Subjectivist set for Stradivarius battle next in Ascot Gold Cup 'He was such fun' - racing pays tribute to Prince Philip, the Duke of Edinburgh