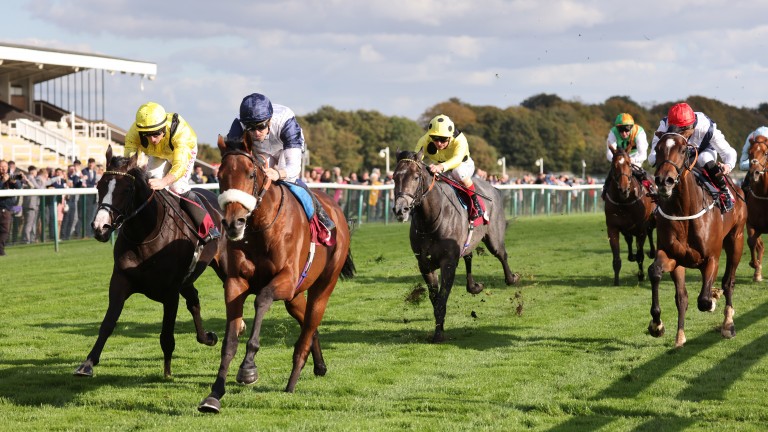 Kevin Ryan's patient approach with Franz paid off when the two-year-old newcomer made the perfect start in division one of the mile novice contest.

Bought for 100,000gns as a yearling, Franz was making his first start at this late stage of the season and defied his inexperience with a half-length success under Kevin Stott, who recorded winner number 83 of his best season.

Ryan was also responsible for the only other debutant in the field in Ravenswing and also drew encouragement from his fourth-placed finish.

"They've been slow-burners – we've given them plenty of time – and it's great to see them run so well," said the trainer.

"Franz is a horse we've liked all year but had to be patient with. He was always going to be a three-year-old, more so than a two-year-old, and it's nice to get a run into him."

The second division was won by 4-9 shot Magisterial, who built on the promise of his debut fourth at Newmarket last month.

Sky Blue the colour for Crouch

Hector Crouch was impressed with the way Sky Blue Pink picked up to win the 6f fillies' novice under a penalty.

The Ralph Beckett-trained two-year-old faced different ground conditions from her victory at Kempton last month and warmed to her task well.

"I thought I was in trouble after a few furlongs as she never travelled," said Crouch. "To pick up like she did with the penalty, I'm very impressed with her. She probably wants better ground and a step up in trip."

There was a minute's silence before racing in memory of legendary jumps owner Trevor Hemmings, who died on Monday at the age of 86.

Tributes will continue in the north-west at Preston North End on Saturday when tickets will cost £5 and all gate receipts will be donated to charities supported by the club's late owner.