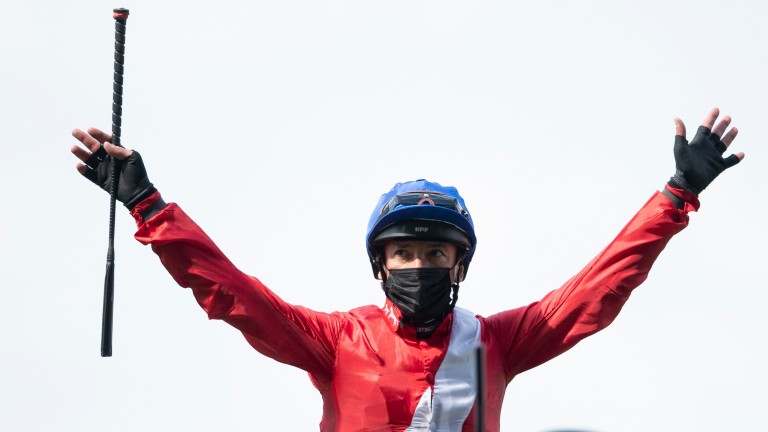 Frankie Dettori saluted the crowd after celebrating his 75th Royal Ascot winner aboard Indie Angel in the Group 2 Duke of Cambridge Stakes, as the veteran rider delivered another masterclass in the saddle.

It may have been his 75th success but victory was no less special for Dettori, who drew on every ounce of his big-race know-how to guide Indie Angel along the road less travelled up the stands' side rail while more fancied runners were sent up the middle of the track. 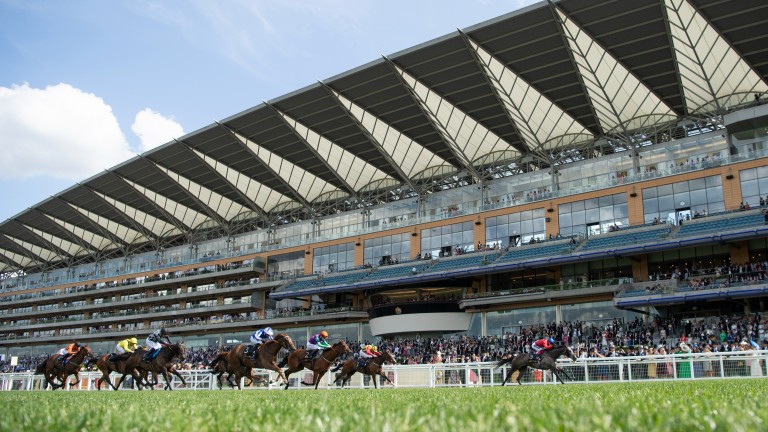 The four-year-old took full advantage of the opening when powering two and a half lengths clear of Lady Bowthorpe and the favourite Queen Power, who were separated by a short head at the line, to provide her owners with an unprecedented fifth success in the race.

The jockey executed his plan to perfection on the track but was nonetheless surprised by Indie Angel's performance, given her struggles in two starts this season at Lingfield and Newmarket.

"I'll be honest with you, that was unexpected," said Dettori, whose over-enthusiastic celebrations resulted in the bottom of the trophy being temporarily dislodged. "She's got ability but everything has to fall right for her. She needs cover, a fast pace and plenty of room.

"She was too free with me at Newmarket last time so I didn't know what to expect but today was a good day and she just took off."

This was another good day in what has proved a good week for the jockey and trainers John and Thady Gosden, who struck with Palace Pier on the opening day and team up with Stradivarius on Thursday. 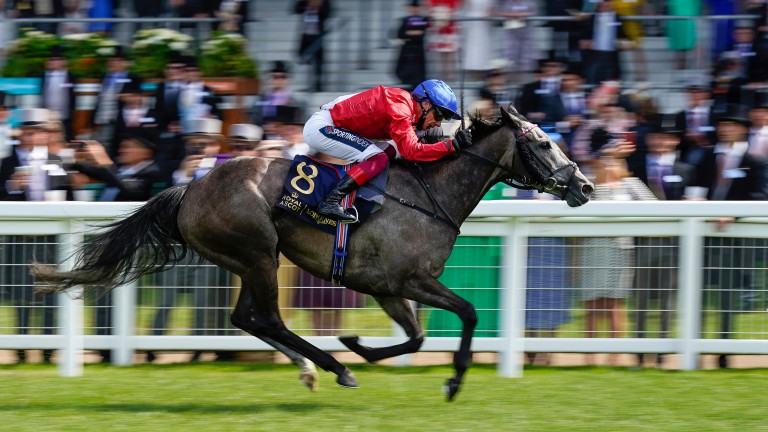 "In fairness, she won well at Lingfield at the back end of last season and it just went a little wrong," said Gosden. "I probably ran her a little early in the spring before she began to come to herself.

"She had a little complication in her last race but we knew she could be competitive against the top fillies. Still, it would have been wishful thinking to say that she'd win by two and a half lengths but she relaxed beautifully and looked a different filly from her last run."

The trainer suggested Indie Angel could take a similar route to last year's winner Nazeef, who landed the Group 1 Falmouth Stakes on her next start for Gosden before striking in the Sun Chariot Stakes.

"You've got to look forward," said Gosden, who drew level alongside Sir Michael Stoute with his fourth win in the race. "She's won a Group 2 so maybe you start trying to climb even higher up the ladder. There are some nice races for her like the Sun Chariot and the Falmouth Stakes at the July meeting.

"Those are possibilities but we're trying to savour this as we did not necessarily think she'd win like that with two lovely fillies in behind."

Groom Viktor Konya, whose red suit matched the distinctive silks of the winning owners Cheveley Park Stud, could not hold back the tears and stole the post-race show after watching the 22-1 shot spring a minor surprise .

"It's amazing," the groom told ITV Racing. "I'm still in shock and I don't know what to say right now. I'm so happy with this horse and I'm so grateful to be around her every day. This is the best feeling."

The runners were fanned out across the track approaching the final furlong and there was little to split the first five home at the line, with Champers Elysees finishing best of the Irish-trained runners in fourth, three-quarters ahead of Lavender's Blue, who is owned by ABBA legend Benny Andersson.

'From three-mile stayers to five furlongs at Royal Ascot, Gavin can train them'

Charlie Appleby and Frankie Dettori chase more Canadian riches at Woodbine Mishriff to skip Arc bid in favour of second tilt at the Champion Stakes Options abroad possible for Ville De Grace after stylish Listed-race success 'This win is for him' - Joanna Mason picks up double on poignant day John and Thady Gosden: 'It's no different to managing a top footballer' Think 'trainer form' and everything becomes clear after hectic weekend's action