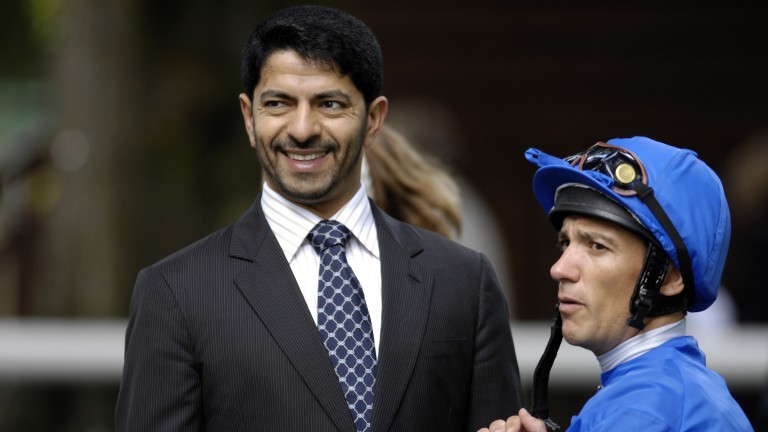 Frankie Dettori and Saeed Bin Suroor during their glory days for Godolphin: the pair are now reunited again at Royal Ascot
Edward Whitaker
1 of 1
By David Milnes UPDATED 8:29PM, JUN 17 2020

Frankie Dettori has his first ride for Saeed bin Suroor in eight years on topweight Dubai Love, but a victorious reconciliation won't be easy as the Night Of Thunder filly must concede no less than 21lb to hot favourite African Dream.

Dettori was replaced as Godolphin number-one by Silvestre de Sousa in 2013, but he recently wore the famous blue silks when winning a Group 2 at Newmarket on Terebellum for his boss John Gosden.

Bin Suroor said: "Everyone in the stable is very happy that Frankie is back riding for us again. He's been my friend for the past 18 years and we have been around the world and back again together over the years. It will be just like old times when I meet him in the paddock, and he's still the best jockey in the world.

"Dubai Love is a nice filly and hopefully Frankie can have a nice first ride back for us. Hopefully we can use him again when he is available and it will be great to see him back in the blue colours of Godolphin again."

At the other end of the handicap from Dubai Love, one of the bottomweights, African Dream, is all the rage as she is due to go up 16lb in future handicaps after finishing a close second to the 106-rated Stylistique at Newbury last Friday.

Saeed bin Suroor, trainer of Dubai Love
She ran well in Dubai where she won the UAE 1,000 Guineas and was second in the Oaks. Although that was on dirt, we know she handles some give in the ground and she has worked nicely on the watered gallop of late.

Simon Crisford, co-trainer of Night Colours and Festive Star
Night Colours will appreciate any cut in the ground and has moved forward from her debut, while Festive Star is ready to start back in a tough race, as it usually is.

Sir Michael Stoute, trainer of Soffika
She ran two lovely races as a two-year-old and goes there in good shape. She has a chance in an open race.

Richard Spencer, trainer of Alabama Whitman and Odyssey Girl
Alabama Whitman is having her first run of the year but has had a racecourse gallop recently and has course form having finished fourth in the Albany. She has Oisin Murphy booked so we're quietly hopeful. Odyssey Girl is race-fit as she ran well at Lingfield the other day, and this is her first go over a mile which we expect to suit her. We have managed to book Silvestre de Sousa and expect her to outrun her odds.

Richard Fahey, trainer of Al Rasmah
We've always liked this filly and were very pleased with her return at Haydock. She's only had three career starts and there could be more to come. She needs to improve going into a race like this, but it's definitely possible.

Roger Varian, trainer of Waliyak
I expect her to run a nice comeback race over this stiff mile and she should get a mile and a quarter in time. She's a progressive filly who should handle any cut in the ground.

Charlie Fellowes, trainer of Onassis
Onassis is looking great. I think the step up to a mile will be good – that will be the top of her stamina – and a deluge for her wouldn't be ideal, but she's in great form and hopefully they come up the middle and we'll ride a very similar race to how we rode Thanks Be last year. She's better handicapped than Thanks Be was and hopefully she'll run a really good race. My only query with her is if it became a real stamina test with the stiff mile it could catch her out. But she ran a stiff 7f at Newcastle last year and won nicely so I see no reason why she shouldn't get home tomorrow.

John Gosden, trainer of African Dream
I've found down the years that these so-called blots on the handicap normally come unstuck. She's come out of her close second to a much higher-rated filly at Newbury last Friday and is, I believe, due to go up 16lb for that effort. That doesn't make her a certainty but she deserves to take her chance, but there is always the bounce factor to consider.

Hugo Palmer, trainer of Tiritomba
I think she's well handicapped but whether she's well enough handicapped to win at Royal Ascot is another matter. Her form isn't bad and she's pleasing me in her work.

FIRST PUBLISHED 6:00PM, JUN 17 2020
Everyone in the stable is very happy that Frankie is back riding for us again. He's been my friend for the past 18 years

Who will relish soft ground in the Oak Tree? Graeme Rodway has the answers Can long-absent Indigo Girl take advantage of a big drop in class in Group 3?