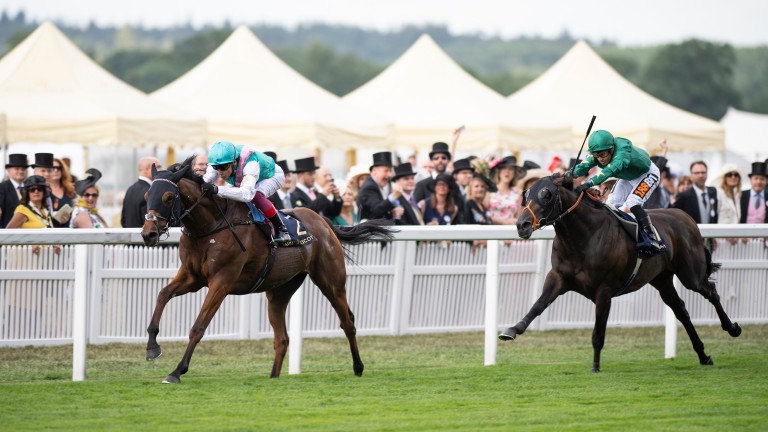 Frankie Dettori was watching a replay of his third winner of the day in the Ascot parade ring when John Gosden joked: “You haven’t lost it yet, you know!”

The 47-year-old celebrated victory on the Gosden-trained Monarchs Glen by holding up three fingers to the stands, acknowledging his 87-1 treble following earlier wins on Calyx and Without Parole.

Asked for his number of Royal Ascot winners, Dettori immediately responded: “59, isn’t it?”

He’s keeping count, as well he should after a day to rank among his greatest in three decades at this meeting, where only two others have ridden more winners.

Dettori missed last year’s jamboree through injury but has already more than made up for it, his victory in the Wolferton so comfortable he could almost smile to himself at his fortune in the last 100 yards.

He said: “When I got to the front I was shaking my head thinking that I couldn’t believe this was happening to me. It’s been a fantastic day. To get three winners in the whole Royal Ascot week is great, but in a day!

Victory had not seemed so straightforward turning for home as Dettori, caught in a pocket on the rail, waited for an opening.

He said: “I was reaching for my can opener because I thought I would never get out. But it opened up and we got a way through.”

Monarchs Glen’s success from Euginio in a first-time hood was also a third winner of the day for Gosden, taking his Royal Ascot tally to 46, and a second of the afternoon for owner Khalid Abdullah, after Calyx.

Gosden said: “It was clear in my mind that if we didn’t win the Coventry and St James’s Palace Stakes it was going to be a very long week, because those two horses were just coming to perfection.

“Monarchs Glen has run a great race. This race is no longer a handicap and we clocked this only about six weeks ago. He’s a little bit wild, this horse. Everyone at home has worked hard with him.

"It didn’t work out in Dubai for him but he came back and we haven’t overworked him. He could go up in grade if he settles enough in his mind."

Gosden added: “Frankie got tucked away in a pocket on the inside but got out. He hasn’t lost it yet, the old boy!”

FIRST PUBLISHED 5:43PM, JUN 19 2018
When I got to the front I was shaking my head thinking that I couldn’t believe this was happening to me